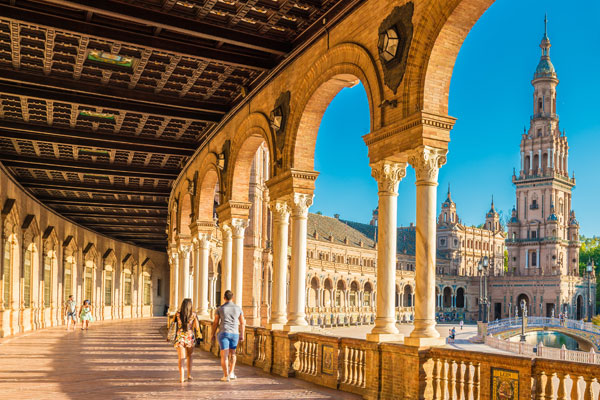 David Whitley goes city-hopping in southern Spain on a tour through Seville, Córdoba and Granada.

The bulk of holidays to southern Spain are targeted at its ever-popular coast – but Andalusia’s appeal is at its greatest when you head inland to its intoxicating, historic and wonderfully lively cities.

Spend a weekend in Seville, Córdoba or Granada, and you’re all set for a fantastic city break, but there’s a lot to be said for linking all three as a holiday over a week or so.

The cities are a couple of hours away from each other by bus or train, and there’s an increasing number of flights going into Seville and Granada, from the likes of British Airways, Ryanair and easyJet, so visitors can fly into one and out of the other with no backtracking necessary.

In the 16th century, Seville was the greatest commercial city in Europe – Spain’s link to the stream of gold pouring in from the Americas, and the hub of a great empire. Not all of Seville’s grand buildings date back to that period, but many of them do.

It’s a relentlessly buzzy, eminently walkable and surprisingly inexpensive city, where tapas and flamenco culture play as big a part in the character as past glories.

“There are plenty of heavily decorated chapels and side rooms full of treasures, but in between are vast expanses of bare, intimidating stone.”

The superstar attraction is Seville’s Gothic behemoth of a cathedral, constructed as an unashamed statement of intent. The 104-metre-tall Giralda tower – formerly a minaret from the days when a mosque was on the site – is generally regarded as the symbol of the city. Inside, the cathedral is so massive that it almost feels empty. There are plenty of heavily decorated chapels and side rooms full of treasures, but in between are vast expanses of bare, intimidating stone. The main event, however, is the ludicrous, grandstanding tomb of Christopher Columbus, which is raised in the air, held up by four statues. The only minor problem is that evidence suggests Columbus’ remains aren’t actually inside. 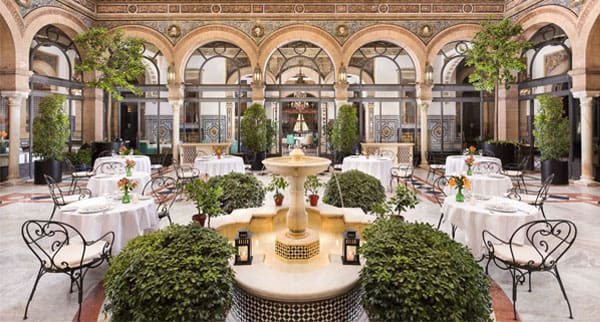 From the cathedral, it’s only a short walk to the Alcázar, one of the world’s most extraordinary buildings. It’s a fortified collection of palaces, of which the star is the Palacio del Rey Don Pedro. Blurring Spanish and Islamic influences, it’s arguably the finest example of Andalusia’s distinctive Mudejar architectural style, with a cornucopia of colourful tiling and keyhole-shaped arches.

The fountain-filled gardens – as seen in Game of Thrones – are also splendid, while the Admiral’s Hall was where Juan de la Cosa drew the first world map, and Magellan planned the first circumnavigation of the globe.

But beyond the big attractions, Seville is a delightful place to wander. The Barrio de Santa Cruz is cobbled, mazy and picturesque, while the Triana neighbourhood on the other side of the Guadalquivir is merrily unaffected. It’s a good spot for no-nonsense traditional restaurants and small ceramics factories that are open to the public.

Stay: The Hotel Alfonso XIII is gloriously decadent, with lashings of superlative tile art, stunning dark wood ceilings and enormous chandeliers. Rooms come in three different styles – Andalusian, Castilian and Moorish – and there are three on-site restaurants. It’s the kind of place for a special treat, with rates from €250 a night, plus tax.
hotel-alfonsoxiii-seville.com 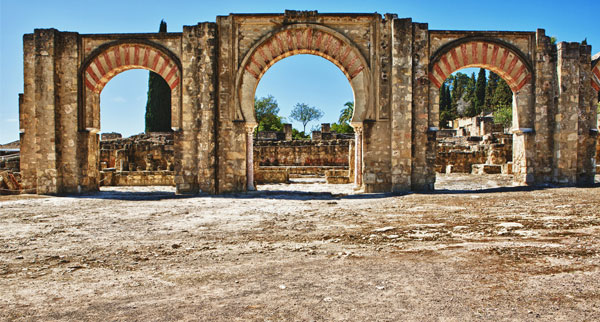 Córdoba is quieter than Seville, but walking through its narrow labyrinth of streets at night is staggeringly evocative. It also has several layers of history to discover, dating back to Roman times.

For almost 500 years, Córdoba was the centre of an Islamic empire in Europe, producing polymaths, scholars and scientists still revered to this day. It was the enlightened hub of the Western world, while most of Europe slumbered through the Middle Ages. Preservation and restoration efforts have been impressive, leaving the city with an air of distinguished wisdom.

The Palacio de Viana, a former private palace that has been passed down through noble families, carries off the refinement vibe nicely. The guided tours around the house are a little take-it-or-leave-it, but the 12 courtyards the house is built around are heart-meltingly beautiful visions of citrus trees, tile art and bubbling water features.

“The oldest parts date back more than 1,300 years, and the whole place is a surreal, woozy maze of red and white arches.”

The Alcázar is more basic than its counterpart in Seville – it was more geared to military than commercial purposes – but it’s a pleasant spot for a stroll along the ramparts and through the terraced gardens before dipping into the exhibitions inside; the one with ancient Roman mosaics is best.

These are warm-ups, though, for Córdoba is home to one of the most impressive buildings on earth. The a was constructed as the principal mosque during the Córdoba caliphate’s zenith. The oldest parts date back more than 1,300 years, and the whole place is a surreal, woozy maze of red and white arches. Hyper-detailed mosaics adorn the mihrab, then you get to the centre of the vast building to see the modern-day cathedral inside it, as if this was all perfectly standard.

Once the sightseeing is over, you can head to the Hammam Al Andalus, an architecturally exquisite restoration of the city’s Arabic-style baths.

Stay: The Hospes Palacio del Bailío is built around several orange and pomegranate tree-filled courtyards. There’s a pool in the central one, and gorgeous Mudejar-style decor inside. Rooms cost from €128 a night.
hospes.com 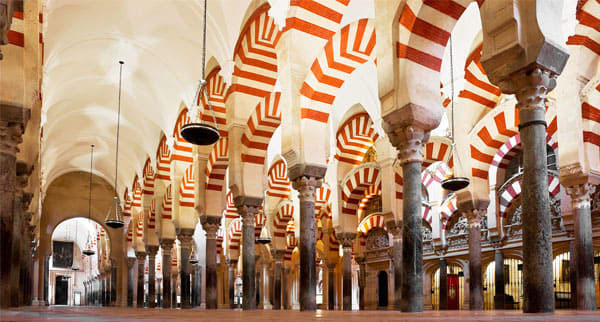 With the Sierra Nevada mountain range as a backdrop, Granada is worth visiting on location alone. But its history also makes it a little bit special. It was the last bastion of Islamic rule in southern Spain, finally being reconquered in 1492. And the final holdout was the astonishing hilltop Alhambra complex, a mini fortified town in its own right, with lavish gardens, palaces and ramparts.

It’s justifiably popular, making buying tickets in advan ce a near necessity – especially if you want to get into the Nasrid Palaces, which are generally regarded as the highlight of the visit.

Otherwise, the beautifully kept gardens are full of nooks and crannies, going from showpiece fountains to peaceful hedged alcoves within seconds. And the Alcazabar is a hugely intimidating defensive structure, with imperious views over the city and the Albaicín neighbourhood.

“Inside it has been turned into a museum that focuses partially on the Sephardic Jews that once called Granada home.”

The Albaicín is the historically Muslim neighbourhood, and it still has flavours of North Africa in its baffling maze. Hookah lounges, tea cafes and stalls selling colourful fabrics are par for the course in the main streets, while heading upwards will eventually lead to the Mirador de San Nicolás. This is the best lookout for getting those photos of the Alhambra.

The Albaicín is home to several private palaces, of which the Palacio de los Olvidados is a good example. Inside it has been turned into a museum that focuses partially on the Sephardic Jews that once called Granada home, but mainly on the Spanish Inquisition and the torture methods used to extract confessions of heresy. This could be tackily done, but ends up fascinating. 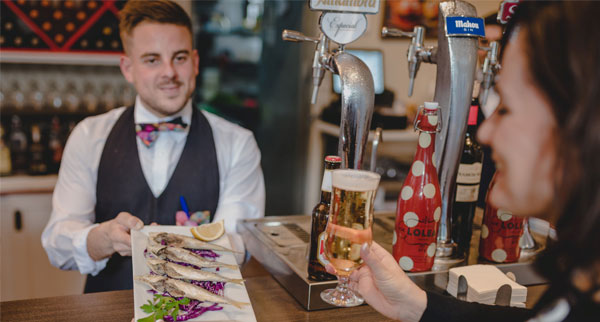 The other key attraction in Granada is the Capilla Real, where the monarchs who funded Christopher Columbus and united Spain – Ferdinand and Isabella – are buried in a predictably ostentatious marble mausoleum.

Granada’s not all about the past though – it’s a great place for a ‘tapas crawl’. There’s a strong tradition of serving up a small dish with every drink ordered, so an evening meal can easily take place across several venues.

“The other key attraction in Granada is the Capilla Real, where the monarchs who funded Christopher Columbus and united Spain are buried.”

The €40 evening jaunt around the city’s tapas haunts with Granada Tapas Tours is a great way of getting to know Granada’s food scene. Different joints are visited each night, and the dishes are varied too. Granada may be historic, but things don’t have to remain the same.

Stay: Keeping up the North African vibe, the Hotel Gar-Anat is one of several riad-esque hotels in historic buildings. It ladles on the charms, with quotes from poets all over the walls and beautiful wood carvings among its design touches. Standard rooms start at €119.
hotelgaranat.com 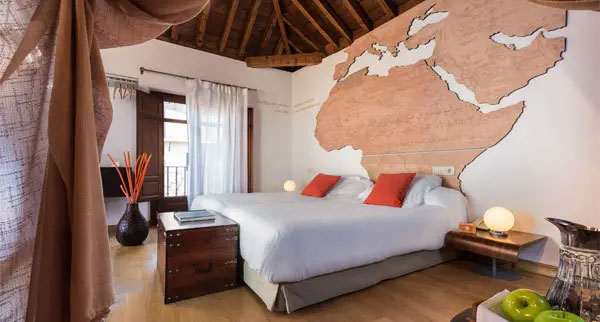 Super Break offers three nights in Seville, staying at the four-star Silken Al Andalus Palace Hotel, from £246 per person. A three-night break at the four-star Las Casas de la Juderia Córdoba starts at £305. Both are based on B&B stays, with flights from Stansted in mid-May.
superbreak.com/agents

Osprey Holidays offers a four-night twin-centre to Seville and Granada from £399, departing May 19. Price includes two nights at the H10 Corregidor in Seville and two at the Hotel Casa Del Capitel Nazari, room-only, flights from Gatwick and a bus transfer from Seville to Granada.
ospreyholidays.com