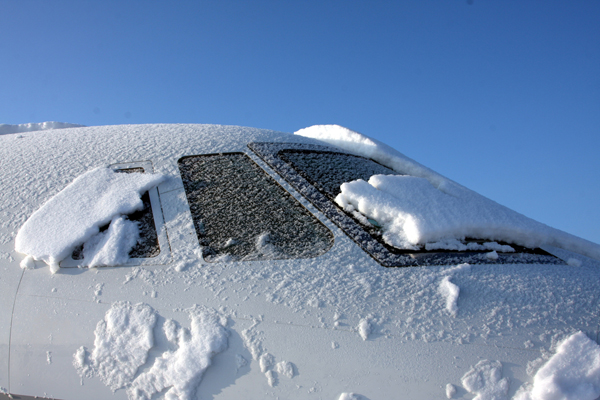 A night of heavy snowfall affected roads and railways with Bristol, Bournemouth and Cardiff airports suspending flights this morning.

Airline passengers were urged to check their flights were operating before travelling with around 40 British Airwasys flights reportedly grounded this morning from Heathrow to destinations in the UK, Europe and New York.

Around half a dozen early morning departures were cancelled from Bristol airport affecting Bmi Regional and easyJet. A series of inbound flights were also cancelled, diverted or delayed with the airport closed until midday.

Met Office weather warnings for snow and ice remain in place for many areas of the country today after much of southern and south-west of England were affected.

An amber warning for snow across the Thames Valley and west of London is in place until 11am. Yellow warnings for snow and ice cover southern, eastern and north-eastern England, as well as parts of Wales and Scotland, until the afternoon.

A total of 95 cancellations were reported from Heathrow yesterday due to the snow.

There were also short delays of 30 minutes on small numbers of departures from Heathrow.

Of the 95 cancellations, 22 of them were BA flights leaving the London hub.

And BA warned this morning: “We are expecting adverse weather conditions across parts of south-east England on Friday 1 February, which is likely to affect some of our short-haul flights.

“We recognise the uncertainty that the bad weather may be causing customers, and have therefore introduced flexible rebooking options for all customers on short-haul flights flying to/from London Heathrow.

“If your flight has been cancelled, please do not travel to the airport. We have a policy in place outlining the options available to you and how to make changes to your booking.”

Flybe repeated a warning issued earlier in the week about the impact of the winter weather on services up until today, saying it, like very other airline, has minimum acceptable weather conditions in which it can safely operate.

“Please be assured that we will be doing our best to operate our services as normal, taking into consideration any adverse weather conditions,” the regional airline added.