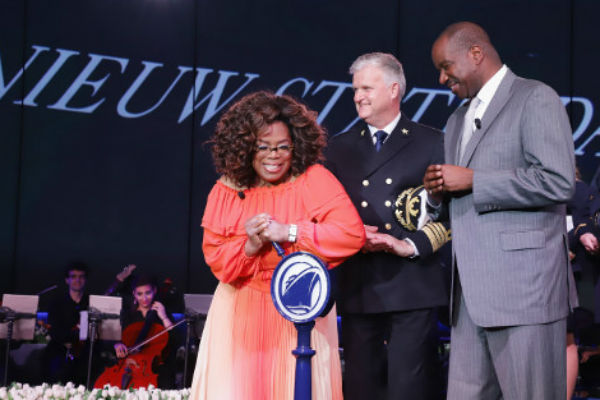 “We are deeply honored to have Oprah Winfrey serve as the godmother of our newest ship in a celebration of our shared belief that travel has the power to open minds, build connections and inspire shared humanity across cultures and people,” said Ashford.

The ceremony in Fort Lauderdale followed a three-day ‘Girls’ Getaway’ cruise to the Caribbean.

Gayle King, editor-at-large of O, The Oprah Magazine and Winfrey’s best friend, joined her on the cruise, along with several other senior editors from the magazine.

Winfrey said: “It’s been an incredible experience to see people from across the world come together with one mind and celebrate themselves, honor themselves and honor each other. Everybody gathered, made friends and connected to people they didn’t know because they felt like they had met themselves on some level. I have never seen anything like it.”

Nieuw Statendam was built at Fincantieri’s Marghera shipyard in Italy in November and will sail its inaugural season from Ft. Lauderdale to the Caribbean until April.

The ship will spend the summer sailing Norway, the Baltic and Iceland before relocating to the Mediterranean in autumn.

The 2,666-passenger ship is the line’s second Pinnacle-class vessel and the sixth in the company’s history to carry the name Nieuw Statendam.