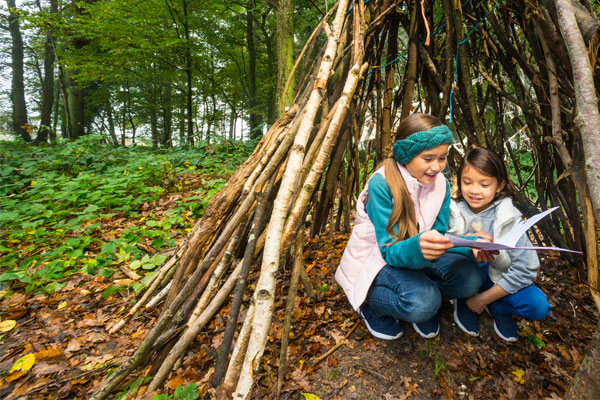 Biking, baking and bounding around an adventure course – Lucy Huxley gets back to nature on an action-packed family holiday in France.

There are no characters, no theming, no music and no bright colours at Les Villages Nature Paris. Yet since last October, the eco-resort, built in a forest around a lake, has been marketed as Disneyland Paris’s eighth hotel.

This positions it alongside the likes of the Disneyland Hotel, Disney’s Newport Bay Club, Hotel New York and Sequoia Lodge.

But while the new marketing should definitely help raise awareness among UK guests – and the fact that it’s just 10 minutes from the French theme park is a key selling point – there’s very little to suggest a link to Disney when you are there.

“The eco-resort, built in a forest around a lake, has been marketed as Disneyland Paris’s eighth hotel.”

Since it opened in 2017, as a collaboration between Pierre & Vacances, Center Parcs and Disneyland Paris, it has been steadily growing in popularity with top-selling Disneyland Paris agents such as MagicBreaks.

But what is it that really sets Les Villages Nature apart when it comes to a fun family break? 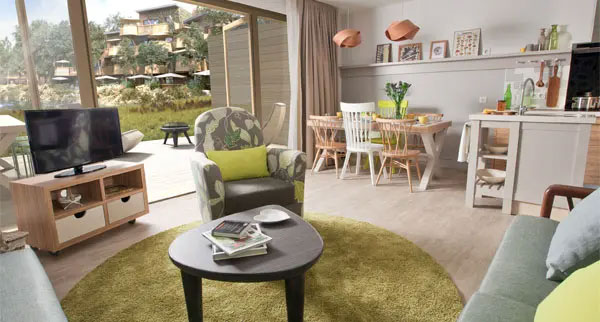 I travelled with my nine-year-old daughter, Marijke, on Eurostar to Marne-La-Vallée station in Disneyland Paris and caught the number 42 bus from outside the terminal to Les Villages Nature.

It dropped us at the West Entrance to the resort, where we checked in, collected our wristbands and hopped on an electric minibus, the Shuttle Express, to La Place du Marché, the main promenade of shops and restaurants in the resort.

From here, we picked up a map in The Welcome House, and headed to our one-bedroom apartment on the second floor of a small, low-rise block. 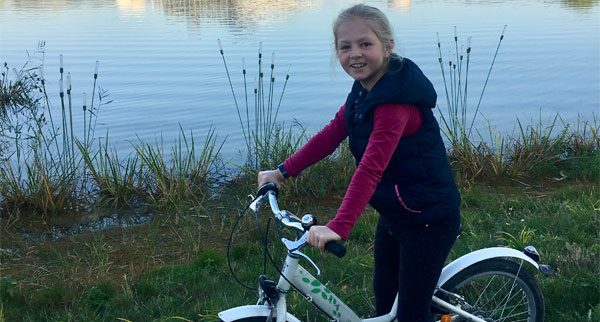 Other apartments sleep up to four, while cottages sleep between four and 12, and each one has a small kitchen, dining area, lounge, bathroom and bedrooms, all decorated in natural colours with leaf or bird-print fabrics and art.

Our wristbands doubled up as room keys, so we quickly dropped our bags and headed straight for the cycle hire.

“It was so quiet, we barely saw another person, which was surprising given it was half-term for both the French and English.”

If you drive to Les Villages Nature you can bring your own bikes, which are definitely the best way to get around. We chose from the huge selection available – bikes with baskets, panniers, child seats or pull-along carriages for kids, plus mountain bikes and tandems. We cycled along the lakeside path, past ducks, swans, an adventure play area, crazy golf course, over a bridge and to the conveniently located cycle parks, which can be found everywhere around the resort. It was so quiet, we barely saw another person, which was surprising given it was half-term for both the French and English. 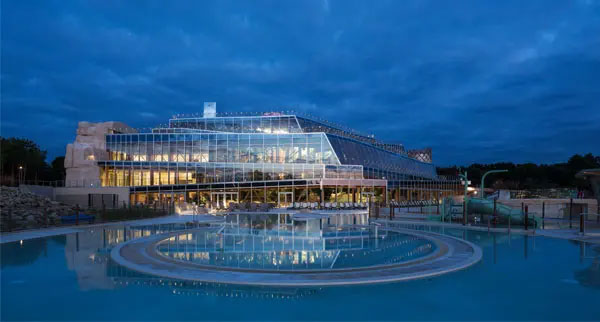 We then headed for the Aqua Lagoon. This huge asymmetrical glass structure is home to massive indoor and outdoor pools, heated year-round to 30C by a natural thermal spring.

Our wristbands let us through the turnstiles and into an oasis of pure fun, with all manner of different pools, water slides and play areas – from a ‘beach’ complete with a wave machine that starts every half-hour, to a rock-climbing pool where if you slip, you fall in!

“There are outdoor pools with monkey bars, water netball, floats and our favourite, the crazy river.”

There are toddler and baby play areas with toys, water sprays and jets; or for older kids, seven huge water slides, some with inflatable rafts, offering varying levels of excitement. Plus there are outdoor pools with monkey bars, water netball, floats and our favourite, the crazy river, which propels you round in a strong current, under waterfalls and down little slides.

Three hours later, and with fingers like prunes, we emerged happy, exhausted and hungry, so headed to Vapiano, an Italian restaurant along the promenade, for soup, pasta and pizza, before heading back to our apartment and falling asleep instantly. 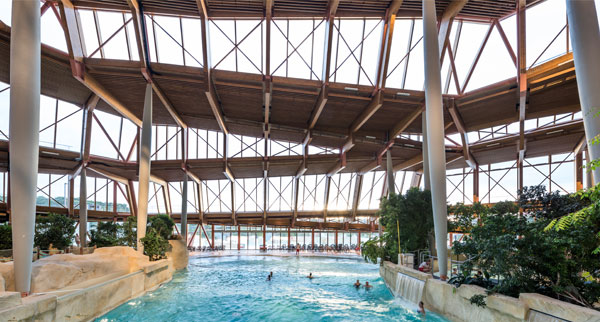 The next morning, we cycled in the other direction past a deserted outdoor beach, complete with volleyball and boating – no doubt popular in the warmer months – to the working BelleVie Farm.

There, we donned our aprons and hairnets alongside 16 other parents and kids (all French) for a one-hour breadmaking course. The two teachers, Antony and Xavier, were excellent, explaining everything in French, then in English for our benefit, teaching us where flour comes from, how it’s grown, harvested, ground and sieved, before the kids actually got their hands messy.

Then they weighed out their flour, yeast, salt and water, made and kneaded the dough, and formed it into shapes ready for proving and baking.

“We headed back to the farm so Marijke could feed the cows and then take a half-hour horse ride through the forest.”

We were supposed to return at 2pm to watch it go into the ovens, but Marijke and I were otherwise engaged – attached to karabiners, clips and pulleys, several feet up in the trees on the parkour adventure course, a slightly more hardcore version of Go Ape in the UK.

It’s more intense because once you’ve had your safety briefing, you’re on your own, and kids are allowed to go around the course without parents. It’s not dangerous, but it’s not easy either, and I frequently had to reach forward past my daughter to help two six-year-old boys in front of us to get their clips and pulleys in the right place, which held us up and was a slight downside to an otherwise phenomenal facility.

After lunch in Chez Meunier Bakery, we headed back to the farm so Marijke could feed the cows and then take a half-hour horse ride through the forest. Each child is led by their own parent and the ponies walk very sedately – perfect for young kids who have never been on a horse before.

We finished the day with another trip to the Aqua Lagoon, followed by a delicious authentic French meal of boeuf bourguignon in on-site bistro Cépages. 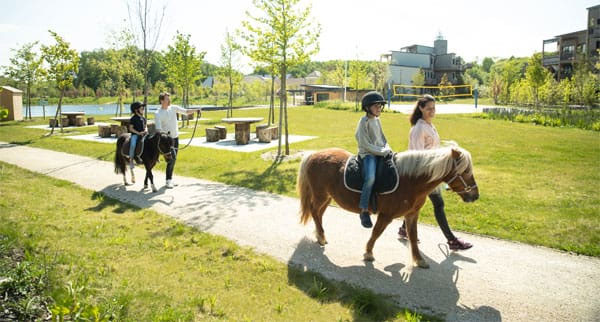 The morning of day three saw us head out on our bikes to collect croissants from the boulangerie and freshly-squeezed orange juice from the Franprix supermarket. Then we cycled back to the West Entrance, where we were collected for our day at Disneyland Paris.

We were met by a VIP guide, Bilkis, who was so lovely with my daughter that within 10 minutes, I had been ditched and Marijke was happily skipping along holding Bilkis’ hand and chatting 19 to the dozen.

“We head out on our bikes to collect croissants from the boulangerie and freshly-squeezed orange juice from the Franprix supermarket.”

Bilkis took us to all the best rides in both the main park and Walt Disney Studios, each time taking the Fastpass line to avoid the long queues. It soon became clear my daughter is something of an adrenaline junkie, so her favourite rides were Rock ‘n’ Roller Coaster starring Aerosmith, RC Racer and Big Thunder Mountain, while I was enthralled by the Ratatouille simulator. Both of us loved Disney Stars on Parade – a must for every visitor.

We stayed so late in the parks that we had to grab a takeaway for the way home – essential fuel to give us the energy we would need for a repeat performance the next day.

After a second brilliant day at the parks, Marijke asked if we could get back to Les Villages Nature in time to go to the Aqua Lagoon again. Something has to be pretty awesome if it’s able to drag kids away from Disneyland Paris!

A three-night self-catering stay in a Clan Comfort Cottage during the Easter holidays costs from £607 in total, for two adults and two children.
villagesnature paris.co.uk