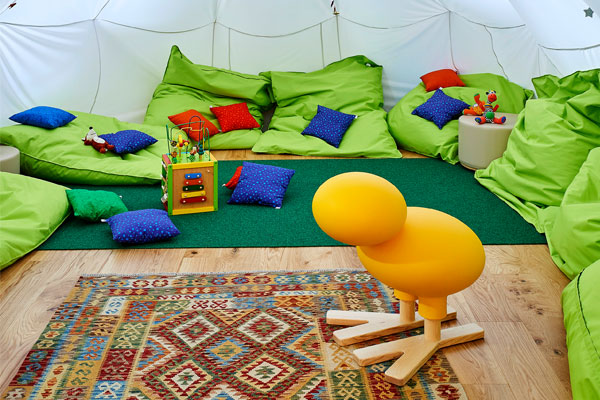 Can you take a young child on a city break? Joanna Booth tests the water.

Unlike peaches and cream and the proverbial horse and carriage, toddlers and city breaks aren’t considered a classic pairing. Short legs and even shorter attention spans make urban adventures a higher-risk business than a pure beach holiday, and many parents assume they’ll have to put the bright lights and culture to one side until the kids near double digits.

Reassure them that this isn’t the case. With a certain amount of compromise, and the right accommodation, families can introduce their youngest members to the joys of a good city break – as I discovered when I took my two-year-old son to Lisbon.

A stay to suit

After the mercifully short flight, we checked into our new home, Martinhal Chiado Lisbon. On a steep, cobled street in the central Chiado district, there’s little evidence from the kerb to suggest the family paradise that exists within this handsome 19th-century converted townhouse – except a glimpse of the Herbie-like reconditioned BMW Isetta that sits as a play space in the relaxed in-house cafe.

“The decor pleases guests of all ages, with vintage cartoon artwork bright enough to delight kids.”

But once inside, it’s evident this is not your average city hotel. The decor pleases guests of all ages, with vintage cartoon artwork bright enough to delight kids, but stylish enough to placate parents. Furniture is sneakily child-friendly – curved edges abound, but the choice feels design-led with an added bonus that any inadvertent headbutts hurt less.

Ride up in the lift, and you’ll soon see why the hotel brands its 37-strong accommodation ‘family suites’ -– even the studio apartments come with fully equipped kitchens. 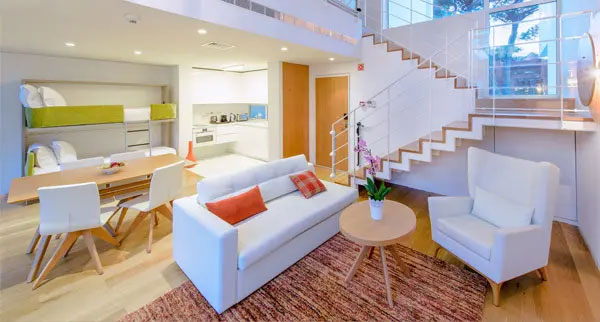 Our light, airy one-bedroom deluxe apartment, from £229 per night, was perfect. At just over two, we chose to put Dexter in a cot in our bedroom, though if he’d been much older, we would have used one of the handy bunk beds that fold back into the living room wall.

Having two separate spaces meant our evenings didn’t involve sneaking around in silence – we could open some wine, order takeaway and throw open the windows to watch the city lights while Dex slept.

“The secure kids’ club has a range of zones suited to different ages, from baby-focused soft play to a climbing wall for older children.”

To one side of the lobby, the secure kids’ club (the door is always locked so there’s no risk of any child managing to wander out) has a range of zones suited to different ages, from baby-focused soft play to a climbing wall for older children, plus a space with toys that parents and kids can use together throughout the day – a great initial ice-breaker for toddlers who might be resistant to unfamiliar daycare.

Kids’ club hours run from 9.30am to 5.30pm, plus there’s a pyjama club from 6pm-10pm, allowing parents to enjoy Lisbon’s nightlife. If they’re worried about straying too far, the bottle-lined, barrel-vaulted bar and restaurant By The Wine is just across the street, serving local dishes and vintages from one of Portugal’s oldest wineries. 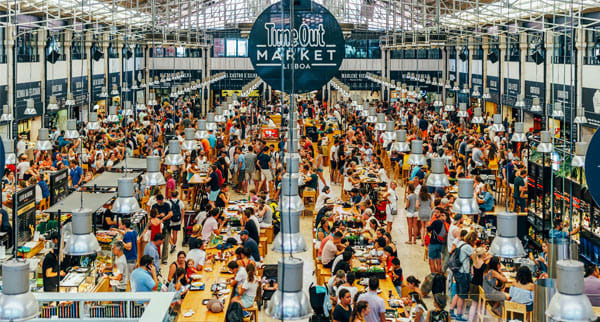 A fresh and extensive buffet breakfast is served in the hotel’s M Cafe, and this friendly spot has a healthy yet appealing kids’ menu for lunch and dinner, but we wanted to get out and about to sample the city’s cuisine.

Luckily for us, just a short walk downhill to the riverside brought us to one of Lisbon’s culinary highlights, the Time Out Market. Here, alongside meat, fish, fruit and flower stalls that provide an entertaining ramble for a toddler, you’ll find some of the city’s best street food.

We plonked ourselves down at one of the communal tables and introduced Dex to Portugal’s national favourite bacalhau, in the form of salted cod croquetas.

“The largest indoor aquarium in Europe is bound to be a hit with any child, with its vast central tank home to sharks, manta rays and a sunfish.”

In my book, a good city break includes plenty of eating, watching the world go by, and sightseeing. We managed to introduce Dex to a little of all three, taking him for an amble along the banks of the Tagus, spotting the colourful azulejo tiles in the streets around our hotel, and to the Lisbon Oceanarium. The largest indoor aquarium in Europe is bound to be a hit with any child, with its vast central tank home to sharks, manta rays and even a sunfish, plus additional habitats for penguins, sea otters and jellyfish.

But Lisbon isn’t entirely child-friendly. Its narrow, steep streets are cobbled, making long distances by buggy tricky, and in summer, the sun reflects to glowingly beautiful but unrelentingly hot effect off its creamy-toned stone. Having a kids’ club on hand meant we could visit the many Miradouro viewpoints overlooking the city, wander the backstreets of the old Alfama neighbourhood and dodge across the road between the city’s famous yellow trams without dragging a hot, crotchety toddler with us. 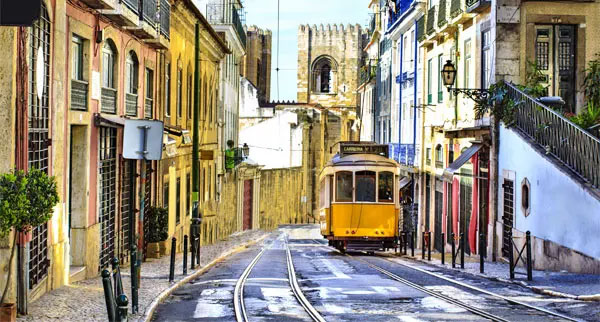 Where Lisbon really excels is in its proximity to the beach, allowing families to compromise and enjoy a combination of sightseeing and sand in one trip.

After a few days in the city centre, we moved to sister property Martinhal Cascais, where our deluxe room started from £162 per night.

Just 30 minutes outside the city centre, the sprawling coastal hotel provides not only a twin-centre option but also an alternative base for the entire trip – parents could easily head into the city for a day of concentrated sightseeing while leaving a toddler in the kids’ club, if they’d rather explore entirely unfettered. Instead, we used the time Dex was happily ensconced in the bright and airy clubhouse to relax in the sun and enjoy a massage at the spa.

“There’s also a complimentary children’s buffet and a kids’ play corner manned by a member of the kids’ club team.”

But a successful holiday is about more than merely childcare. Our shared experiences were the highlight here – running in and out of the shallow, warm kids’ pool, going wild in the large outdoor playground with a sandpit, swings and trampolines, and enjoying Dexter’s first Portuguese pastel de nata (custard tart) at the breakfast buffet.

Often, dining in a family-friendly hotel can feel like a necessity rather than a pleasure – one of those sacrifices that have to be made when you travel with a toddler. Not here. With its floor-to-ceiling glazing, white tablecloths and bucket-sized gin glasses, the main restaurant, O Terraço, delivers grown-up food to match its atmosphere. Yet there’s also a complimentary children’s buffet and a kids’ play corner manned by a member of the kids’ club team, so we could all dine together, then linger over our wine while Dex was entertained.

It may not have been quite the same as our weekend jaunts pre-children, but our holiday to Lisbon with a toddler really worked. We saw the city, we had a break – and Dex has been asking to go back to Portugal ever since. 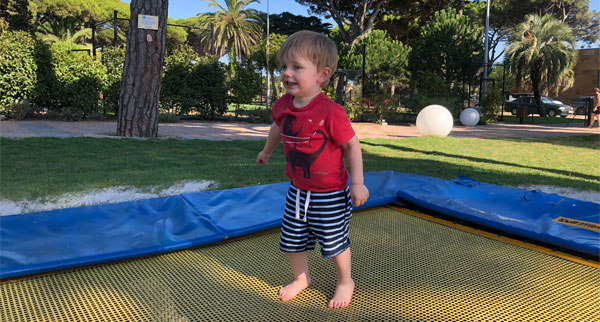 Screen team: Just for once, forget your usual screen time limits. Pre-load a tablet with episodes of their favourite shows and age-appropriate games and let them go wild.

Accidents happen: Little accidents don’t feel so little mid-flight. If it’s early days without nappies it won’t hurt to pop a pair of pull-ups on for the flight to avoid a potty-training mishap.

Snack time: Snacks are currency for toddlers. Buy quiet time and good behaviour on flights with bananas, breadsticks and biscuits. Take more than you think you could ever need – they’ll take the edge off any delays.

Bag the basics: Put Calpol, wipes, and a few extra nappies in your hand luggage, along with PJs and any teddies/blankets they can’t sleep without. If your checked bag goes missing, you’ve got the basics.

Splash zone: Bring extra outfits, and not just for your toddler. Stuff an extra T-shirt that fits both parents into your hand luggage – it’s a lifesaver when the apple juice or leaky nappy goes all over you too.