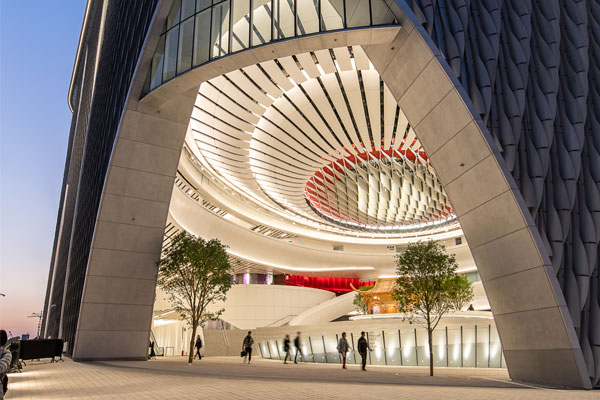 Hong Kong has long held the affections of British visitors, whether as a stopover spot to break up a longer journey, or as a destination for an adventurous Asian city break.

Its traditional market has been made up of repeat visitors, often aged 55 or over, staying for an average of four to five days.

But the latest tourism board campaign, Hong Kong Like a Local, has been targeting 25 to 40-year-olds, highlighting the destination’s different districts and showing agents a fresh way of selling the city.

As well as established neighbourhoods offering a window into the way of life here, emerging areas and new infrastructure projects are set to transform the visitor experience. Look out for the West Kowloon Cultural District, which is opening in stages over the next few years, plus the new Hong Kong-Zhuhai-Macao Bridge and Express Rail Link connecting Hong Kong with mainland China. 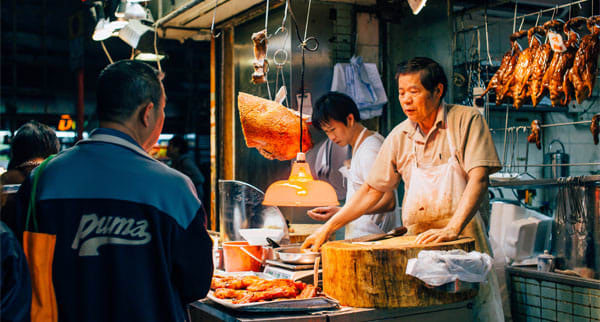 Head to Sham Shui Po and you will find yourself in an alternative corner of the city. It is set on the boundary of New Kowloon and can be reached via MTR (Mass Transit Railway) stop Sham Shui Po, with a single ticket starting at about £1.20.

Visitors to this working-class district can explore exotic markets and an interesting history. The area has remained popular with designers since its textile manufacturing heyday in the 1950s and 1960s, attracted by affordable fabrics and accessories. Today, there is a street dedicated to each product, with beads sold on Yu Chau Street, ribbons on Nam Cheong Street and clothes at wholesale prices on Cheung Sha Wan Fashion Road, while Ki Lung Street is also known as ‘button street’.

The themed selling continues with electronic gadgets sold on Apliu Street and toys on Fuk Wing Street, while on Pei Ho Street, there are shops and stalls selling everyday goods, as well as food at reasonable prices. 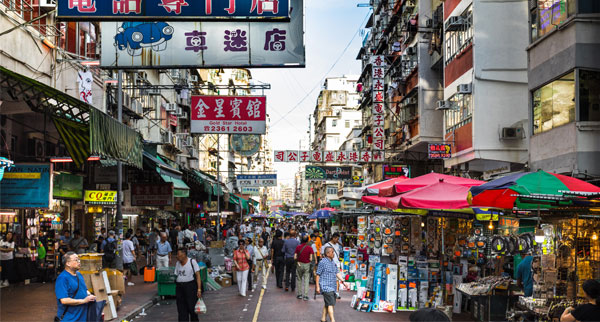 Sham Shui Po is ideal for those wanting to eat traditional specialities and street food. On offer are beancurd snacks and drinks, noodle cafes and homemade Chinese sweets, some of which come recommended in the Michelin guide to Hong Kong Street Food.

The area’s architecture has plenty of stories to tell, too. As one of the oldest districts, it played a significant role in shaping the local way of living, particularly in its development of social housing.

“On offer are beancurd snacks and drinks, noodle cafes and homemade Chinese sweets some of which come recommended in the Michelin guide.”

Mei Ho House, on the Shek Kip Mei Estate, was part of the first generation of public housing in the city. Today, it is Grade II listed and used as a youth hostel, and is home to the Heritage of Mei Ho House Museum exhibition, which tells the story of the development of housing in Hong Kong from the 1950s to 1980s. 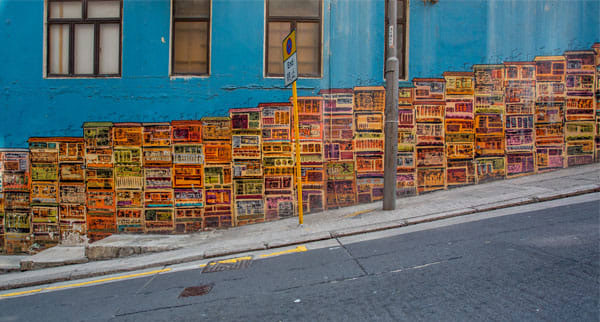 Old Town Central on Hong Kong Island is the city’s most historic neighbourhood, and home to Possession Street, which marks where the British took ownership of Hong Kong in 1841.

Traditional sits alongside contemporary here, with old family businesses found next to modern galleries, boutique shops and popular international restaurants. That combination is most evident at Tai Kwun on Hollywood Road, which was once the colonial-era central police station, magistrates’ court and prison, but reopened last year as a cultural and artistic space with places to eat and drink (open from 11am-11pm daily).

Similarly, PMQ (Police Married Quarters) on Aberdeen Street has recently been transformed into a creative hub with artists’ studios, restaurants and shops.

Situated throughout the area are long-established markets such as Graham Street Market, which dates back 160 years and sells fresh food produce and Chinese specialities.

Pottinger Street has stalls along its rising stone slab steps selling clothes, costumes and trinkets, while Hollywood Road antiques market is a great place to browse for retro and vintage finds.

There are several Chinese temples in the area that are free to visit. The most famous is Man Mo Temple on Hollywood Road, built between 1847 and 1862, where a thick fug of burning incense hits you as soon as you enter, as locals pray to the temple’s namesake gods of literature (man) and war (mo). 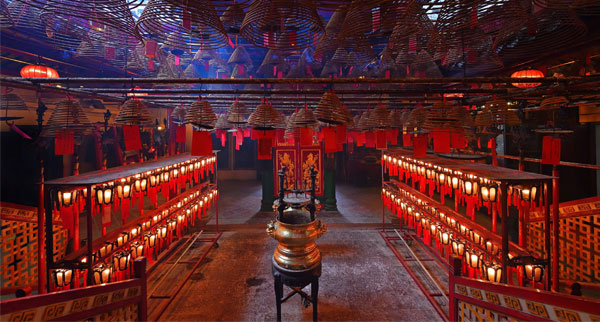 Hong Kong’s growing street-art trend can be seen in various spots, most notably on Shing Wong Street and Tank Lane, where North Korean artist Xeva has depicted an image of Bruce Lee, and in a much-photographed mural of the city’s old townhouses, painted on the walls of the GOD store on Hollywood Road.

Look out for locals pausing for lunch at one of the area’s traditional noodle cafes, or grabbing a snack at the Tai Cheong Bakery, which has been famed for its egg tarts since it opened in 1954.

“Old Town Central is a cool area for drinks, with a selection of hidden speakeasy bars such as Mrs Pound.”

If your clients fancy a taste of the action, recommend a cup of authentic Hong Kong milk tea, made from black tea and condensed milk, and strained through a long muslin bag, earning it the nickname ‘stocking milk tea’. Lan Fong Yuen cafe on Gage Street is a good place to try the real thing.

At night, Old Town Central is a cool area for drinks, with a selection of hidden speakeasy bars such as Mrs Pound, which is found behind an old stamp shop facade on Pound Lane. 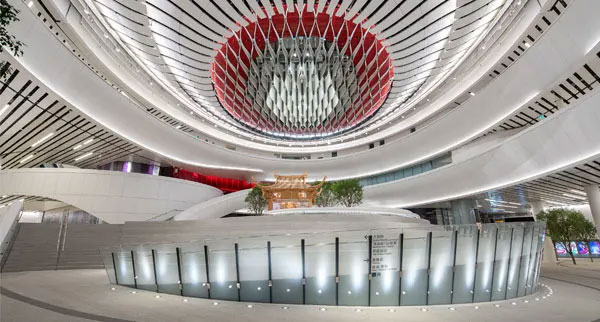 West Kowloon Cultural District is the one to watch. Located on the harbourfront, it will offer performance spaces, museums, exhibitions, arts and events. It has been in a phased opening since last year, with more to follow over the next few years. Eventually, the development will provide a new cultural quarter for locals and visitors alike. When fully open, the building complex will have the capacity to host festivals and events for up to 10,000 people.

Key to that is the Xiqu Centre, a performing-arts venue that has a 1,050-seat Grand Theatre plus the 200-seat Tea House Theatre. It is dedicated to the promotion of Cantonese opera and other traditional Chinese theatre, and is located on the eastern edge of the district. It can be reached from the new Hong Kong West Kowloon Station (Express Rail Link Terminus) and Austin MTR station.

Scheduled to open in 2020, the M+, a museum of visual culture, will showcase 20th and 21st-century visual art, design and architecture, as well as moving images from Hong Kong and around the world. The nearby M+ Pavilion has already opened and is being used as a site for exhibitors until the museum is completed.

M+ and M+ Pavilion are in the Art Park on the waterfront, where the public can already access a promenade providing views of Victoria Harbour and Hong Kong Island.

Also housed in the park is Freespace, a ‘black box’ theatre that will hold up to 900 people, and is scheduled to open in April, and the Lyric Theatre, which will host performances of local and international dance and theatre.

In addition, the Hong Kong Palace Museum is set to open in 2022, with displays of Chinese art and cultural artefacts from the imperial collection of the Palace Museum in Beijing.
westkowloon.hk/en

Exploring Macao beyond its glitzy casinos
Experience Chongqing’s natural beauty on an escorted tour in China
The best things to see, do and eat in Manila, Philippines