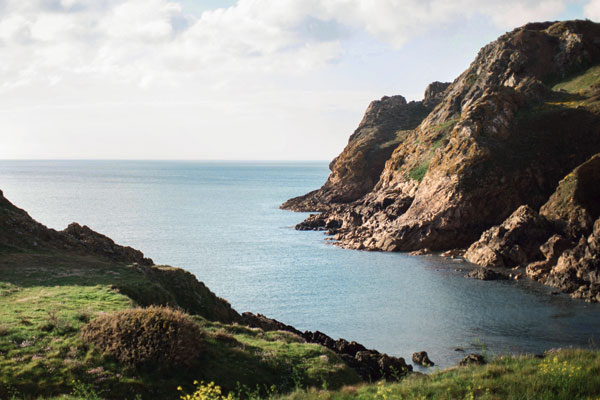 The charms of this Channel Island are there for the taking, writes Eleanor Kirk.

Driving around Jersey’s country lanes, we see rolling green fields, rocky coastlines, sprawling clifftops and idyllic villages. The island is just nine miles wide – smaller than Greater London – but is beautifully diverse and packs in an abundance of scenery.

It might be most famous for Jersey royal potatoes and Jersey cows, but there’s far more to the island than that. Whether your clients are looking for a foodie feast, an audacious adventure or a cultural caper, you can find it all on this Channel Island.

Our trip to Jersey coincided with the annual food festival Tennerfest, when restaurants across the island put together special three-course menus that showcase the island’s talented chefs and delicious cuisine, for a bargain £10.

Locally caught seafood is a speciality, as the cold waters surrounding Jersey are prime living quarters for oysters, mussels, lobster and crabs.

One of the island’s top hotels, The Atlantic, also takes part in the festival. Executive chef Will Holland focuses on sustainable local produce, and the menu incorporates velvety Jersey cream, sweet Jersey royals and other local ingredients. 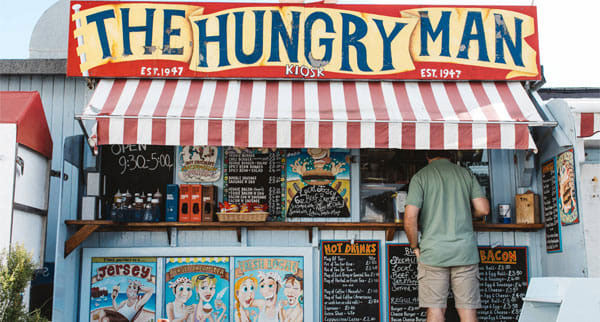 But you don’t have to be in a premium restaurant to experience Jersey’s incredible food. The Hungry Man, an alfresco food stand in sleepy Rozel Bay, is a firm favourite among tourists and locals alike. Think double-stacked burgers, salty chips, and slabs of gooey cake. If you’re feeling particularly brave, you could try the Double Decker Health Wrecker – that’s a double cheeseburger with double bacon.

“It was somewhat strange to eat something Kazz had just plucked from the ground, but we soon got into the swing of things.”

For something a little healthier, we joined Kazz and his dog Ella on a Wild Adventures foraging tour on the west coast of the island. It was somewhat strange to eat something Kazz had just plucked from the ground, but we soon got into the swing of things, nibbling on rock samphire and learning about the medicinal qualities of a variety of plants.

At the end of our two-hour walk, Kazz surprised us with his homemade sparkling elderflower wine, hidden in the undergrowth in recycled prosecco bottles. It’s totally delicious, and the perfect accompaniment to the stunning view across St Ouen’s Bay. 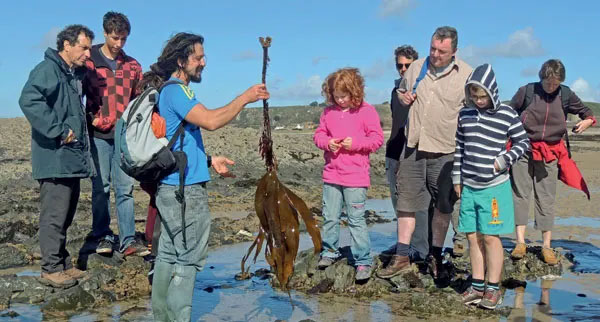 The best way to see Jersey’s stunning scenery is by bike. We cycled 16 miles from St Helier to St Brélade, via St Aubin, on a trail that had everything from rugged coastline to dense woodland.

You don’t need to be an experienced cyclist to enjoy the island’s many cycle routes. I hadn’t been on a bike in nearly 10 years when I found myself whizzing down a steep incline alongside St Brélade’s Bay.

“A baby dolphin broke through the surface of the water alongside our boat, leaping into the air before gracefully diving back into the depths.”

All cycle routes are signposted, although this didn’t stop me from accidentally joining ‘cycle route one’ – the most challenging of the island’s routes. It was only when I found myself on a rocky, almost vertical, incline that I realised something was amiss, and quickly rejoined the gentler path I thought I’d been following all along.

If adventure is what you’re after, though, look no further than a rib boat ride with Jersey Seafaris. Our destination was the Ecrehous, a small group of rocky islands about six miles from Jersey. 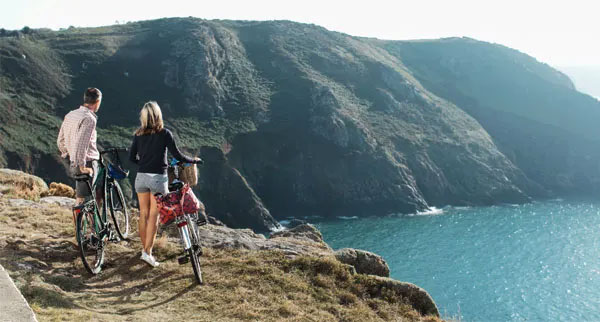 But the main attraction was the playful dolphins we spotted along the way. Slowing down to a stop in the blue waters of the English Channel, we saw a flash of movement beneath the waves. Suddenly, a baby dolphin broke through the surface of the water alongside our boat, leaping into the air before gracefully diving back into the depths.

“Wow! That’s probably the youngest dolphin you’ll ever see in the wild,” said our guide.

“The island was deserted when we visited, leaving us free to investigate its rock pools and take in the beautiful views.”

There was even more marine life in store, as we spied a family of seals lounging on a rocky outcrop. We didn’t approach, as they get spooked easily, but it was the first time any of us had seen these creatures in the wild, and it was truly breathtaking.

We carried on to the Ecrehous and disembarked to explore an abandoned island. Although there are holiday homes that are used during the summer months, the island was deserted when we visited, leaving us free to investigate its rock pools and take in the beautiful view from the island’s peak.

It was so quiet and serene, it felt as though we’d stumbled across our own desert island. 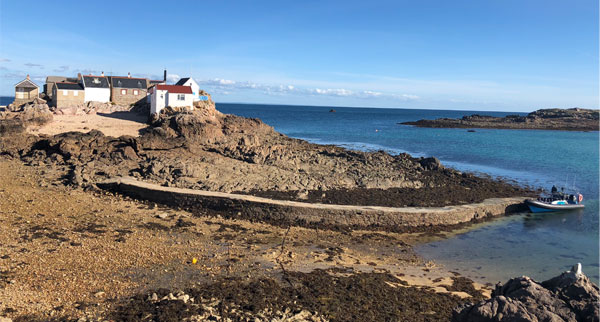 Jersey is steeped in history, but is perhaps best known for being the only part of Britain to have been occupied by Germany during the Second World War. During their occupation, the Germans built an extensive network of tunnels on the island, which are now open to the public as a museum.

The Jersey War Tunnels trace the lives of the islanders while under German rule, as well as those of the Germans who lived on the island. Walking through the tunnels is a sobering experience, especially when you get a glimpse of the unfinished sections teeming with debris and jagged rocks.

But Jersey’s history doesn’t begin with the Second World War. Mont Orgueil Castle, known as Gorey Castle to English-speaking locals, is a medieval fortress that towers over Gorey Harbour.

The castle has protected the island from invaders on countless occasions and was key to the island’s defence from the French more than 600 years ago. The building itself is a myriad of winding staircases, secret passageways and hidden rooms. Those who can find their way to the uppermost turrets of the fortress – though they’ll need to climb to the top of the hill to access it – will enjoy spectacular views of boats bobbing in the harbour’s sparkly water.

Jersey has also been defended by a second fortress, Elizabeth Castle, located in St Aubin’s Bay and accessible on foot only at low tide. At high tide, visitors can take an amphibious vehicle to the Tudor castle from St Helier.

Elizabeth Castle provides a more interactive visitor experience than Mont Orgueil Castle, with living-history actors recruiting visitors to join the king’s army, before helping them fire a replica 18th-century cannon toward unsuspecting fishermen in the bay. 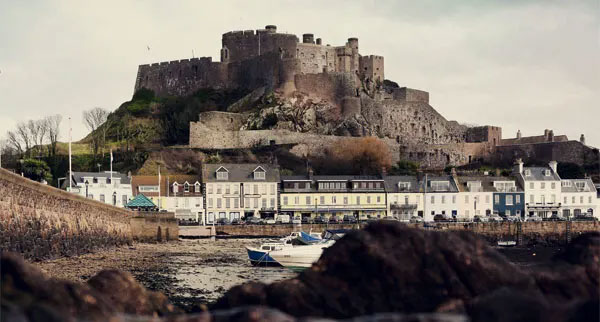 “One of Jersey’s biggest selling points is the outstanding cuisine, which rivals top gourmet spots around the world. The island holds numerous foodie events throughout the year, such as the Eat Jersey Food Festival at The Atlantic Hotel in March and Tennerfest in the autumn, and these are ideal opportunities for customers to experience Jersey’s local produce. Jersey makes a fantastic short break for families and couples, with a host of activities available from boat trips to surfing, heritage sites, and beaches that rival those in the Caribbean. Jersey is less than an hour from mainland UK by plane and clients can travel from their local airport or by ferry, so it’s a very accessible destination.”
Beverley Scarr, short-haul general manager, Premier Holidays. 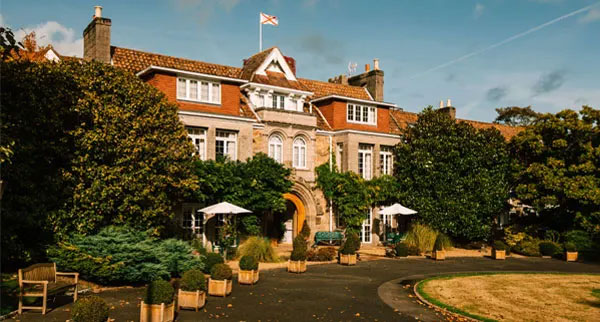 Longueville Manor is the highest-rated hotel in Jersey, and as the only member of the Relais & Châteaux group in the Channel Islands, it’s not hard to see why. The newly refurbished hotel sits just outside St Helier in seven hectares of grounds, which include a heated swimming pool, tennis courts, a lake and woodland walking trails.

The hotel offers just 30 bedrooms and suites, each of which is individually designed with stylish decor. I stayed in the Royal Highness Junior Suite, which featured a cavernous standalone bathtub in front of a large window overlooking the gardens.

“The unexpected jewel in the hotel’s crown is Fizz Too, a luxury yacht available for private charter.”

The hotel also boasts a 4,000-bottle wine cellar, offering tours and tastings, and a state-of-the-art spa and wellness centre. But the unexpected jewel in the hotel’s crown is Fizz Too, a luxury yacht available for private charter.