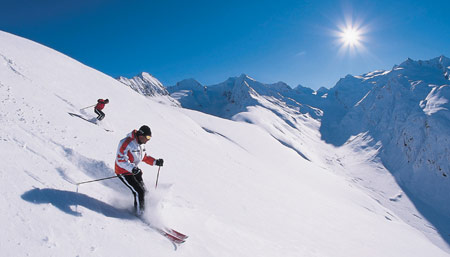 Every skier, expert or novice, yearns to holiday in the world’s top resorts but sadly not everyone can afford to stay in the likes of Aspen, Kitzbühel and Val d’Isere, especially during a recession.

That doesn’t mean they have to ditch their aspirations though. Your clients don’t have to stay in the expensive resorts to ski there because they can often access the same slopes from cheaper places close by.

They might have a bit of a slog to get to and from these ‘backdoor’ resorts every day, but think of it like flying on a low-cost airline – it’s a bit of a faff, but you’ll get there in the end.

As one of the most popular resorts in the French Alps, Val d’Isere is also one of the most expensive but if your clients are lured by the great skiing, rather than the goings on in Dick’s Tea Bar, suggest they stay in Tignes. It doesn’t have the sort of off-piste action you get down the road, but it shares the same Espace Killy ski area.

Sample product:Thomson Ski has seven-night self-catering breaks in Tignes from £355 for adults, based on six sharing. The price includes flights and transfers. There are free and reduced prices for children up to 15. 0871 231 5612, thomsonski.co.uk

Meribel is one of the three biggest resorts, and the second most expensive in France’s impressive Trois Valleys ski area, but there’s no need to fork out a fortune to stay here when there’s cheaper accommodation down the hill.

Savvy skiers enjoy all that the Trois Valleys has to offer during the day and when the lifts are about to close they take a 20-minute gondola ride to the pretty spa town of Brides-les-Bains. It might seem a little inconvenient, but they can save up to 50% on the cost of accommodation alone.

Sample product: First Choice has seven nights’ half-board at the three-star Hotel Amelie from £575 including flights and transfers. 0871 664 0130, firstchoice-ski.co.uk

Chamonix is a mecca to extreme skiers and lots of them are happy to pay the high price of staying in town or in neighbouring Argentiere, but head further along the valley and you’ll come to Vallorcine, a quiet, backwater that offers cheaper accommodation.

The village has access to the Balme ski area, which it shares with Le Tour, but more adventurous skiers can take the train or drive to Chamonix and the challenging runs of Brevent, Flegere and the infamous Grand Montets.

Sample product: Erna Low has a one-bedroom apartment in Vallorcine sleeping four from £502. The price includes a Eurotunnel crossing. 0845 863 052, ernalow.co.uk

No-one would dispute that Verbier is a fantastic all-round resort, boasting awesome terrain – especially for boarders and freeriders – full-on nightlife, top-notch accommodation and gourmet restaurants, but it comes at a high price.

For those with considerably smaller budgets, there’s Nendez. Sharing the same Four Valleys ski area, Nendez offers appreciably cheaper accommodation. It has its own slopes that offer varied skiing and a link to the rest of the Four Valleys via neighbouring Siviez.

Sample product: Crystal Ski offers seven-night, self-catering breaks in Nendez from £329 per adult, including flights and transfers. Prices are based on up to six sharing, with free or reduced prices for children aged two to 15 years. 0871 231 2256, crystalski.co.uk

Kitzbühel is one of Austria’s most famous resorts but its main attraction, in terms of the skiing, is the Hahnenkamm downhill race course, one of the toughest on the World Cup circuit, and you don’t need to actually stay in Kitzbühel to test out the Hahnenkamm, or any of Kitzbühel’s ski runs for that matter.

At the bottom of a gentle blue run lies Kirchberg, a much cheaper place for your clients to stay. From here, there are buses to the Skirast gondola, which links into the lift system. Kirchberg’s low altitude does mean it suffers from unreliable snow, but then so does Kitzbühel.

Sample product: Interhome has a two-room apartment in Kirchberg from where clients can watch the famous Hahnenkamm race. Accommodation-only prices start from £113.25 per person for a week, based on four sharing. 020 8780 6629, interhome.co.uk

When choosing a resort in North America, it’s important to look at the retail price index in addition to the cost of the package holiday as most accommodation is on a room-only basis, so a greater percentage of the overall cost of the holiday is spent in resort.

Big Sky, Montana, is North America’s largest linked resort – and yet hardly anyone in the UK has heard of it. You won’t find it in many ski operators’ brochures, however its RPI is the lowest of all those featured in the skiers’ bible Where to Ski and Snowboard 2010.

Sample product: W&O Travel division Ski Dream has a week at the three-star Summit hotel in Big Sky from £962 per person, including flights and transfers. It’s more expensive than some packages but the hotel claims to be one of the best in the Rockies. 0845 277 3333, wandotravel.com/ski

Both Canadian resorts are cheaper than ski resorts in the Alps, but you can pick up package holidays to Fernie cheaper than to better-known Whistler.

Fernie also has the advantage of smaller lift queues and there’s less likelihood of rain here than in Whistler. Both are good all-round resorts, though Fernie is particularly appealing for the more experienced, adventurous skier.

Sample product: Inghams has pre-Christmas week packages in Fernie starting at £299 per person for seven nights. For the rest of the season, seven-night packages start at £429, including flights and room-only accommodation. 020 8780 4444, inghams.co.uk