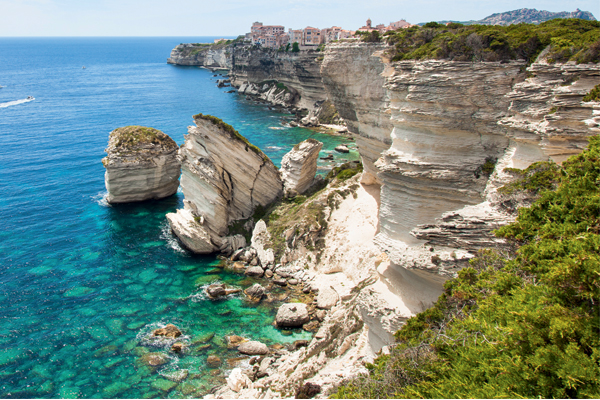 Replete with Mediterranean charm, the French island of Corsica is a force to be reckoned with, finds Richard Mellor.

The French-owned ‘Ile de Beauté’ has beautiful beaches, yes, but also a rugged, activity-friendly interior. Though there are beach resorts and twee tourist trains, so too come family-run guesthouses and ample wild coastline.

Factor in fine food, fascinating history and even the odd golf course, and, ultimately, a clunky cliché becomes wholly unavoidable: there really is something for everyone. 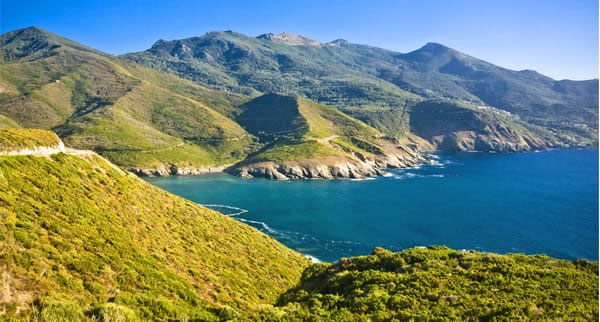 The first decision for visitors concerns geography: to the south, the north, inland or a combination? Air Corsica’s schedule from Stansted to all corners of the island allows for flexibility, while British Airways’ summer services from Heathrow to southern gateway Figari, added last summer, and northern city Bastia, due to start on May 25, help as well.

Either side of Porto-Vecchio and its ritzy, walled citadel, the southeastern coast is the most tourist-oriented, with a host of high-quality hotels beside perfect, white-sand bays. The crowdedness of each beach hinges on the quality of its access road; crescent-shaped Palombaggia is arguably the loveliest, but no secret. Though with building regulations happily precluding overdevelopment, no shore is ever horribly overrun.

“The northeast’s spindly Cap Corse peninsula, all fishing villages and windmills, is “the island’s most unspoilt region”.

At the tip of ‘L’Extrême Sud’ awaits Bonifacio, its ramparted old town set precariously atop limestone cliffs. Below, tourist boats chug off from its busy, fjord-side port towards grottoes and the beaches of the Lavezzi Islands.

Corsica’s southwestern seaboard is slightly emptier all the way up to capital Ajaccio – Napoleon’s birthplace and home to a lazy, French Riviera vibe – but it has some sensational coves. Slightly inland, hill town Sartene pairs a pirate-dotted history with ultra-narrow shopping lanes.

In the north, two attractive resorts in L’Ile Rousse and the larger yacht-dotted Calvi, which boasts an airport, are linked by a scenic narrow-gauge railway. In between lie the quiet beaches of the fertile La Balagne region, perfumed by the omnipresent maquis shrub. To the west are spiky red sea cliffs called the Calanches, while the northeast’s spindly Cap Corse peninsula, all fishing villages and windmills, is “the island’s most unspoilt region,” according to Just Corsica product manager Rob Ashton-Kane.

The island’s cuisine is hearty and rustic, with charcuterie and ricotta-like cheese popular in the interior, and ample fresh fish nearer to the sea. Few Corsican wines get exported, so oenophiles have the chance to unearth some rare, and very good, tipples. 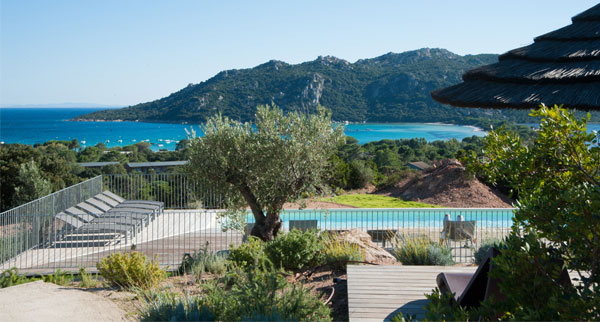 Villas, apartments, guesthouses, resort hotels; Corsica has all bases thoroughly covered. Prices mostly range from mid to high-end, and while eating out can be done affordably, the island shouldn’t be sold as a budget destination.

Its self-catering scene is especially strong near Calvi and L’Ile Rousse, and in or near Porto-Vecchio, with a good supply of supermarkets, high standards of upkeep and professional staff. Pools and ample parking come virtually as standard.

Just Corsica recommends Résidence Santa Giulia Palace, five miles from Porto-Vecchio’s shops and restaurants and 15 from beautiful Bonifacio. It offers a choice of studio apartments and suites sleeping two to six people, while beachside proximity and the use of shared pools and gardens suit couples and families.

“Prices mostly range from mid to high-end, and while eating out can be done affordably, the island shouldn’t be sold as a budget destination.”

The same stretch of coast also excels at beach hotels: Le Pinarello, neighbour to pizzerias and palm trees in the leafy, cove-side village of Pinarello, is especially lovely. The poshest, priciest locations are Santa Giulia or, on the Lavezzi island of Cavallo, the exclusive Hôtel & Spa des Pêcheurs.

Bonifacio makes for a memorable base, but it’s better to visit there than stay given the constant footfall and limited vehicular access. Along the less developed southwestern coast, beachside hotels include the secretive and celebrity-loved Domaine de Murtoli, along with more affordable spots. Towards Ajaccio sit plenty of villas and some bigger chain resorts.

“Head further inland and the villas are secluded and an easy base for walking holidays away from the coastal crowds.”

The north is most reliable for villas, offering convenience for families flying into Calvi or Bastia. Hôtel La Villa has three luxurious homes in the hills above Calvi, and guests can use the swanky hotel’s pools, spa, restaurant and bar.

Head further inland and the villas are secluded and an easy base for walking holidays away from the coastal crowds, or for exploration of wilder regions such as Cap Corse. 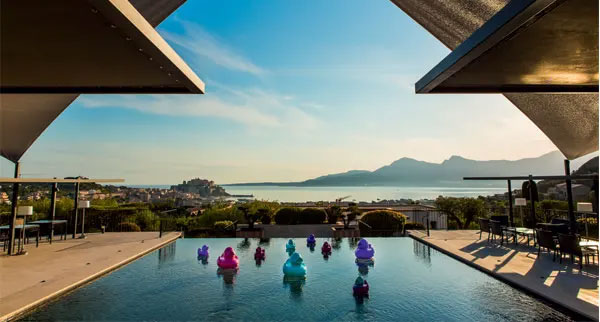 Corsica’s roads are well maintained and, away from the winding roads of the interior, fairly direct. Traffic can be a problem, with few towns properly bypassed, but the island’s relatively small length still renders two-centre trips easy.

Even if customers are based in one place, suggest they hire a car. Public transport is unreliable and infrequent, distances are too great to walk and towns too small to keep visitors occupied for a full week. Anyone planning to visit farther-flung beaches should request a 4WD to cope given the often-potholed roads.

Families usually favour coastal regions near beaches, especially as lots of bays have shallow, crystal-clear waters, ideal for smaller children and snorkelling. Calvi, the southeast and the southwest work best, in large part thanks to the flexibility and privacy offered by the self-catering options.

“Guides to the island’s history are also available, and add some real colour to the likes of Sartene and Bonifacio.”

Coastal and rural boutique hotels work well for couples, and there is lots of choice. Options range from converted farmhouses turned chichi auberges to bijou boltholes by the sea.

Just Corsica provides self-guided walking holidays, with route guides, maps and luggage transfers, or will arrange guides for a day’s walking. Ditto for the island’s endless water sports – catamaran sailing, windsurfing, kayaking, jet-skiing – or inland activities. Guides to the island’s history are also available, and add some real colour to the likes of Sartene and Bonifacio.

Much of this requires advance booking, with the exception of boat trips from Bonifacio or Porto-Vecchio to the Lavezzi Islands, and guided sailings departing Porto for the west coast Scandola National Park, which can normally be booked on the day.

Tu ne parles pas français? Customers shouldn’t worry, says Ashton-Kane, who has lived in L’Ile Rousse for a decade. “The Corsicans love the British. There are historic links with Nelson and English is quite widely spoken – restaurant, bar and shop staff love to practise!”

“With Corsica a relatively niche holiday destination, rather than mass-market, space is forever at a premium.”

While one or two-week breaks are the norm, short breaks are increasingly possible thanks to UK flight links. Air Corsica flies from Stansted to Bastia, Ajaccio and Figari at least twice a week (May to October), with Thursday-Sunday routings available to all three airports. Calvi flights are weekly, as are British Airways’ services to Bastia and Figari (on Saturdays and Sundays respectively, May to October).

When should visitors go? “Our most popular months are June and September,” says Ashton-Kane. “The weather’s good, everywhere’s open and it’s less crowded than during the French and Italian summer holidays.”

Above all, he recommends booking months in advance. With Corsica a relatively niche holiday destination, rather than mass-market, space is forever at a premium. 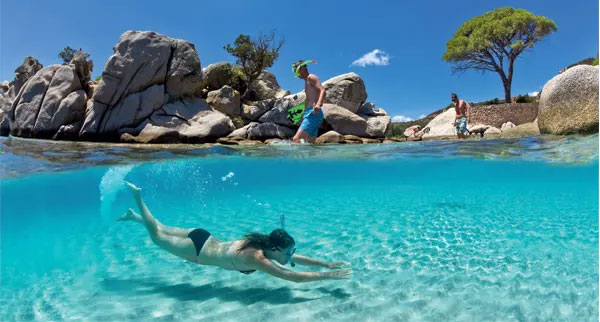 Just Corsica offers seven nights’ B&B at Hotel Santa Maria, just outside L’Ile Rousse with a private beach and pool, from £687 per person. The price includes flights from London to Calvi and transfers.

A twin-centre combining Hotel Solenzara and Hotel La Roya on Cap Corse starts at £1,665 per person for 14 nights’ B&B, including flights to Figari returning from Bastia, and car hire.