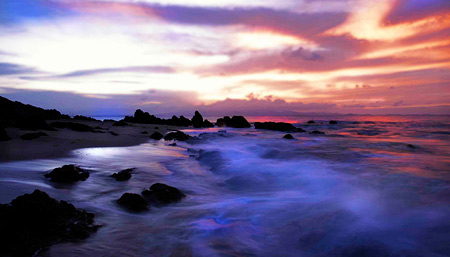 The historic centre of San Juan is a beautifully preserved Spanish Colonial city – like a less crumbling Havana – and strolling down its cobbled streets is a must for any visitor.

It is filled with museums, and the main plaza is home to two of the most striking buildings, but tell clients to also head out to El Morro, a walled 16th century fortress on the bay, where soldiers fought off attacks by the English and Dutch armies.

San Juan also offers trendy restaurants and bars, chic hotels, modern art and haute couture shopping, plus many US brands such as JC Penny and Macy’s.

Latino music lovers are pampered in Puerto Rico, where salsa, and the traditional bomba, plena and seis genres can be heard in bars and clubs, accompanied by dancers. The nightlife in San Juan is lively, with rum-fuelled salsa and merengue clubs, casinos, theatre and a wide range of restaurants offering Creole delicacies and international cuisine.

In the southwest, Ponce is Puerto Rico’s second largest city, with lavish 19th century architecture dating from an era when it was a centre of commerce.

For night swimming with a difference, head for one of Puerto Rico’s ‘bioluminescent bays’, which are lit up by marine plankton. Two of the best locations are Mosquito Bay on Vieques Island and Laguna Grande at Las Croabas, Fajardo.

Puerto Rico offers outstanding scuba and snorkelling. Recommend Cayo Diablo off the east coast for moray eels, octopus and manatee. Off the southwest coast the Black Wall is home to rarely seen black coral, and Hai Lite is where jewfish, trumpetfish and giant tube sponges can be found.

Mona Island is known as the Galapagos of Puerto Rico, home to 3ft iguanas, turtles, dolphins and marlin. Snorkellers will love Gilligan’s Island, where the shallow waters and mangrove-lined channels offer clear vistas.

The underground system of Rio Camuy Cave Park has an underground river running through it. Trams travel into the 170ft-high Cueva Clara and up to a platform overlooking the 400ft-deep Tres Pueblos Sinkhole.

Hiking in the El Yunque rainforest takes visitors along sunlit paths, past cascading waterfalls, lush plant life and indigenous animal species. There is a dry forest too, Guanica, which has 12 well-marked walking and biking trails ranging from easy to rugged.

For those lacking time, Pinones Forest is just 20 minutes from San Juan. A boardwalk takes visitors through a mangrove and pine forest to a small bioluminescent bay.

Puerto Rico is already well served for hotels, with international chains and smaller, locally-run paradores. However, there are exciting new developments on the horizon, including the W Retreat and Spa, which will be taking reservations from May 1 next year.

Located on secluded Vieques Island, off the east coast of the mainland, the hotel will offer 157 rooms and suites decorated with signature W panache, four restaurants, a spa and fitness centre, a car-rental service and activities including fishing, scuba diving and snorkelling, horseback riding, beach volleyball and kayaking.

Just opened is the 525-room Sheraton Puerto Rico Convention Center Hotel and Casino, which sits on the bay of San Juan.

The benefits for business guests are obvious, but this is also a viable option for leisure travellers, as it is situated only five minutes from downtown Old San
Juan, and it has a casino, infinity pool and a 57,000sq ft outdoor sundeck.

Hola Caribe offers seven nights in the Courtyard by Marriott Isla Verde, on the beach in San Juan, from £1,089 per person including Iberia flights
holacaribe.co.uk, 0844 811 1068