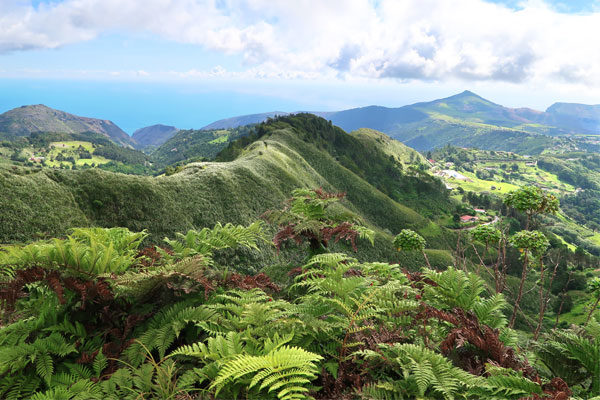 The advent of flights to St Helena has opened up this remote British jewel in the South Atlantic, reports Mike Walsh.

Napoleon might have been less misérable about meeting his Waterloo had he known he was to be exiled to the enchanting island of St Helena.

The French emperor’s historic links still loom large on this ruggedly beautiful and remote British Overseas Territory in the South Atlantic, though he now has to vie for tourists’ attention with a 186-year-old tortoise, dolphins and whales, and a captivating old-world charm and civility.

St Helena is a British destination with a subtropical twist. Just 47 square miles in area, it lies 1,200 miles off the coast of West Africa and 15 degrees south of the Equator, and is home to 4,500 St Helenians, or Saints as they call themselves.

“Until two years ago St Helena was accessible only by sea on a five-day sailing from Cape Town.”

Until two years ago, it was accessible only by sea, either by cruise ship or by cargo vessel on a five-day sailing from Cape Town. Now, its first airport has brought the island to within five hours by air of Johannesburg, from where South African carrier Airlink operates a weekly year-round service on Saturdays, and a second weekly peak season service on Tuesdays between December and April.

Travellers for whom ‘hard to get to’ is a destination badge of honour need not fret, however. Getting to St Helena, even by air, is still a real adventure. Atlantic winds that shear across the rock-edged runway forced 14 of Airlink’s flights to be delayed by at least a day in its first year of operation on the route. Not for nothing are details of day trips to Mandela House and Soweto given to St Helena-bound passengers overnighting in Johannesburg.

And with seats for only 152 passengers a week even in peak season, there is no danger of St Helena’s heritage-laden charm being diluted by mass tourism. 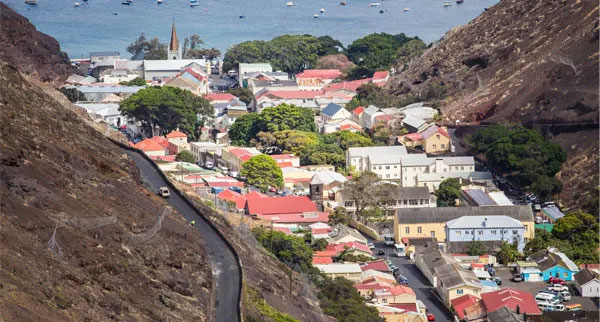 Jamestown (pictured) is the island’s capital and focal point. Little more than a single street bordered by some fine Georgian buildings, it lines a valley flanked by imposing rock, running down to a beach-less harbour affectionately known as ‘the Seaside’, where Atlantic waves crash and spray.

History is all around. Discovered by the Portuguese in 1502, the island was first settled by the English in 1659 and developed by the East India Company, before being taken over by the British crown in 1834.

“A good way to learn about the place is on a historical walking tour with father-and-son team Basil and Kevin George of Magma Way.”

Jamestown tells that story, with its fortified wall, castle and prison, the southern hemisphere’s oldest Anglican church, and the vertigo-inducing 699-step Jacob’s Ladder that ascends to further strongholds at Ladder Hill Fort.

Listen carefully and you can almost hear the famous voices of bygone times. Napoleon walked this way, as did the Duke of Wellington, Edmond Halley, Charles Darwin, Captain James Cook and Captain Bligh. A good way to learn about the place is on a historical walking tour with father-and-son team Basil and Kevin George of Magma Way (two hours, from £10). 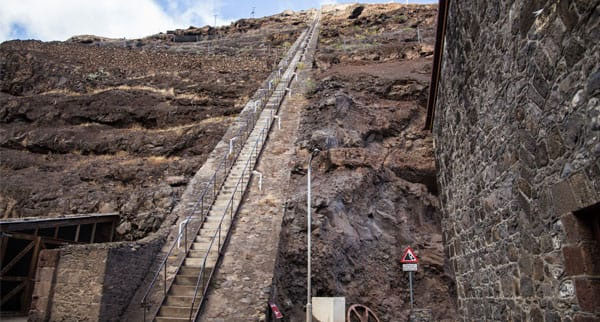 Beyond the history, there’s something else in Jamestown: a tangible feeling of community and courtesy. Long-ago days of conflict have given way to conviviality, with St Helenians sincerely greeting locals and visitors alike.

You might have to listen carefully, though. If a St Helenian asks you ‘who you is?’, don’t be perturbed. It’s the local way of saying ‘who are you?’. St Helenians’ unique English dialect includes a tendency to shorten words and speak quickly, so if they offer you some ‘breead’ (bread), it ‘mussie’ (must be) because they’re being hospitable.

“There are no chic boutiques or spas in Jamestown, and aside from a couple of craft stores, the shops here are for locals.”

Tourism is still relatively new and small-scale. There are no chic boutiques or spas in Jamestown, and aside from a couple of craft stores, the shops here are for locals, lending the town an authenticity lacking in more‑developed destinations.

Whether Napoleon appreciated that authenticity can only be imagined. He was deported to St Helena in 1815, accompanied by a French entourage of about 20. The British so feared his escape that they stationed 2,500 soldiers on the island.

Napoleon resided at Briars Pavilion and Longwood House, until he died in 1821 and was buried in the Valley of the Tomb. Together, these form a trio of sites, administered by France, that can be visited for £15. 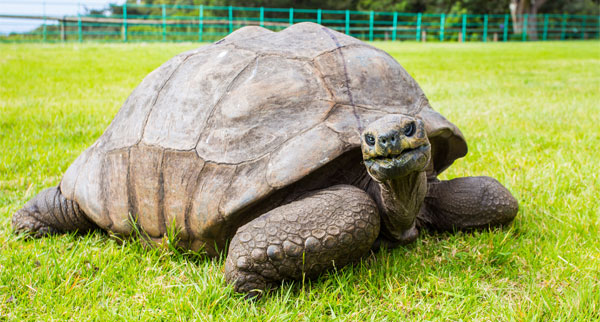 Today, the island’s most-famous resident is Jonathan (pictured), a giant tortoise born just 11 years after the Frenchman’s death and believed to be the world’s oldest living land animal. He whiles away the decades chomping on the carefully manicured grass at Plantation House and being amorous with a fellow tortoise who was long called Frederica but whose name was subsequently, and surprisingly, corrected to Frederic.

Talking of names, St Helenians are big on nicknames. Why some of the locals are called Big Cakes, Teapot, Nozzle and Small Change is not altogether clear, but one Saint whose feet are noticeably splayed is known as Ten to Two.

St Helena’s landscapes range from volcanic rock to lush vegetation. The island is home to a host of endemic flora, including the white-flowered St Helena ebony and the green-leafed gumwood, while birdwatchers thrill at spotting the wirebird.

“The island’s most-famous resident is Jonathan, a giant tortoise believed to be the world’s oldest living land animal.”

A popular way to take in the scenery is by hiking to Diana’s Peak, the highest point on the island, or walking one or more of the 21 post box walks – at the end of each is a post box containing an ink stamp. Guided walks are the best way to learn about the island’s unique ecology.

St Helena is also a magnet for scuba divers and snorkellers. The warm waters around the island teem with colourful marine life including butterflyfish, scorpionfish, sea slugs and anemones. But the biggest draw are the whale sharks, the world’s largest species of fish at up to 12 metres in length, which can be spotted between January and March. There are two Padi-accredited diving operators.

After these and other exertions, visitors can quench their thirst with a trip to the remotest distillery in the world, in a garage in Alarm Forest. A £5 tour offers a tasting of all five products, including Tungi, a spirit made from the flower of the island’s cacti; a spiced rum (pictured); and a coffee liqueur made from local arabica beans. 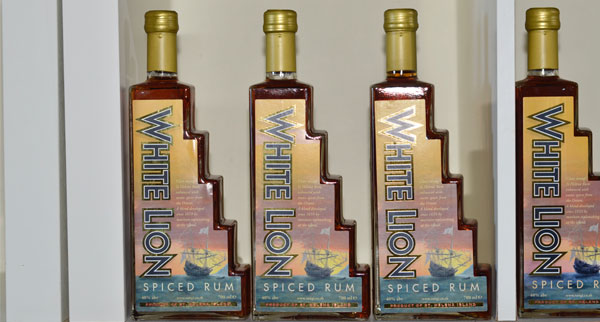 Jamestown’s plushest hotel is the Mantis St Helena (pictured, below), a 30-room property in a 1770s building that once housed the East India Company’s officers’ barracks. Recently renovated, it offers luxurious Heritage Rooms and newly built Contemporary Rooms, plus a restaurant, bar, outdoor terrace and Wi-Fi.

General manager Matt Joshua says: “Jamestown is like a village in Cornwall that has been transported to the tropics. British guests feel really at home here.”

The nearby colonial-style Consulate Hotel features a wrought-iron balcony frontage, while the Blue Lantern Hotel is a more mid-range property popular with divers. Other options in Jamestown include a couple of guesthouses, while elsewhere on the island is the acclaimed Farm Lodge Country House Hotel at Rosemary Plain.

“Fish is a key ingredient, with tuna and wahoo melded with potato and chilli to make the island’s signature fishcakes.”

St Helena’s cuisine bears witness to its mix of settlers through the ages. Fish, naturally, is a key ingredient, with tuna and wahoo melded with potato and chilli to make the island’s signature fishcakes. For a real taste of local life, visitors can make their own at the home of Derek and Linda, a hospitable couple who run Cooking with Saints (£20 per person including dinner and drinks for groups of five or more).

For those who prefer eating to cooking, restaurants include Anne’s Place, Rosie’s Place and the Orange Tree Oriental, or for a more youthful vibe, try fish fry at the Wicked Wahoo dive bar in Rupert’s Bay. 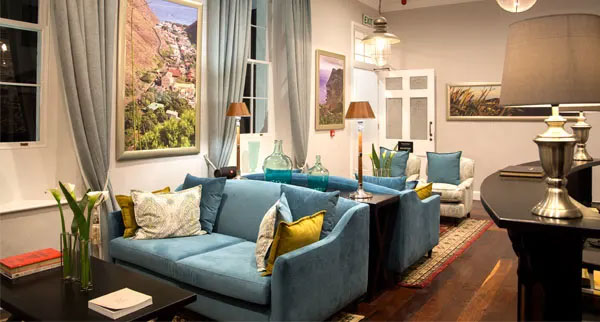 St Helena remains an emerging destination, featured by only a handful of UK tour operators. Destination specialist Island Holidays has offered St Helena since 2005 and works with agents on an individual basis to build commission into flight-inclusive packages, which range from fully guided tours to tailor-made, independent holidays. A guided 13-night trip departing Heathrow on October 24, combining an island tour with time in Johannesburg and Cape Town, starts at £6,185, including flights and sightseeing.

Explore has one guaranteed departure this year on a Remote St Helena guided tour, starting at £4,260 for 10 days from November 21, including flights.

For a tailor-made alternative, Rainbow Tours can arrange private guided itineraries around the island, with a nine‑night trip starting at about £3,725, including all flights and accommodation at the Mantis St Helena. 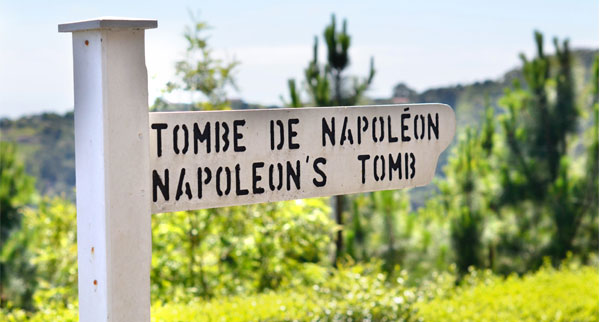 Diving specialist Dive Worldwide also features the island, offering group and independent options. St Helena in Style is a small-group diving trip led by marine conservationist Danny Copeland, sandwiching boat dives, snorkelling with whale sharks and sightseeing on the island, between days in Johannesburg (from £4,195 for 12 days, including all flights). Tailor-made trips are also available, starting at £3,095 for 12 days including 10 dives and sightseeing time at leisure.

There are several destination management companies in St Helena, all featured on the tourist board’s website.
sthelenatourism.com

“St Helena has tremendous potential because it has so many things to offer. The history is incredibly rich, with famous visitors having included Napoleon, Cook, Halley and Darwin. The sheer beauty of the island will appeal to trekkers and nature enthusiasts, with the landscape changing dramatically from the coast up to Diana’s Peak. And that extends into the water, with snorkellers and divers able to see whale sharks, humpback whales, dolphins and wrecks. The airfare from Johannesburg will put some people off – it is quite expensive – but the remoteness of the island will appeal to many. But more than anything, it’s the people that really make St Helena such an enchanting place to visit.”