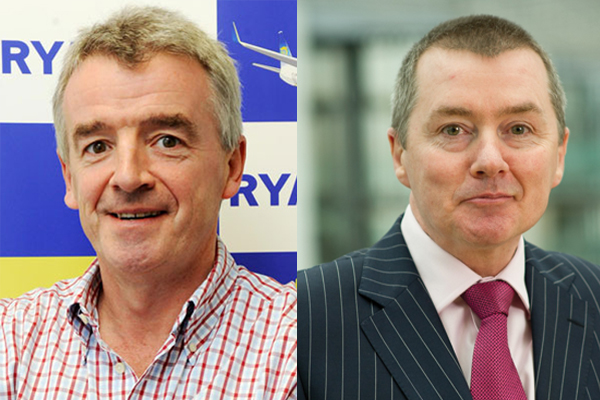 O’Leary went so far as to name Norwegian Air as at risk, saying: “Norwegian will be the first when it runs out of $350 million come October or November. They may not fail then, but in 2019 or 2020.”

Norwegian aims to raise $350 million by diluting its shares through a rights’ issue this month.

O’Leary said: “There are people out there operating weaker models.

“The industry is moving inexorably towards five airline groups controlling 80% of traffic in Europe – IAG, Lufthansa, Air France-KLM, Ryanair and easyJet – and that will be good. We all have plans to grow.”

Walsh said: “There are airlines in a very weak position and they will struggle to maintain their capacity.”

EasyJet chief executive Johan Lundgren agreed, saying: “There are a number of inefficient models out there. When the fuel price goes up, they will be in trouble.”

Lufthansa Group chief executive Carsten Spohr said: “To lose as many airlines as in the last months shows there is an unhealthy element in Europe’s airlines.”

He argued EU rules on air passenger compensation are partly to blame for the failures, which include Germania in Germany, Flybmi in the UK, Cobalt Air of Cyprus, Primera Air of Denmark and Small Planet Airlines of Lithuania.

Spohr said: “[EU] Regulation 261 [on air passenger compensation] has done this. If you are a smaller airline, the costs [of delay compensation] are large.”

Speaking outside the summit, O’Leary described Norwegian’s low-cost long-haul business model as “one that is going to fail, particularly with high oil prices”.

He said: “The more they grow on long haul, the more money they lose. They keep trying to generate cash. They keep growing and they keep losing money.

“It is a business model that is going to fail.”

O’Leary also suggested Norwegian is losing pilots to Ryanair. He said: “We’ve had applications from more than 200 Norwegian pilots.”