The phrase ‘he’s more scared of you than you are of him’ doesn’t seem to mean much, as a dominant lion strides confidently towards the jeep. With this powerful predator no more than a metre away, there is absolute silence as our group of experienced agents sits in awe of the creature ahead.

It’s that sort of tense moment that makes a safari stand out from other holidays, and makes each visit to the bush unique. Whether it’s a close encounter with a lion, leopard or cheetah, or feeling the vibrations as a herd of elephants dashes across the rough terrain, you never know which animal is around the corner.

That’s why South Africa is a safe bet for repeat visits, with plenty to persuade clients to return time after time. If they’ve ticked off Cape Town and the Garden Route, look to Limpopo, Mpumalanga and the enormous animal kingdom of Kruger National Park – the subject of our South African Tourism fam trip – to whet the appetite to go back. 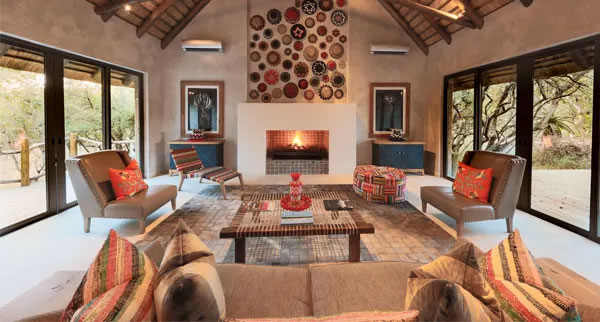 Service stations aren’t usually a selling point, but the Alzu Petroport on the N4 motorway from Johannesburg to Limpopo is a real scene-setter. Just past the usual coffee shops and fast food outlets, you’ll see buffalo, zebra, rhino, impala and ostriches grazing at the watering hole nearby.

But it’s not until you get to a game reserve that you see the animals in full glory. Arriving at dusk at Kapama, between Blyde River Valley and Kruger National Park, there are gasps as our group – cameras at the ready – shout ‘giraffe’ and ‘zebra’ as we negotiate the off-road drive to the lodge.

Kapama is not camping, or even glamping, but rather sympathetically designed huts attracting honeymooners and even Premier League footballers during our stay. After a traditional South African boma – tables set around a roaring fireplace, with kudu steak and bobotie on the menu – and an early night, we were ready to set off on our first early-morning game drive.

“It’s important to follow the dung,” says head ranger Francois van Rhyn, as we track a white rhino. “The fresher the better. It means you know they are close by.” Minutes later, we turn the corner to find a big male rhino with a stunning horn.

He points to the battered branches of leafless trees as signs of elephants passing through, and spots ‘go away birds’ that sound like they’re telling you to get lost, yellow-billed hornbills (think Zazu from The Lion King), giraffes, impala and a pregnant hyena, which van Rhyn says is the closest he’s got to the scavenger in daylight. 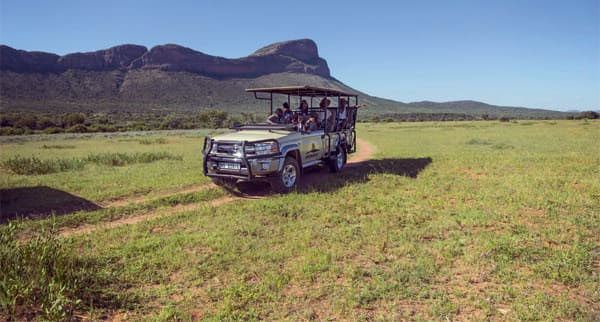 There are lodges all over Limpopo, and next up was Sefapane Lodge in the Phalaborwa district, the gateway to Kruger. The pre-breakfast bush walk required another early start, but the 4.45am wake-up call is worth it to witness herds of buffalo at sunrise.

Remember to wrap up warm and dress in dark green, tan or grey to make yourself less visible to the animals. Rifle-armed rangers lead the walk as the group follows in single file, getting closer to nature than is possible on a 4×4. Guides pause to explain the finer details – why the leaves of the Mopane tree are shaped like butterflies, how people used to live off the land, and tribal burial rituals around termite hills – and our ranger even sings to the birds to encourage them out of their tree. We follow leopard footprints and, despite not finding the elusive big cat on foot, get close to baboons, elephants, zebra and impala – all before breakfast.

“Rifle-armed rangers lead the walk as the group follows in single file, getting closer to nature than is possible on a 4×4.”

Sefapane also offers boat trips along the Olifants River, a laid-back experience that allows a better view of elephants in their natural habitat, and of a leopard basking atop a rock in the sun.

There are some hefty drives involved in seeing everything Limpopo has to offer, but the views are jaw-dropping, with interesting pitstops along the way. Break the journey with a visit to what’s said to be the largest boab tree in the world – more than 2,000 years old, according to local legend – and for a 5p donation, you can climb up or have a nosy inside its trunk. It’s a good chance to stretch your legs before settling in for the winding roads of the Magoebaskloof Pass, which offer stunning views en route to Tzaneen. 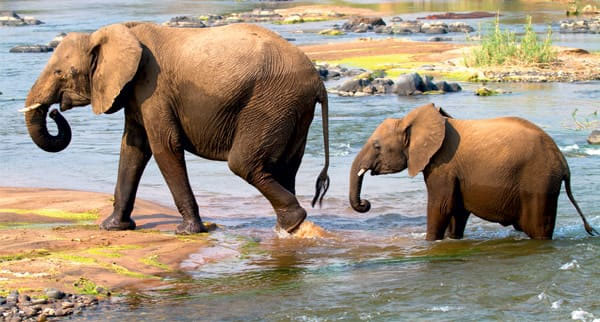 You might think being in the company of lions was enough of a rush for one trip, but adrenaline junkies who want more can strap in for a scary, though stunning, zipline ride with Canopy Tours in Magoebaskloof (two and a half hours, £33). The network of 11 ziplines – between 10m and 150m long, or one and a half miles in total – straddles waterfalls, cliff edges and a river that flows in two directions.

For a gentler option, head to Pilgrim’s Rest, which wouldn’t look out of place in the American Wild West. The gold mining town, founded by Alec ‘Wheelbarrow’ Paterson, feels like a journey back in time, with wooden-fronted shops, ‘general dealer’ stores, and the chance to try gold panning. It involves getting your feet wet, but when the sand swirls away to reveal a shiny nugget of gold, it’s worth the wait.

“Adrenaline junkies who want more can strap in for a scary, though stunning, zipline ride.”

Taking refuge at The Royal Hotel adds to the experience. It dates back more than 140 years and has the decor to match with standalone bathtubs (no showers) and candles in the rooms “in case of a power cut”. Only 80 people live in Pilgrim’s Rest, so book ahead as this town genuinely isn’t big enough for too many visitors.

When they’re ready to move on, the jaw-dropping scenery of the Panorama Route awaits. There’s the aptly named God’s Window, a perfect selfie spot at 1,500m above sea level; Bourke’s Luck Potholes, a natural rock formation with stunning views, at the meeting point of the Treur and Blyde rivers; and the jaw-dropping Lisbon Falls, where four waterfalls – the highest a whopping 95m – flow into one churning pool.

While Mpumalanga is a gateway to Kruger National Park, there are enough alternative activities to keep customers entertained. Quad biking anyone? Induna Adventures has a fleet of Grizzly 350s which can be taken out around its dirt track to spot warthogs and even crocodiles among a forest of macadamia trees (from £13 for an hour). 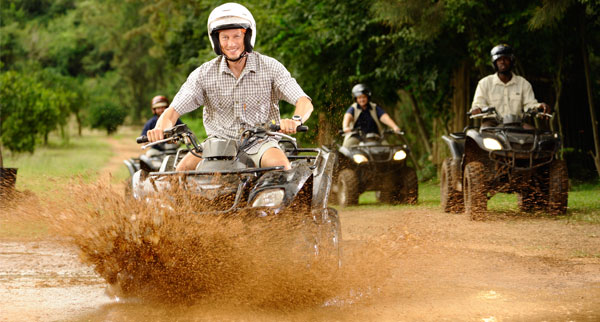 The real wildlife-spotting is yet to come, though, as we cross over Crocodile Bridge into Kruger National Park. Before we even check into our lodge, the group has spotted impala, wildebeest, warthogs, buffalo, rhinos, zebra, giraffes, kudu, springbok, water buck, vultures, Egyptian geese and the endangered ground hornbill, of which only 23 are known to exist in the park.

Luxury lodge Shishangeni feels at one with the nature that surrounds it. Service is splendid, with little touches like outdoor showers under the stars, a bedtime story to read, and a fire by the bath. Any special requests? Staff will ensure they’re on the next delivery.

“As the lions approach our vehicle, a stunned silence takes over and you can feel the tension in the air.”

Shishangeni doesn’t disappoint with its wildlife, either. Ranger Herold Ndhlovu asks us what we’d like to see. “Lions,” comes the unequivocal response. A brief pause, and he calmly says: “Not a problem.” We set off in our private jeep and within 25 minutes we’re tracking three dominant males. As they approach the vehicle, a stunned silence takes over and you can feel the tension in the air. “Don’t worry, they’ve had their breakfast,” says Herold.

A day of incredible moments follows, with the awkward sight of a giraffe bending its giant legs to drink from a watering hole, a zebra crossing the dirt track, and a tawny eagle flying ahead as if we’re following in hot pursuit. Then we come across something Herold has never seen in his time – two leopards, his favourite animal, mating.

South Africa’s ability to provide new experiences, even for its experienced rangers, shows why it’s the sort of destination you can send customers time and again. 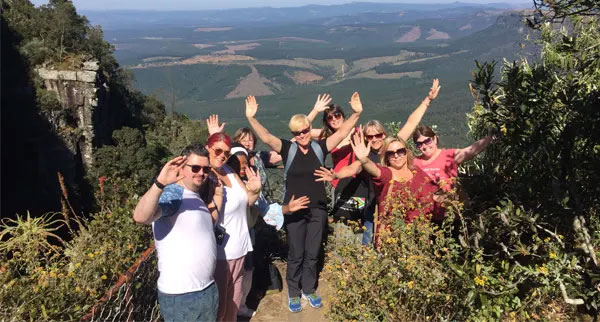 “Kapama Private Game Reserve’s Southern Camp is ideal for honeymooners or those looking for five-star luxury, while Sefapane River Lodge was a completely different experience with a bit more traffic, and was close to the Olifants River which allowed great game viewing without effort.”
Michelle Stammers, The Travel Genius, Sutton Coldfield

“At Shishangeni we had amazing views of all the animals, the rangers were fantastic and drinks under the stars were a real treat. Quad biking at Induna Adventures is a must, whether you’re a pro or an amateur – it’s so much fun riding on a trail past watering holes.”
Samantha Briggs, Avista Travel, Clitheroe

South African Tourism has a trade site with tips on selling South Africa and links to its SA Specialist agent training site.
southafrica.net/gl/en/trade