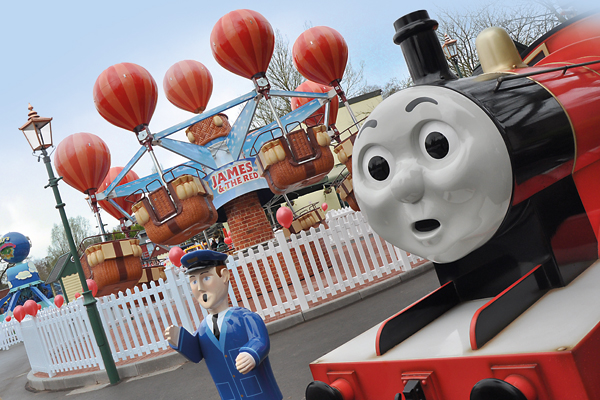 “I’m driving the train Mummy!” Happily for everyone in the vicinity, my son Dexter is mistaken. We’re really just sitting in the front seat of Skarloey, the red engine, and pretending to steer as this gentle roundabout ride revolves. But in this two-year-old’s delighted imagination, he’s a train driver.

Blue Mountain Engines was the first ride we tried at Thomas Land, the 6,000sq m park dedicated to a certain blue tank engine. Sitting at the heart of Staffordshire theme park Drayton Manor, it’s a dream come true for young fans, with rides, play areas and live shows dedicated to Thomas and his many friends.

We should really have started at Winston’s Whistlestop Tours – this slow circuit on a track raised above the park is a great opportunity to earmark the rides you want to try, and to get a sense of the layout.

Many of the rides are branded versions of old favourites. Dexter loved spinning around on Diesel’s Locomotive Mayhem, a take on a teacup ride, and the rather pedestrian but charming Lady’s Carousel. For a bit more of a thrill, there’s Rocky Bulstrode, a version of the classic swinging pirate ship.

You’ll find planes and automobiles here as well as trains, not to mention fire engines and boats, too. As Thomas fans will know, storylines include a range of vehicle characters. 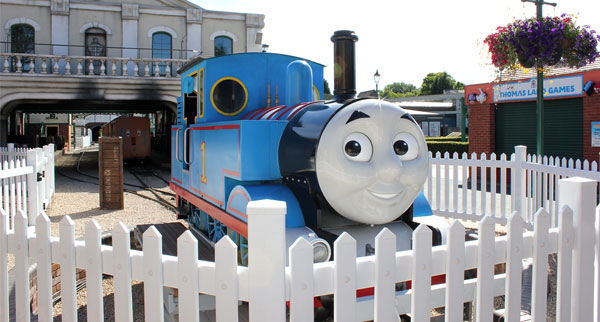 At the park, Jeremy Jet and Harold Helicopter rides take little ones gently into the air, and there’s the long, winding track of Sodor Classic Cars. This was another favourite with Dexter, where he felt even more like a real-life driver while turning the wheel of a Model T Ford-style vintage car.

“Jeremy Jet and Harold Helicopter rides take little ones gently into the air, and there’s the long, winding track of Sodor Classic Cars.”

At just two, my son was at the younger end of the age spectrum for the park, and too short for some of the more thrilling rides, including Cranky’s Tower Drop and the Troublesome Trucks Runaway Rollercoaster. These were also the rides with the longest queues, and considering a toddler’s attention span it was actually a bit of a relief to take them out of the equation. 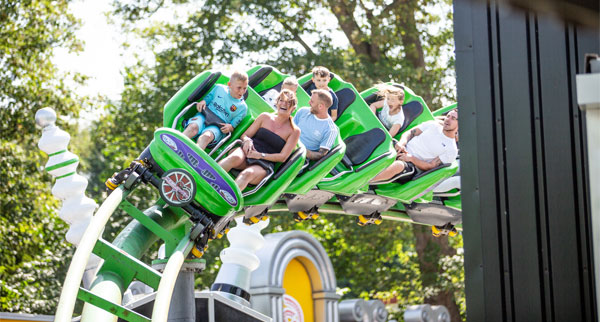 Up in the air

Happily, the queue wasn’t too long at James & the Red Balloon, one of the park’s newest rides, where Dexter loved spinning up in the air in the baskets. After multiple goes, the only way to persuade him to move on was the promise of a live show, where he would get to see the ‘real’ Fat Controller.

We watched the singing and dancing, and then waited for the next engine tour, climbing into a carriage behind Thomas himself to be chugged slowly across the park to Tidmouth Hault station.

“We whiled away an hour on the climbing frames, slides, tunnels and bridges of the rail-themed Spencer’s Outdoor Adventure Play.”

For the littlest legs, this is a fantastic way of linking up Thomas Land with the other toddler-friendly elements at Drayton Manor. Thomas, Percy and Emily make appearances on this route, though not every engine seems to run every day, so it’s best not to make promises if a child has a favourite.

At the other end of the line we whiled away an hour on the climbing frames, slides, tunnels and bridges of the rail-themed Spencer’s Outdoor Adventure Play, and – to my dinosaur-obsessed son’s delight – also discovered the park’s Dino Trail. 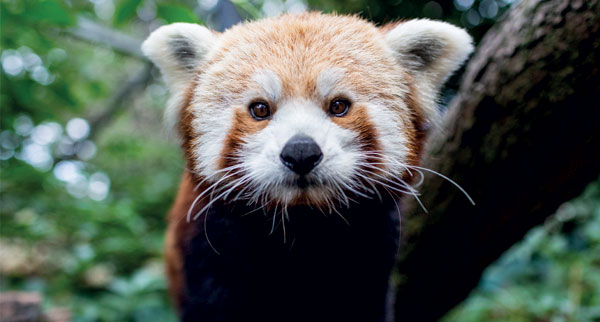 This station is also near Drayton Manor Zoo. With more than 100 animals, it’s brilliant for kids, and provides a quieter environment when you need to calm down after Thomas Land’s thrill. There’s a handsome, imposing Sumatran tiger, playful tamarins, gibbons, lemurs and macaques, cute red pandas, and crowd-pleasing meerkats.

Rain is always an unwelcome visitor at a theme park, but there are a couple of options to duck into to wait out a shower. In the main Thomas Land park, Emily’s Adventure Play is a soft play area with slides and a ball pit, and at Tidmouth Hault, you’ll find the Discover Thomas & Friends Exhibition. Die-hard Thomas fans young and old will love this miniature railway featuring original models from the first TV series.

“Drayton Manor Zoo has more than 100 animals, it’s brilliant for kids and provides a quieter environment.”

With no rain to stop play on the day we visited, we rode back – behind Percy this time – to Knapford Station for one last go on James & the Red Balloon before waving goodbye to Thomas Land. If Dexter has anything to do with it, we’ll be choo-choo-choosing to visit again soon. 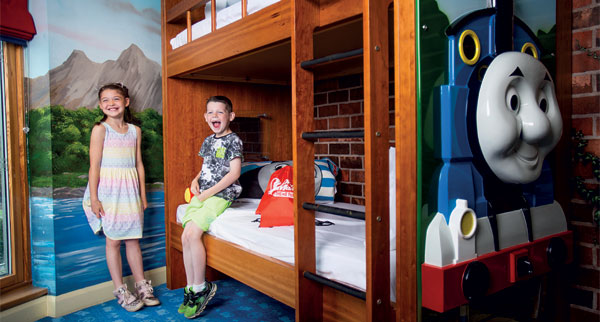 Just outside the gates of the park, Drayton Manor Hotel is not only the most convenient place to stay before or after your Thomas Land adventure – it also allows you to keep the magic alive that little bit longer.

Dexter was enchanted by the Thomas diorama at the entrance, and ran over to hug the plastic passengers standing around the lobby. There are branded elements all over the hotel – right down to themed rooms with bunk beds. Our Family Room had a sofa bed and blackout curtains – although even those couldn’t stop Dexter waking early in anticipation of the character breakfast we’d booked, where he got to meet the Fat Controller.

Book it: A night in a Family Room including one-day entrance tickets to the park for a family of four starts from £224 with Super Break.
superbreak.com/agents 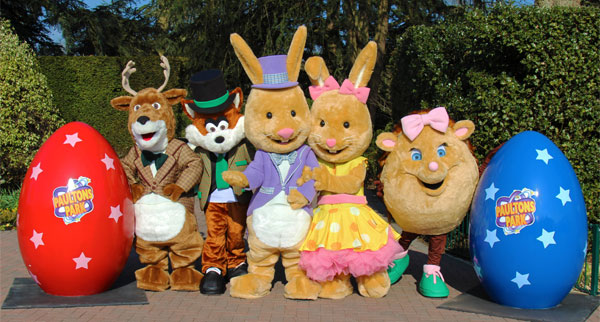 Get egg-cited for Easter
Paultons Park in the New Forest, Hampshire, has a series of Easter activities running daily from April 5-23. Peppa Pig World and Jurassic-themed area the Lost Kingdom will be adorned with giant, colourful eggs, and Bobtail Bunny and friends will be out in force to greet guests. Tickets start at £30.50, with children shorter than a metre allowed in for free.
paultonspark.co.uk

Sesame treat
Sesame Street at SeaWorld Orlando, which had its grand opening this week, is a great spot for tots to play with Elmo, the Cookie Monster and friends. Expect wet and dry play areas, rides, an interactive neighbourhood, and a fun-packed parade. Sister parks Aquatica Orlando and Discovery Cove have also become certified autism centres, with specially trained sta and quiet areas.
seaworld.co.uk

Dino duo
Head to Lightwater Valley theme park in Ripon, North Yorkshire, this Easter so little ones can meet the park’s new dinosaur mascots, Jester and Jasmine. Easter activities run from April 6-28, with a pirate-themed treasure hunt for eggs over the Easter weekend. Attraction World o ers entrance with queue jump from £22.50 (visitors taller than 1.3m) and £16.50 (1m-1.3m).
attractionworld.com 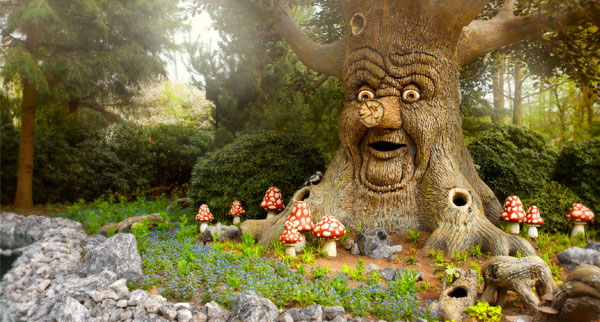 Swan Lake
Dutch theme park Efteling will add an attraction to its famous Fairytale Forest this autumn. Based on the Brothers Grimm story The Six Swans, it will feature six boat-shaped swans that young visitors can ride. The 30th attraction in the forest – and the first ‘mini’ ride – will join a host of fairy tale-themed scenes.
efteling.com

Laa-laa land
Alton Towers has added a Teletubbies Big Band Live Show at CBeebies Land, featuring interactive music and dance performances The twice-daily show, which starts next month, will be followed by a meet-and-greet session with Tinky-Winky, Dipsy, Laa-Laa and Po. Super Break offers one-day Alton Towers tickets plus a night at the Holiday Inn Express Stoke-on-Trent from £174 for a family of four.
superbreak.com/agents