David Whitley rounds up the most eclectic urban spots Down Under.

Australia and New Zealand’s big cities are the natural entrance hubs for first-time visitors, keen to base themselves close to the big-hitting sights of Sydney, Melbourne or Auckland.

But for those heading back to the Antipodes for a repeat visit, it may be worth branching farther afield to see smaller, less-heralded urban delights.

The original site of British settlement in Western Australia, Albany is built around a stupendously beautiful natural harbour, and for a long time, whaling was the main industry. This is explored at the former whaling station – now part of the Discovery Bay museum complex. It pulls no punches about how grim the job was, and does so inventively with massive oil silos now hosting videos and whale skeletons.

Presentation is also a strong point at the National Anzac Centre, which looks at the story of the First World War from an Australian perspective. Then a young, naive country, it joined the war enthusiastically, with thousands of the men sent to their deaths departing from Albany.

“Albany is built around a stupendously beautiful natural harbour, and for a long time, whaling was the main industry.”

Now, thankfully, Albany watches whales rather than catches them, and Albany Whale Tours heads out on whale-spotting cruises between May and October.

The Tasmanian capital has always been pretty and historic, but it has turned rather cool in the last few years, spurred largely by the opening of Mona – an uncompromisingly saucy modern art gallery that revels in the shock factor.

The city’s historic sites – the Penitentiary Chapel, Parliament House and Theatre Royal among them – come thick and fast, while the Cascade Brewery offers tours and the Royal Tasmanian Botanic Gardens are great for learning about native flora.

“The Mawson’s Huts Replica Museum delves into what Antarctic exploration was like a century ago.”

There’s also an interesting Antarctic heritage here – Roald Amundsen told the world of his successful mission to the South Pole from Hobart. And the Mawson’s Huts Replica Museum delves into what Antarctic exploration was like a century ago.

Book it: First Class Holidays has a 10-day Grand Tasman escorted tour, spending three nights in Hobart with a visit to the nearby Port Arthur convict site, starting at £2,495 per person.
fcholidays.com 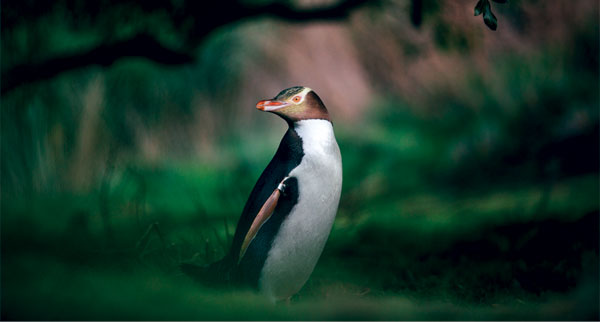 Dunedin has a strong Victorian look, with several handsome buildings sculpted out of grey and white stone. The railway station is the most photogenic of these. Other notable oddities include Baldwin Street, the steepest street in the world and an absolute thigh-sapping brute to walk up, but Dunedin’s major selling point is as the base for the Otago Peninsula.

This is New Zealand’s wildlife-watching capital, and Monarch Cruises offers various packages that include a cruise down the peninsula to see birdlife and seabirds, the Royal Albatross Centre where albatrosses roost, and Penguin Place, where yellow-eyed penguins can be seen shuffling around.

Book it: Premier Holidays offers a four-day self-drive jaunt on the South Island, spending two nights in Dunedin at the four-star Quest apartment hotel, from £395. premierholidays.co.uk

Enveloped by Greater Perth, but a city in its own right, Fremantle brims with cafes and historic warehouses turned into microbreweries, indie shops and native ingredient-focused restaurants. It’s a thoroughly lovely place to hang out in, and Fremantle Tours runs excellent walking and cycling tours that delve into the little spots and street art that the uninitiated might miss.

The big-ticket attraction is the Fremantle Prison, a convict-built World Heritage Site that remarkably only closed in 1991. Several tours are available looking at prison life, escape attempts and even venturing into the tunnels deep below the prison.

Fremantle is also the closest departure point for Rottnest Island, a car-free idyll with world-class beaches and hundreds of astonishingly cute quokkas to pose for pictures with.

Book it: The Hougoumont Hotel, partly made from converted shipping containers, is themed on the last convict ship to arrive in Western Australia, with rooms styled to look like cruise ship cabins. There’s also free wine and cheese each evening between 5pm and 6pm daily. If Only offers the property from £65 per person per night.
ifonly.net 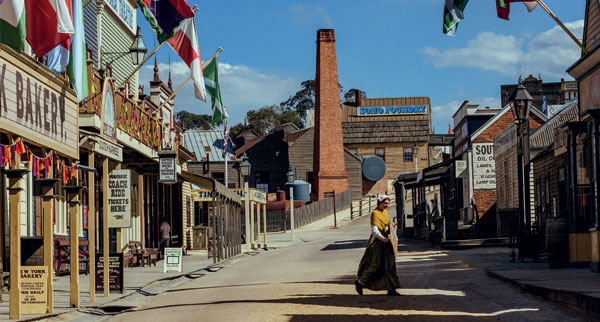 A 90-minute drive from Melbourne, Ballarat offers a slice of Australian history that most outsiders know nothing about. It sprang to life during the 1850s gold rush, and is regarded as the birthplace of Australian democracy largely thanks to the Eureka Stockade, where miners died fighting for representation. That story – and Australia’s as a whole – is told brilliantly at the Museum of Australian Democracy at Eureka.

But the main reason to visit Ballarat is Sovereign Hill, an extraordinary recreation of the 1860s mining settlement, with mine tours, gold panning, gold pours and tradespeople such as wheelwrights and candlemakers. It’s a giant open-air museum, and the interactive evening light and live action show telling the tale of the Eureka Rebellion is exceptionally good.

Book it: AAT Kings sells a full-day tour to Ballarat from Melbourne from £110.
aatkings.com 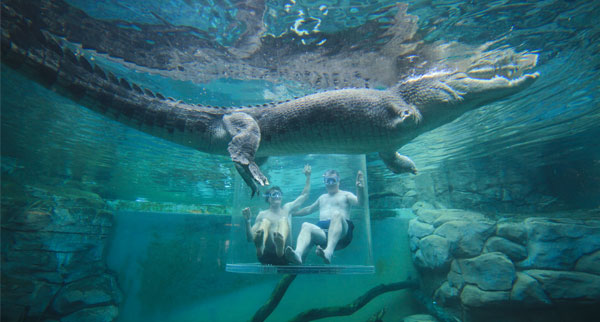 There’s an odd mix of outback, Asia, Aboriginal and bohemian hippy in the Northern Territory capital, plus a few rather unusual attractions. On Stokes Hill Wharf, a combined facility demonstrates how the Royal Flying Doctor Service supplies medical care to the vast outback, while also offering high-tech virtual reality recreations of the Second World War bombing of Darwin.

“The most memorable activity in Darwin is likely to be the ‘Cage of Death’ at Crocosaurus Cove.”

The highlight of the Museum and Art Gallery of the Northern Territory is the simulation of Cyclone Tracy, which nigh-on destroyed the city in December 1974.

But the most memorable activity in Darwin is likely to be the ‘Cage of Death’ at Crocosaurus Cove, where you’re lowered into the enclosure of a giant saltwater crocodile, protected only by a see-through acrylic box.

Book it: The superior lagoon king rooms at the Skycity Darwin complex are pretty special. They offer private terraces with steps down into the humungous swimming pool. Prices start at £255, or £89 for standard rooms.
skycitydarwin.com.au 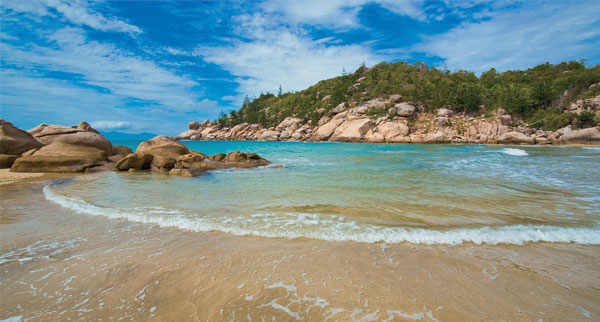 There are trips that head out to the Great Barrier Reef from northern Queensland’s largest city, although those going from Port Douglas and Cairns further north are closer to the fish and coral. The Reef HQ Aquarium, however, is a fantastic place to understand how the reef works, and there’s also a turtle hospital on site. The Museum of Tropical Queensland covers everything from dinosaurs to rainforest ecosystems, too.

But Townsville’s biggest drawcard is Magnetic Island. Technically a suburb and a short ferry ride away, the island has fabulous beaches, blissful walking trails, Second World War history and lots of wild koalas.

Book it: The classy, refined Peppers Blue on Blue combines apartments with resort accommodation on Magnetic Island. Rooms cost from £78 a night for a two-night minimum stay, for travel up to June 27.
peppers.com.au/blue-on-blue 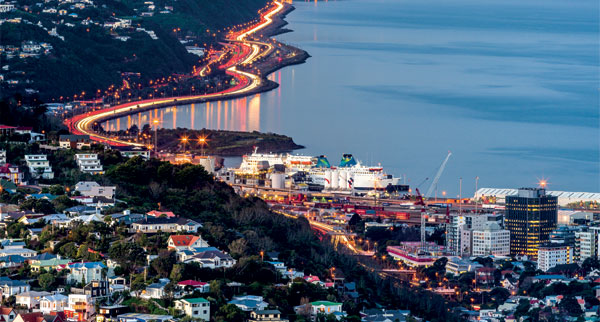 Counting a capital among small cities might seem a bit odd, but Wellington’s a pocket-sized, culture-heavy beauty. New Zealand’s best museum, the expansive Te Papa, covers everything from how volcanoes work to the migration routes of the Pacific Islanders.

There’s also the remarkable Zealandia, an attempt to restore a valley to how it would have been before humans arrived in New Zealand, and plenty of filming locations for The Lord Of The Rings. Twinned with them is the fascinating Weta Workshop, where special effects and props artists take visitors behind the scenes to see how the movie magic was created.

“Te Papa museum covers everything from how volcanoes work to the migration routes of Pacific Islanders.”

Book it: Opposite the parliament, the business-like but not cookie-cutter Bolton comes with a swimming pool – a rarity in New Zealand. Travel 2 offers a Classic suite from £73 per person based on twin share.
travel2.com

On the often-ignored east coast, Napier is usually skipped over in favour of the neighbouring Hawkes Bay wine region. That’s a shame, because it’s one of the most striking cities on earth, and for lovers of art deco, only Miami’s South Beach can compare.

After an earthquake in 1931, Napier was rebuilt in the style of the time, leading to a remarkably uniform look across the city. The Daily Telegraph Building and National Tobacco Company Building are among the stars. Tours run by the Deco Centre are the best ways to delve in, although the National Aquarium of New Zealand is also here for those who prefer wildlife to man-made magic.

Book it: Austravel sells a 12-day Follow The Grapevine self-drive trip from Auckland to Wellington, with two nights in Napier and three or four-star accommodation, starting at £2,479 including flights.
austravel.com 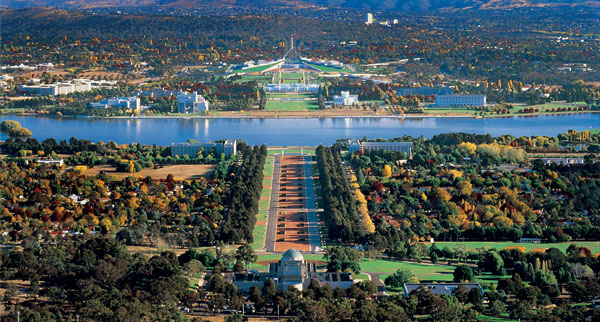 Canberra’s reputation as a holding pen for politicians is being shredded, with a number of hip hotel and restaurant openings.

To the visitor, however, the Australian capital is packed with some of the country’s best cultural attractions. These include the National Museum of Australia, which packs Australia’s traditions and history into cleverly-presented bite-sized chunks. The Australian War Memorial – with its incredibly moving Last Post ceremony at the end of the day – is engrossing for First and Second World War insight, and the National Gallery of Australia is a who’s who of Australian art.

For the more nature-inclined, the neighbouring Namadgi National Park is fabulous for mountain walks and Balloon Aloft offers hot-air balloon floats over the city to see how its carefully-planned urban design intertwines with the surrounding natural landscapes.

Book it: The centrally-located Waldorf Apartment Hotel has a family-friendly rooftop barbecue area, with studio apartments available from £80.
waldorfcanberra.com.au

Things to do in Auckland, the City of Sails
The best sights in New Zealand by land, air and sea
Exploring Fraser Island, Queensland