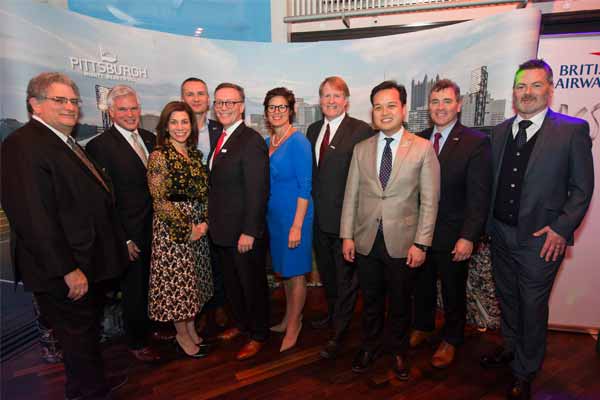 New direct flights from London to Pittsburgh will help establish the US city as a gateway to the American northeast, tourist bosses believe.

The service was launched at an official event at London’s National Theatre (pictured).

Craig Davis, president and chief executive of Visit Pittsburgh, said the flights would open up the city to UK travellers and those flying through Heathrow.

“British Airways is the gold standard so for Pittsburgh to be included on the network alongside the gateway cities is very important for us,” he said.

“The city is incredibly well-connected so we can see people spending four or five nights in Pittsburgh and then heading to Niagara Falls, Toronto, Washington DC, Philadelphia or Chicago.”

Davis said Pittsburgh would particularly appeal to lovers of arts and culture, sports fans and those looking for an ‘authentic American experience’, and said he believed good air links could lead it to become a popular twin-centre combining a city break with a Florida beach stay.

Around 200 agents in the UK and Ireland have been visited by Visit Pittsburgh’s UK representatives, while tourism and business leaders have also been developing partnerships to drive further traffic on the route.