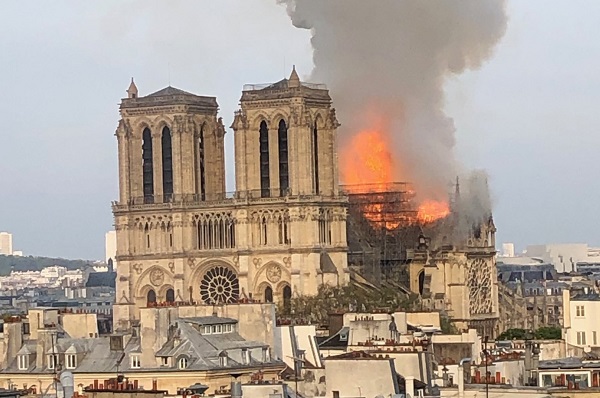 Around 13 million tourists a year visit Notre-Dame as one of the world’s top historic attractions.

While it is too early to say what impact the destruction will have on inbound tourst numbers to Paris, the cathedral is a major draw for visitors to the French capital.

A national fundraising campaign to restore Notre-Dame is to be launched today and he called on the world’s “greatest talents” to help.

One of the richest men in France was today reported to be donating €100 million towards the rebuilding of Notre-Dame but it is not known how long such an extensive project could take.

Francois-Henri Pinault is chairman and CEO of the Kering Group wich owns brands such as Gucci and Yves Saint Laurent.

The official website of the Paris Convention and Visitors Bureau carries an image of the Notre-Dame before the fire with the headline ‘Welcome to Paris!’ but no mention of the devastation.

The disaster came less than a week before Easter amid Holy Week commemorations.

The cathedral’s landmark rectangular towers have been saved as 400 fire-fighters fought for nine hours to tackle the blaze that ravaged two-thirds of the roofing and destroyed the spire.

Renovation work was underway at the 850-year-old building, but the cause of the fire is not yet clear.

Images on social media last night showed flames and smoke coming from the cathedral, a major tourist attraction in the French capital.

Areas around the cathedral were cleared of visitors as a major emergency operation took place to tackle the blaze.

The mayor of Paris, Anne Hidalgo, described it as a “terrible fire”.

The Catholic Church in France launched an appeal last year for funds to save the cathedral, which was starting to crumble.