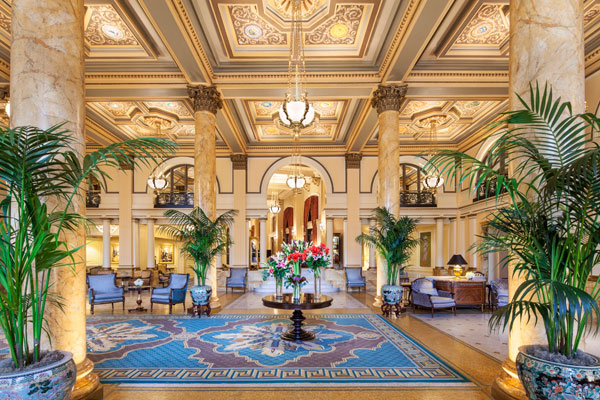 David Whitley rounds up some of the most historic spots to bed down across the pond.

Historic hotels are usually seen as a European thing, but head stateside and there are several old dames that have been around for decades, still oozing character and grandeur.

These are just some of the heritage hotels that can be included on an atmospheric American adventure.

The capital has a few hotels where power talks are held and deals get done, but none have the heritage of the Willard. The building dates back to 1818, although it has had several changes since, and has hosted virtually every US president since 1853. Former 19th-century president Ulysses S Grant coined the term ‘lobbyist’ here, Martin Luther King Jr finished off his ‘I Have a Dream’ speech while staying overnight and the National Press Club was founded here.

Now officially known as the Willard InterContinental, the 335-room and 41-suite hotel has a little museum section delving into its long, distinguished history. The circular Round Robin bar oozes atmosphere, and the lobby is more of a grand alleyway that hosts afternoon teas.

Book it: Rates start at $299 a night.
washington.intercontinental.com

Developed as part of a job creation scheme by president Franklin Roosevelt, the Timberline Lodge was built largely by hand using native timber and stone from nearby. It opened in 1937 and was declared a National Historic Landmark in 1977.

Set 1,830 metres above sea level on the south side of Mount Hood, it’s both ski lodge and mountain retreat. Much of the original decoration and architectural detail – wildlife and American Indian themes run throughout – are still in place, while the rooms have a ‘winter warmer’ vibe about them.

Movie fans, of course, are likely to instantly recognise the Timberline Lodge – it was used for the exterior shots of the Overlook Hotel in The Shining. Real life stays are considerably less creepy.

Book it: Rooms start at £127.
timberlinelodge.com 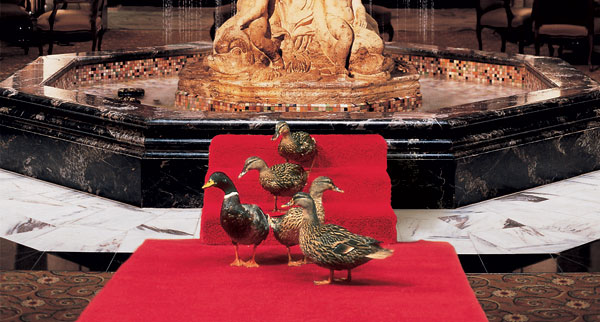 The Peabody was originally opened in 1869 on a different site, but its Italian Renaissance-style reincarnation opened in 1925. It’s had several owners and brushes with closure since, but having weathered those ups and downs, it has emerged as a figurehead for the rejuvenation of downtown Memphis. The lobby, with its massive fountain and stained-glass ceiling, is lavish, and the rooftop has become famous for hosting parties and live bands.

That may be firmly 21st century, but the hotel’s most-loved tradition has been going since 1933. The five mallard ducks that live on the roof perform a march through the lobby at 11am and 5pm every day. The ‘duckmaster’ even leads historical tours of the hotel each day at 11.30am.

Book it: Rates at The Peabody, part of the Preferred Hotels & Resorts collection, start from £153 per room per night.
peabodymemphis.com

In a country where most hotels are parts of chains, the Monteleone’s family-owned independence makes it stand out. In 1886, Royal Street was New Orleans’ swankiest, most-elegant address, and the new hotel matched it. Sparkling brass, polished marble floors and decadent chandeliers are still the order of the day, and the lobby’s grandfather clock is something of an icon, as is the Carousel Bar, which revolves every 15 minutes.

The Monteleone is a literary landmark as well as a historic one, with a long history of hosting famous authors such as William Faulkner and Truman Capote.

Book it: Rates start at £153 via Preferred Hotels & Resorts.
hotelmonteleone.com

Inn at the Presidio, San Francisco

The Presidio – once a Spanish military base – is older than the United States. The complex was opened in 1776, and the US army only moved out in 1994, when the Presidio was handed over to the National Park Service.

There are just 22 rooms, and the whole place feels weirdly detached from modern-day San Francisco. The classic redbrick building that hosts the inn was originally the Pershing Hall Bachelor Officers’ Quarters, built in 1903. With a grand central staircase, entrance hall and an outdoor deck with a firepit, there’s still a sense of it being somewhere for officers to relax. It’s three storeys high, with tremendous views of the Golden Gate Bridge from the top floor.

Book it: Rates from £237.
presidiolodging.com 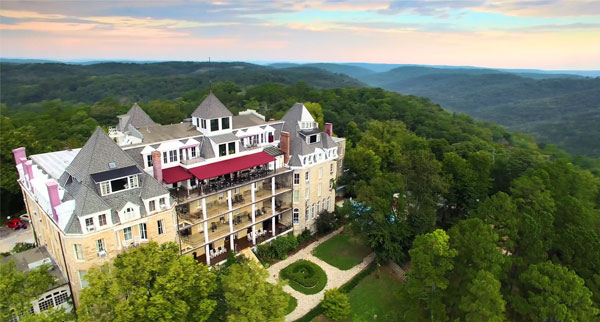 Sitting loftily above the quaint, Victorian-looking Eureka Springs, the 1886 Crescent Hotel & Spa is perhaps the most cherished accommodation in the Ozark Mountains. Carved out of native limestone and connected to the downtown shopping and gallery district by a maze of hidden trails, the hotel makes a big thing of its 19th-century character. The lobby is handpainted with elaborate fireplaces, the verandas perfect for a lazy early-evening glass of wine and the Crystal Ballroom grandiose.

The huge spa – popular with wedding parties – occupies the garden level, and the formal gardens have become a major part of the appeal since the hotel’s renovation in 1997.

There’s an activity focus, too – with wine tastings, ghost and art tours, walking trails and storytelling sessions regularly on the agenda. 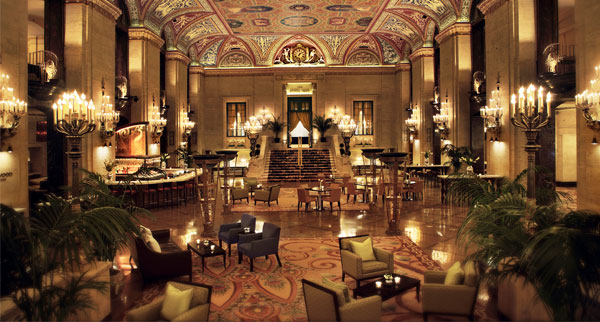 Originally a gift from a business magnate to his socialite wife, Bertha, the original Palmer House burned down in the Great Chicago Fire just 13 days after it opened. Potter Palmer was determined to rebuild, though, and the second incarnation became one of the world’s finest grand hotels.

Much of this is down to Bertha, who turned the lobby into something extraordinary, with several glass artworks by Louis Comfort Tiffany, a staggering ceiling fresco, and lashings of French impressionist art, with 24-carat gold chandeliers, huge brass angels and intricate woodworking adding to the wow factor.

Book it: Rates from $219.
palmerhousehilton.com

The longest continually operating hotel in the States, Parker House opened in 1855 and was a fabled hub for the 19th century’s leading literary lights. The likes of Emerson, Thoreau, Hawthorne and Longfellow regularly met here, but the name-dropping extends beyond the guests – both Malcolm X and Ho Chi Minh once worked here.

The Boston cream pie – the official ‘state dessert’ of Massachusetts – was rustled up in the kitchen, while the vintage vibe shines through in the decor. Elevators are garnished with decorative bronze, walls are panelled in American oak, and crystal chandeliers hang above elegant, private alcoves.

Book it: Rates start at £136.
omnihotels.com/hotels/boston-parker-house