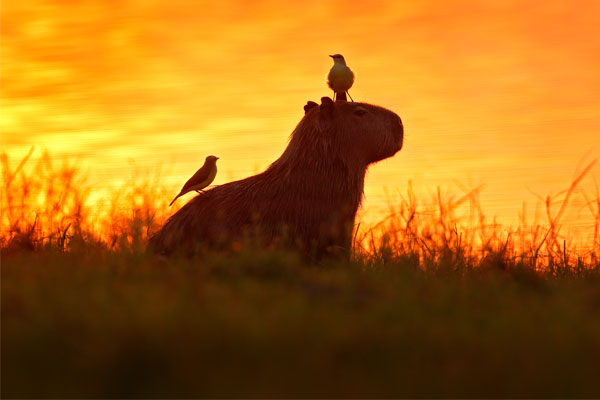 When it comes to wildlife, the Pantanal is Brazil’s best-kept secret, finds Natalie Marsh.

“Oh look, a squirrel,” says Molly Cofman-Nicoresti from specialist tour operator Latin Routes, as she points vaguely at a tree to the left. Our tour guide Juan stops dead and looks at the tree in astonishment. “A squirrel?”

We’re deep in the Pantanal in Mato Grosso, Brazil – one of the most concentrated environments of biodiversity in the world. Flocks of exotic birds take off from trees above our heads, insects crawl beneath our feet and the echo of a group of howler monkeys can be heard in the distance, as the morning sun beats down.

Despite these overwhelming sights and sounds, to my surprise, our guide’s attention turns wholeheartedly to the familiar-looking squirrel. He stands on the path watching it in awe, in the same way I had peered up at a beautiful hyacinth macaw just a moment earlier. Juan can’t believe what he’s seeing. Apparently, squirrels are extremely rare here, though for us, it’s the only recognisable animal we’ve seen.

The Pantanal in western Brazil spans an area of more than 70,000 square miles – almost the size of England and Scotland combined. Often overshadowed by the Amazon, which is even bigger, the Pantanal is the world’s largest wetland, with an environment much less dense than its commonly known counterpart.

The area is easily accessible from Cuiabá in western Brazil and Campo Grande in the south, and offers a great counterpoint to the buzzing cities and beaches elsewhere in Brazil. 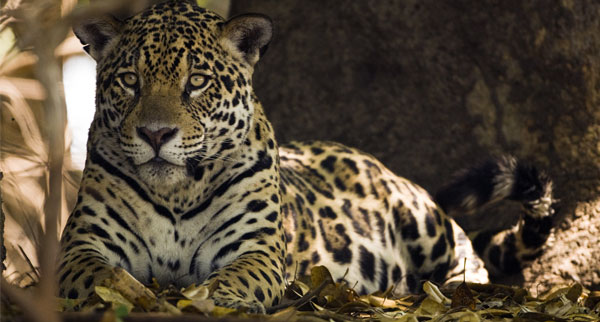 The second I stepped out of the car on to the deserted Transpantaneira – the 91-mile entry road into the Pantanal from Cuiabá – my senses were overwhelmed. Dragonflies and butterflies whizzed past my face, while I kept a cautious eye on the caiman that was sitting still in the water just over the fence. Dozens of exotic birds and insects chirped and buzzed in unrecognisable rhythms all around me. Every single noise was new and unfamiliar.

A further 18 miles down the road was our home for the next few nights, Araras Pantanal Eco Lodge. Set right in the heart of the wilderness, it has nearly 3,000 hectares of private land where guests are taken out on tours, according to Akhila Krusic, one of the lodge’s owners. “It’s a big piece of land where we do safaris, night drives, horse riding and trekking,” she says. 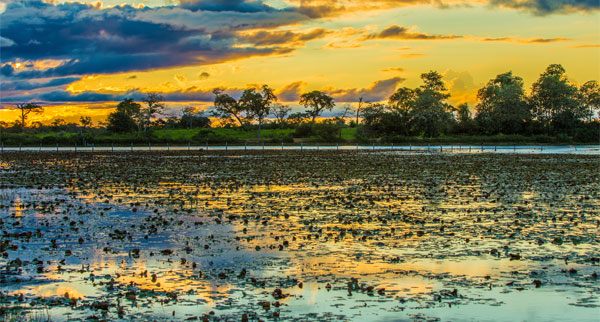 Comprising 19 guest rooms, the eco-lodge welcomes visitors from every corner of the world. “Often we have six, seven, eight, nine different nationalities,” says Krusic. “Our record is 13 nationalities at one dinner. Our clients who come are all big nature lovers, so we all share a passion.”

Despite being referred to as a wetland, the Pantanal’s waters last only half the year, receding in April and May and not returning until October. This is the best time to spot jaguars – one of the main reasons that nature lovers flock to the region. From early November, the rainwater runs in from the surrounding mountains, flooding most of the plain until April.

Krusic’s favourite season is at the start of the year. “You’ll see lakes with water lilies and caimans swimming by,” she says. “It’s really gorgeous.”

I was engrossed in the scenery around me when suddenly, one word had me sitting up in my seat. “Puma!” Juan whispered, his voice a mix of excitement and desperation for us to get as close as we could as quickly as possible. The wind whipped across my face as we hurtled down the pitch-black dirt road, towards the two gleaming eyes up ahead.

Huddled in the back of the 4×4, trying not to move a muscle, torches pointing forwards, we became an instant magnet for the night-time bugs, but we didn’t care. A puma was strolling slowly across the road right in front of us and into the same field as a group of horses, which were eyeing the predator cautiously as it made its way into the bushes and out of sight. It was exhilarating. We couldn’t stop high-fiving each other. It was the first puma sighting for 10 months, he said.

The excitement and anticipation of seeing wildlife here is infectious. Conversations over dinner with other guests always centred on which animals they had been lucky enough to have seen that day and where. People passed around their phones and cameras, sharing their experiences – and the guides were just as intrigued as the guests. Even after all these years, their love of wildlife hasn’t waned.

The night safari was a fantastic way to get close to the Pantanal’s incredible nature. Araras Eco Lodge also offers day safaris, horse riding, canoeing in the wet season and various walks to explore the wetlands.

The lodge owns three observation towers within walking distance, which are the perfect place for photo opportunities and for taking in 360-degree views of the amazing landscape. It was from up here that we saw toucans perching on the treetop right next to us and an anteater slowly plodding along in the distance, and witnessed one of the most incredible sunsets. We could quite happily have spent hours up there, enjoying the noises of the hundreds of species of wildlife all around us.

Like many thriving ecosystems across the planet, the Pantanal is under threat from human activity such as deforestation and the unsustainable development of infrastructure. However, Araras Eco Lodge is doing its part to ensure that it is environmentally responsible, and helps the local community wherever it can.

“We follow the ‘farm-to-table’ concept,” says Krusic. “We produce free-range beef, lamb, buffalo meat, milk, cheese and honey at our farm. We have our organic vegetable garden for salads, and the rest we try to buy locally, as much as possible.”

Despite their desire to grow even more themselves, sharing the land with so much wildlife means food is fair game. “We have so many animals,” says Krusic. “We have capybaras breaking the door down and coming into the vegetable garden.” 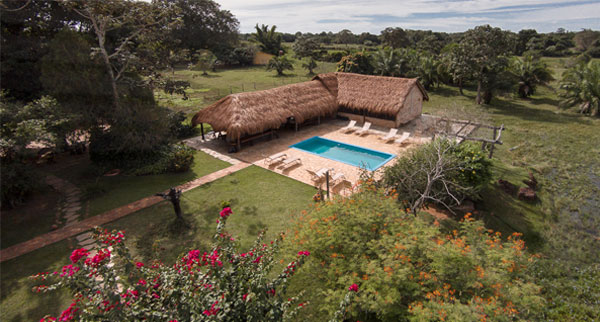 Being so remote, Araras Eco Lodge has taken measures into its own hands to ensure it remains sustainable. Any water used for cooking or drinking is collected from deep underground before being filtered through a complex purification process until it is safe to drink. The lodge also recycles all waste products, using anaerobic bacteria to start the filtering process again.

For adventurers and animal lovers alike, the Pantanal is a destination unlike any other. Standing silently among towering trees, watching a group of monkeys leap from branch to branch, it’s hard to imagine anywhere else this beautifully raw and wild. And you might be lucky enough to spot a puma, an anteater… or even a squirrel along the way.

Latin Routes offers three nights in the Pantanal, staying at Araras Eco Lodge, from £1,579 in the dry season and £1,299 in the wet season. The price includes return flights from São Paulo, full-board accommodation, transfers and a guide, but excludes international flights. Guests would typically combine the Pantanal with Rio de Janeiro, Iguazu Falls or the Amazon.
latinroutes.co.uk