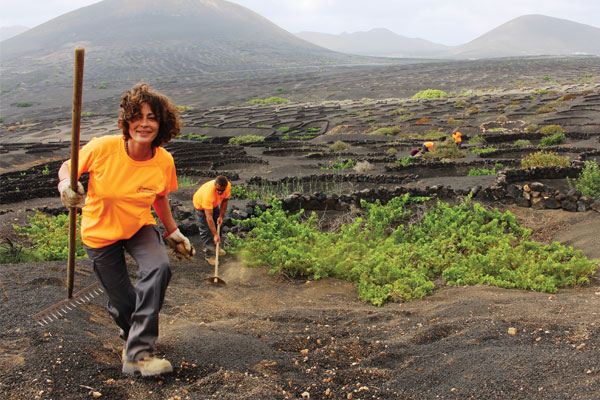 Lanzarote’s winemakers are returning to the ways of old, finds Katie McGonagle.

“This is the beginning. Everything started with the volcano,” says Ascensión Robayna, picking up a handful of coal-black ash and letting the dark flecks spill through her fingers.

Like the rest of Lanzarote, the vineyard that supplies Bodega Bermejo is covered in a layer of thick black ‘picón’, a remnant of an enormous volcanic eruption that lasted six years and buried a quarter of the island’s surface below a blanket of lava.

But like a phoenix rising from the ashes, the islanders were able to salvage something from the jaws of disaster. They couldn’t grow vegetables or graze cattle any longer, but with the aid of rich volcanic soil, there was one thing they could now do better than before: make wine.

Lanzarote’s first winery opened in 1775, just 45 years after the eruption. And now, some of the island’s vintners are resurrecting traditional methods of organic winemaking with a little help from the Tui Care Foundation.

“It’s important to know, when you test the wine, what the beginning was, and how the farmers adapted to this landscape,” says Robayna, who left her job as an accountant in the nearby village of Montaña Blanca to clear an abandoned vineyard and restore it to its fruitful former life.

“It’s important to bring back traditional methods, to reflect this winemaking role. It’s a way of preserving the landscape, our culture and our heritage.” 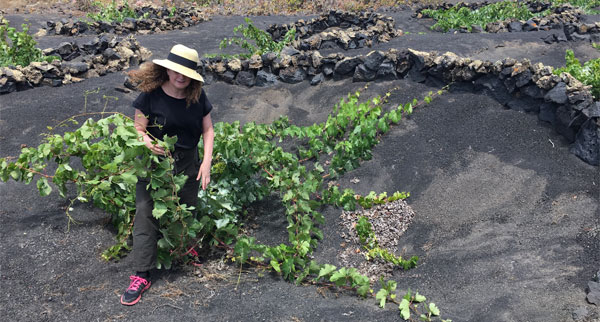 Heart of the matter

Robayna is based in La Geria, a fertile area at the heart of the island that is the centre of its winemaking industry. It’s also home to the vineyards supported by the Tui Care Foundation, in partnership with German sustainability initiative Futouris, in a project that not only helps local winemakers but also provides employment for people with disabilities.

With its dark, churned-up landscapes, palm trees bent over by the wind and brooding mountains framing the background, it’s hard to believe the islanders manage to make anything grow here in La Geria.

But dig deep, below the layer of volcanic debris, and the soil is more fertile than ever, insulated from the sun and wind by a protective blanket of picón. That’s why the dark terrain is pitted with funnel-shaped holes – one vine in each – dug out of the earth and sheltered from the wind by a crescent moon of stones, each built up in a half-circle at the edge.

It’s hard work, though. The island gets less than 150ml of rain a year, so water is scarce. The local varieties of grape – malvasia, listán blanco and negro, muscatel and diego – are small and sweet, yielding barely a tenth of the harvest of rioja or other more fruitful crops. And while other vineyards use machines to trundle up and down their long rows of vines, these grapes must be harvested by hand.

But it’s a challenge worth facing, according to Rafael Espino Curbelo, owner of Bodega Vega de Yuco, which produces around 4,000 bottles of organic wine among its total output of 200,000 bottles a year.

He says: “Many farmers decided to change from traditional winegrowing in funnels to lines, because you can save time and money. But now we have to add value to the wine.

“There are many growers out there, so the final product has to be better. This is the best way to produce, to protect our traditional landscapes and preserve the story of the wine.”

Book it:Tuioffers a four to eight-hour Ecological Wine & Dine Experience visiting Bodega Vega de Yuco and Bodega La Geria, from £95 including tour, lunch and wine tasting, and transport from many hotels on the island.
tui.co.uk