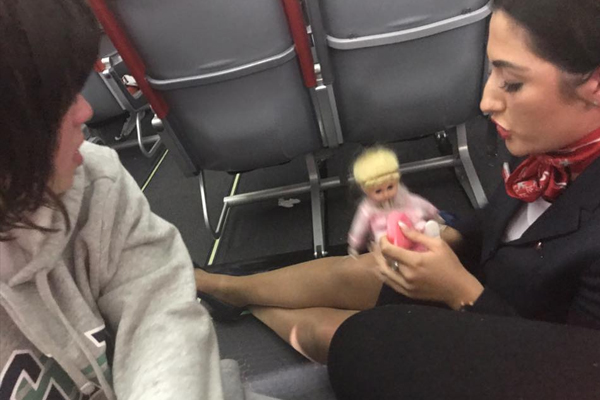 A mum has praised Jet2 staff for the care they gave her autistic son after he had “a meltdown” when prevented from boarding a Ryanair flight.

Helen Wakefield claims Ryanair demanded hand luggage payment when her 15-year-old son Leo, who has a mental age of three, tried to board a flight from Alicante, Spain, with a toy doll.

She said Ryanair staff showed no understanding of her son’s disorder by touching him during the dispute, causing him distress.

Carer Laura Wilburn, who was travelling with Leo, said he was sedated by Spanish authorities and placed in a wheelchair.

“Leo has travelled on planes since he was three and there has not been a significant incident,” said Wakefield. “This situation has been horrendous.”

She added that Jet2 staff showed “compassion, knowledge and care” by reassuring Leo as Wilburn bought the pair new air tickets, and staying with him until boarding.

Wakefield added: “As he was so frightened, they spent time trying to calm and reassure him.”

A picture of Leo chatting with Jet2 cabin crew has been shared on Facebook 80,000 times since Wakefield posted it on Saturday.

Wakefield said she would never fly with Ryanair again, claiming staff “showed ignorance and a lack of awareness”.

A Ryanair spokeswoman denied Leo and his carer were prevented from boarding and claimed Wilburn made the decision not to fly at passport control, where Leo became “agitated” before being taken to the airport medical assistance team.

“These two passengers did not arrive at the boarding gate, and therefore, they were not ‘denied boarding’,” she said. “Neither were they charged for any hand luggage.”