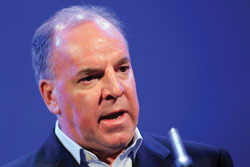 The boss of The Co-operative Travel has revealed that negotiations on a deal with Kiss Flights stalled because the retailer was driving a hard bargain to “minimise its risk”.

UK managing director Mike Greenacre said: “I’m pragmatic and said I was happy to negotiate. I said if we could reach a commercial position with Kiss that satisfied our criteria, I would be happy to sell them.

“On two occasions in the past, we’ve lost money by dealing with some or all of the people involved in Kiss Flights, so my terms were not about commissions, rather about protecting our business.

“We can’t continue to put ourselves in positions with suppliers where we could be put at risk. I don’t think our demands were unreasonable.”

Last week Travel Weekly revealed Kiss had put the Co-op group’s Freedom Travel agents that had their own deals on stop-sell, after talks on a group deal broke down.

Greenacre added: “We were waiting for Kiss to come back on what we’d agreed verbally but, it would appear that [Kiss boss] Paul Moss doesn’t want to do business on the basis that I’m prepared to do business.”