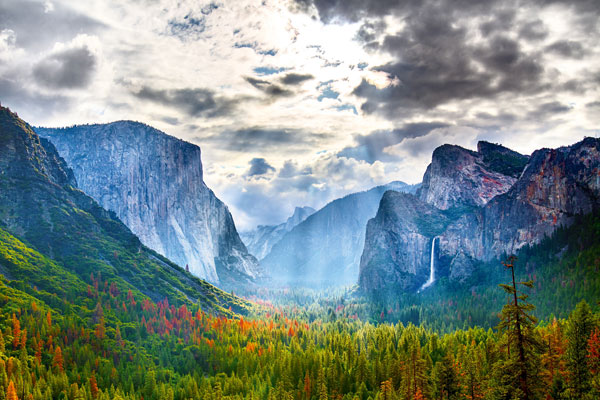 Swap the rat-race for your own pace on an in-depth adventure in Yosemite, writes Ella Buchan.

A mile sounded doable. A mile sounded easy, even. But when that mile zigzags over dozens of switchbacks, on vertiginous, dusty paths scattered with loose, gravelly rock, it may just as well be 10.

Experienced hikers know this, of course, and a few members of our tour group took it in their nonchalant stride, pausing to gaze across the Yosemite Valley while the rest of us caught up.

That’s the whole reasoning behind Grand American Adventures’ in-depth tours, which launched in 2018. They are designed to take things slowly and soak up the scenery, rather than rushing to tick off the highlights.

While some escorted group adventures cross multiple states, these shorter trips – usually a week – zoom in on one particular destination or area. And they do so in luxury, with upgraded accommodation in stylish hotels and rustic-chic lodges.

I joined the Yosemite and Tahoe tour, which focuses on a particularly picturesque pocket of California’s wild and wonderful scenery. The trip, capped at 13 people, starts in San Francisco.

For our group, there was no need for formal introductions. We’d all trickled into the lobby of our first hotel, the Kimpton Buchanan in the city’s Japantown, for the daily wine hour.

We were strangers until the second glass of wine, then a welcome dinner of ‘shabu-shabu’ – a kind of Japanese hotpot where you cook thinly sliced meat and veg in shared pots of simmering broth – sealed the bond.

Keeping the groups small and easing everybody into the trip on the first evening makes this a good option for clients who may be apprehensive about joining an escorted tour. My group of nine, plus driver/guide Charlie, included couples and solo travellers across a broad age range. It was small enough for everyone to get to know each other without being too intense – which was just as well with hours spent together on a minibus. Often, though, the scenery rendered our group silent.

Hugging the coast south of San Francisco, we passed long, empty biscuit-coloured beaches, and stopped to stretch our legs and inhale air scented with salt and fragrant shrubs.

Pelicans dried their wings in the early morning sun, while a man with flowing white hair leaned languidly against his surfboard nearby. Up on the bluffs, a father and son wriggled into matching wetsuits, while a woman with salt‑thickened hair perched on the bonnet of her car, gazing at the ocean. 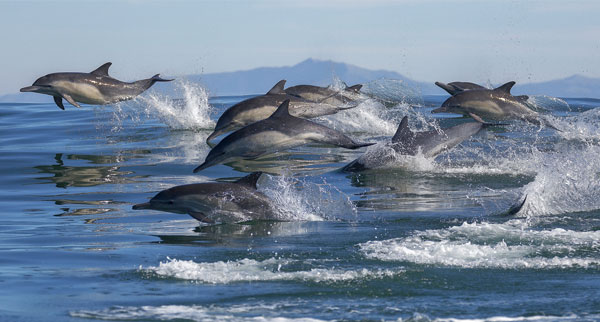 The trip has plenty of opportunities to get active, but we were eased into it with our first stop, Monterey.

This coastal town combines seaside charm with a village‑like vibe. Cottages line streets close to the old factories of Cannery Row, now home to shops, galleries and restaurants, while Fisherman’s Wharf is a joyful combination of seafood restaurants and harbour seals.

We joined one of several whale-watching boats departing the wharf. Pods of dolphins showed us where the shoals of fish could be found, inevitably followed by feeding humpback whales. I spotted at least a dozen.

Most activities are included on in-depth tours, minimising awkward discussions and reducing the risk of people splintering off. But fitness and energy levels will inevitably vary. So while the whole group enjoyed strolling around Mariposa Grove – home to some of Yosemite National Park’s tallest and oldest sequoia trees – a few opted out of the more challenging hike, following the switchbacks up to Yosemite Falls.

We were joined by Yosemite Conservancy naturalist Allison, who patiently endured endless variations of “Are we there yet?” (The answer was pretty much always “No”.) The first mile was particularly tough, she explained, because we’d gained 1,000ft in elevation.

We paused to catch our breath, gulp water and nibble on snacks of chocolate and energy bars. A Steller’s jay, with azure feathers and a dark, punky crest, hopped from branch to branch in an oak tree, mocking us with its chuckling call. 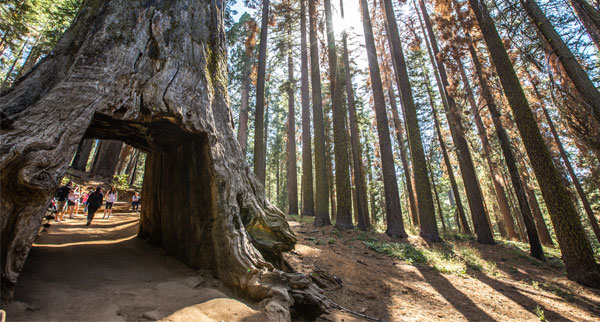 It spurred me on, somehow, as did the surroundings. While the elevation might slow walkers down, you also have to allow extra time to stop and stare at the scenery, a seemingly endless ramble of sage-grey peaks and slopes studded with spindly ponderosa pines. And the slog was worth it.

The clifftops above Yosemite Falls, around three and a half miles from the trailhead, are strewn with huge, smooth boulders. We sprawled on the rock, eating our packed lunches and silently staring across the valley. Views stretch across to the park’s famous Half Dome, which looks like a giant marble sliced down the middle. “It was never a full dome,” explained Allison.

We still had to get down, of course, but thankfully the shop at the bottom sold chilled beer. 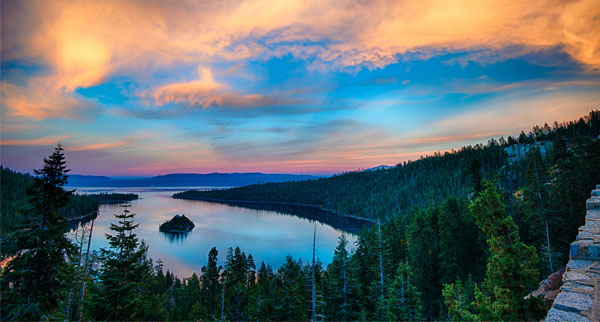 Lady of the lake

The Rubicon Trail in South Lake Tahoe, our next stop on the trip, was less strenuous but equally scenic. Dirt paths cushioned with soft pine needles follow the curves of the sapphire water, passing shingle coves and rocky outcrops to reach Emerald Bay State Park. I splashed into the crisp, limpid water to cool off, quickly re-emerging to warm up on the sandy beach.

There was just time for one last stroll before returning to San Francisco – across the Golden Gate Bridge. Even for regular visitors, there’s something special about seeing those rust-red arches and girders up close – especially when you’re not in any particular hurry.

Ziplining, cycling and river-jumping through Vermont
Adventures in America’s wild west
Mountain getaways in the US