Clare Tobin, chief executive of Olympic Holidays, has raised more than £4,000 for a children’s charity – and conquered her fear of heights – by abseiling down the 450-ft British Airways i360 tower in Brighton.

The £4,200 she raised for Alder Hey children’s charity will help pay for Ollie’s Room, a distraction room with 4D immersive projection, lighting effects and surround sound which is said to reduce the need for sedation by 40%. 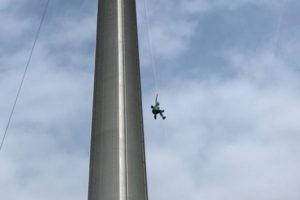 She smashed her initial £3,000 fundraising target for tackling the 450-ft drop on Saturday, May 18.

Olympic Holidays had already provided £55,000 for Alder Hey and its Ollie’s Room project before Tobin’s abseil. Money has been raised at events including Greek coffee and sandwich mornings, car boot sales and barbecues.