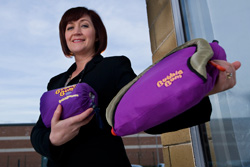 A former Travel Counsellors consultant has invented a portable child car seat after being frustrated by the lack of safety provisions abroad.

Grainne Kelly from Londonderry in Northern Ireland developed an inflatable car booster seat, BubbleBum, which folds flat and can be carried in a rucksack or handbag, making it suitable for taking on holidays to use in rental cars or taxis.

She said: “I was travelling to England a lot with my two sons, and every time I reached the car hire desk having pre-booked child seats, they never had them.

“I also discovered my clients were picking up cars without booster seats, even though I had pre-booked them. I tried to investigate alternatives in the market and found that there wasn’t one.”

Kelly travelled to China in March last year to have her idea for a portable, inflatable car seat made into a prototype, and her first shipment was delivered to Ireland in December.

Having secured safety approval from the EU, she has been selling the seat online, and is on the verge of signing distribution deals with several retailers, including a travel company, she said.

Kelly, who was a travel counsellor for five years until she started developing the BubbleBum full time in August 2009, plans to travel to the US in April to complete the product’s safety approval there.

Affordable Car Hire managing director Angela Day said she was considering selling a similar product through her site, but added: “We have never had an issue with a supplier failing to provide a seat and the majority of our bookings are from families.”