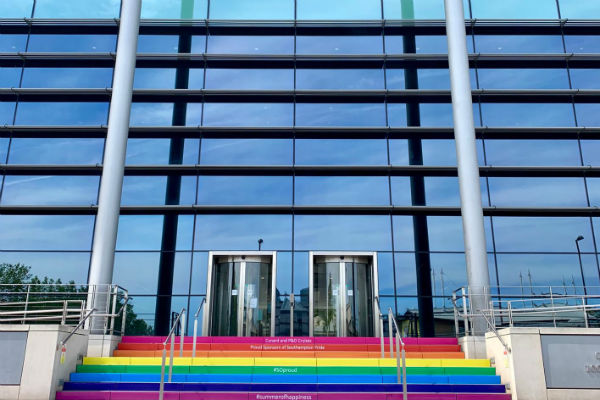 Cunard and P&O Cruises have been confirmed as headline sponsors of Southampton Pride, the annual festival that celebrates the LGBT community.

A three-year partnership has been agreed for the event which takes place on August 24 and is expected to attract more than 15,000 people.

The front steps of the lines’ Carnival House base in the city have been transformed into rainbow colours, a symbol used to celebrate the diversity of the LGBT community.

During the festival the Headliners theatre company from P&O Cruises Azura will be performing and Cunard and P&O Cruises team members on the day will be taking part in the main parade and hosting stalls.

Cunard and P&O Cruises ships will fly the Pride flag during their calls to Southampton that weekend with Azura hosting a Southampton Pride sail away on August 24.

Carnival UK president Josh Weinstein said: “Both Cunard and P&O Cruises have a proud and long history of welcoming LGBT guests and crew on board our combined fleet of ten ships. We are delighted to be participating in this event and several others around the world.

“In addition, here at Carnival House, home to the Cunard and P&O Cruises shore based teams, we recently launched our internal campaign ‘Summer of Happiness – My Best Me’, running from May until September, which is focused on encouraging and supporting each and every one of our employees to be the best version of themselves and achieve their maximum potential, irrespective of gender, sexual orientation, age, ethnic background, religion or ability.”

Chair of the Southampton Pride organising committee, Julianne Watling-McCarthy, added: “This partnership helps to secure our future and will allow us to offer everyone in the city of Southampton the opportunity to take part in this free, family friendly event.”