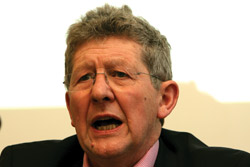 The outbound travel industry should join forces with the domestic sector if it wants to capture the attention of the incoming government, according to Liberal Democrat shadow tourism secretary Don Foster.

Speaking ahead of the general election, which prime minister Gordon Brown this week confirmed would be held on May 6, the MP for Bath warned the “fragmentation” of the industry would hold it back from making an impact.

With experts predicting the outcome of the election could be a hung parliament, the Liberal Democrats could end up holding the balance of power and with far more influence than they do now.

Foster said: “There is a real danger this fragmentation means the travel and tourism industry is not speaking with a single voice, which will make it difficult to put over the message that tourism matters to the new government.

“The body that covers outbound travel needs to be closely linked to the tourism industry. I do believe the industry has got to come together to have one voice on the key issues that affect the industry overall.”

Foster, who also served as shadow transport secretary from 1999 to 2001, argued that a dedicated tourism minister was not the way to push the sector higher up the government’s agenda.

The Travel Weekly campaign has won widespread support and a petition on the Number 10 website has gained almost 1,000 signatures.

However, Foster said creating a minister would be a “tokenistic gesture”.

“Given that tourism is such an important part of the economy, we need a cabinet committee studying all the different aspects of tourism,” he said.

Acknowledging that government’s focus is usually on inbound and domestic tourism, Foster stressed it was “critical” that the incoming tourism minister also recognised the importance of the outbound industry.

“While we want people to holiday at home and attract people to this country from abroad, we cannot ignore the fact that many people want to travel abroad. There are many jobs involved in the outbound industry and it is very important that we support it.”

Foster welcomed the current Department for Transport consultation over the Atol regulations, adding: “I wish it had begun sooner and it will be up to the new government to take on board the advice that comes as a result of the consultation.”

Like the Conservative party, the Liberal Democrats have voiced their opposition to the expansion of Heathrow, something Labour controversially supports having given a third runway the green light.

“We would prefer to look at regional airport development,” said Foster.

“We can’t deny that air travel is an important part of tourism, but there are too many environmental concerns.

“We would favour high-speed rail rather than the growth of internal flights, and reduce the pressure on Heathrow,” he added.

Asked about his own priorities for the sector, he said there was a “strong case” for double summertime – moving the clocks forward two hours during spring and summer – which would give lighter evenings and darker mornings through the year.

The Liberal Democrats have put together a set of proposals aimed at helping small and medium-sized businesses in tourism. The plans include additional funding for small businesses and paid intern-ships with financial support.

“We have to look at the incredible burden of red tape. There needs to be reductions there,” Foster said.

Making the most of the London 2012 Olympic Games is also a serious concern for the Lib Dem Olympics spokesman.

“The government has been too slow at developing a legacy plan for 2012. What matters is we get the attention of the world, and nothing like enough has been done.”

Although Foster defended the legislation that prevents agents from using Olympic- related terms, such as London 2010 or Games, from their marketing materials (Travel Weekly, March 19), he called for more support for small businesses that want to benefit from the event.

“I am not critical of legislation about brand protection – I am more concerned about the way we don’t appear to be providing detailed advice and support for travel agents,” he said.

Also in this series