Rachel Roberts discovers the advantages of an escorted tour around India’s Golden Triangle and tiger trail.

Curls of smoke from the kettle on the open fire reach into an Indian sky, thick with rain. Our tour guide, Aarti, busies herself, helping to prepare the essential ingredients of black tea, cardamom and condensed milk for our impromptu chai stop at a ranger’s outpost in Ranthambore National Park.

Soon, the tea is ready, and our 12-strong Saga Holidays fam trip group gratefully sips the hot, sweet liquid. It’s a perfect moment and a perfect example of the benefits of booking an escorted tour – independent travellers simply wouldn’t have the local knowledge required to drop by for a cuppa.

We were leaving the vast national park in the north of the country, deeply moved after witnessing the incredible sight of four tigers – a tigress and her three offspring of grown-up cubs who were on the verge of making their own way in the world – lolling lazily under the welcome shade afforded by a dense patch of trees. With the mercury hitting 47C in May, we could sympathise!

For nature lovers, the Ranthambore National Park excursion is a delightful addition to Saga’s Golden Triangle Tour, which takes in the classic destinations of the capital, Delhi; Agra, home to one of the seven modern wonders of the world, the Taj Mahal; and Jaipur, the Pink City, swirling in history and romantic stories of ruling Mughals and seductive concubines. 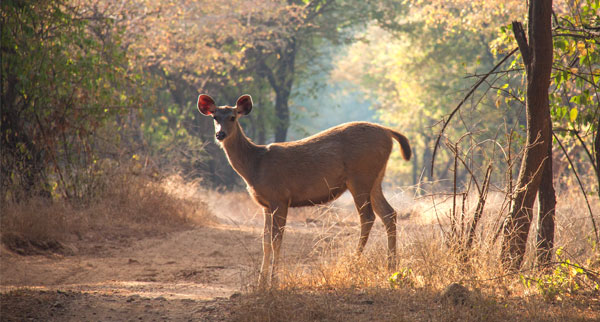 The park, lying in the shadow of the Aravalli Hills in the Rajasthan region, is a famous tiger reserve and a fine example of Project Tiger’s conservation efforts in action. It’s home to around 65 of the magnificent creatures, so the chances of a sighting – at around 80% – are high for visitors. The tigers are the headline act, for sure, but on our safari in a canter (an open‑air vehicle designed for the rugged terrain), we also spied many of the park’s other residents, including herds of sambar deer (a favourite snack for our tiger friends), colonies of macaque monkeys, fish owls, alligators and a plethora of bird life in the skies above. Leopards also roam here, but we didn’t spot any of the elusive big cats.

As we made the hour-long journey back through the park – past the picturesque ruins of Ranthambore Fort, once the seat of the maharajas (royal kings) of Jaipur – the skies opened, leading us to seek shelter at the nearby outpost. The rangers seemed to enjoy our spontaneous pit-stop as much as we did, even giving us a tour of their modest accommodation.

Our journey had begun four days earlier in the capital city of Delhi, an exciting introduction to the sensory intensity of this vast country of 1.06 billion people. Divided into ‘Old’ and ‘New’ Delhi, we took a tour of the ‘old’ city of Shahjahanabad, founded by the greatest Mughal emperor, Shah Jahan.

A thrilling rickshaw ride jiggled and rattled us through a maze of narrow, busy streets, past time-worn buildings, wedding shops selling jewel-bright adornments and stalls selling paratha, a staple Indian dish of fried flatbread stuffed with savoury fillings – the whole ride accompanied by the cacophony of thousands of Delhiites going about their daily business.

Afterwards, a visit to Raj Ghat, the cremation site of social activist and ‘father of India’ Mahatma Gandhi, provided a welcome moment of serenity. It also highlighted another benefit of an escorted tour – our knowledgeable guide was on hand to explain the significance of the site.

Simple yet striking, the commemorative complex beautifully reflects Gandhi’s protest in the 1930s and ‘40s against British rule through non-violent protest, or satyagraha. Today, an eternal flame burns brightly in the centre of the site, a reminder of his important role in finally securing independence for the country in 1947.

India is the birthplace of four of the world’s major religions. Hinduism is the dominant belief system today, but through history other religions have tried to establish a foothold. The remarkable Qutub Minar – a 72.5m-high stone tower, built in the early 13th century – marked the start of two centuries of Islamic rule in the country. 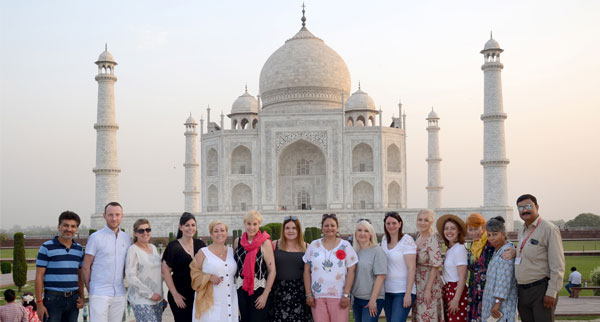 From Delhi, we travelled to Agra, 135 miles away. An escorted tour definitely helps maximise the time you have at each destination, offering the convenience of having transport ‘on tap’, rather than being a slave to the schedules of local transport.

We also did a fair amount of hotel-hopping over the 10-day trip and Aarti was always one step ahead, making sure our check-ins went smoothly. We were greeted with a refreshing wet towel and cold drink and were usually in our rooms within 10 minutes of arrival – a boon after a long day of sightseeing or travelling.

To make tipping easier, Aarti suggested we contribute a fixed amount and she divided it up into envelopes for us to take it in turns to tip – a simple plan that meant we weren’t constantly rummaging for rupees or agonising over the correct amount.

Agra has the honour of being home to the Taj Mahal, hailed as one of the wonders of the world and designated a Unesco World Heritage Site in 1983. Built between 1630 and 1652, the domed white‑marble mausoleum is a tribute of eternal love from Emperor Shah Jahan to his wife Mumtaz Mahal. Its ethereal beauty has inspired poets and writers through the ages, including Indian poet laureate Rabindranath Tagore, who described it as a ‘tear drop on the face of eternity’.

We had a guided tour as the sun came up, an exquisite time to see this architectural wonder. Semi-precious inlaid stones create a kaleidoscope of beautiful colours that drift over the facade as the light changes. 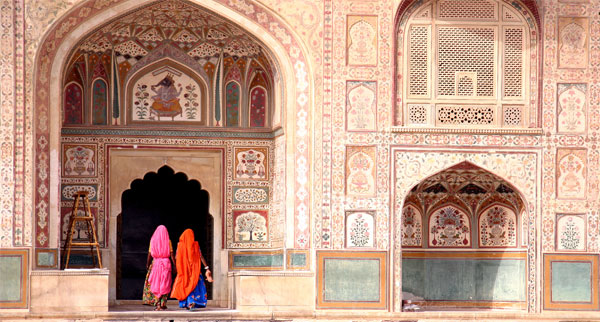 Our final stop was Jaipur, also known as the Pink City. High on a ridge overlooking the modern city is the stupendous Amber Fort, built during the reign of Mughal Emperor Akbar in the 17th century. A guide showed us around the remarkable complex, pointing out Ganesh Pol, a dramatic gateway adorned with beautiful depictions of Ganesh, the Hindu elephant-headed god, and the Sheesh Mahal, a room decorated with iridescent Venetian Murano glass that shimmers when the sun strikes.

In the evening, as temperatures cooled, we headed to the ancient bazaar. It’s a labyrinthine mix of every kind of shop, and the advantage of an escorted tour was highlighted again when Aarti accompanied those on a serious shopping mission.

Haggling for goods is an authentic part of the Indian experience and, with Aarti’s help, a couple of the women in the group secured a fair price for exquisite saris to take home. With their ornate decoration and glorious colour, it is a souvenir that will forever whisk them back to this most memorable corner of India. 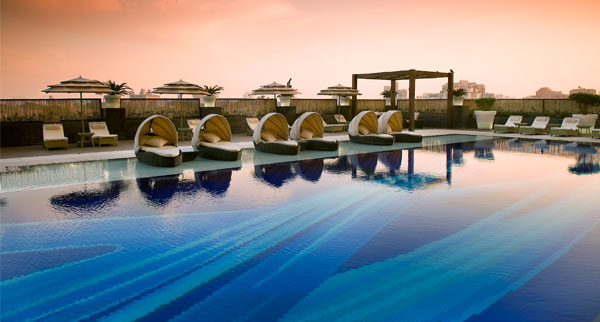 Agra: Taj Hotel and Convention Centre An infinity pool with views of the Taj Mahal is the highlight of this five-star hotel, whose 239 rooms and suites feature pared-back yet stylish decor. B&B rates from £62.
tajhotels.com 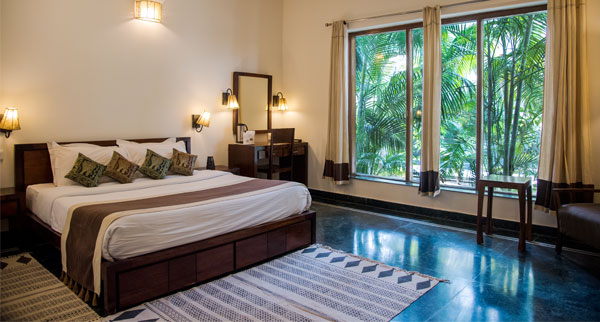 “The advantage of an escorted tour is that you get to see all of the best parts without having to waste time planning it yourself; plus, you are accompanied by a guide who can share their expert knowledge and keep you safe. I also love the social aspect and camaraderie of travelling with like-minded people.”
Michelle Stammers, travel consultant, travelgenius.blog

“India delivered more memories than I could have imagined. The Taj Mahal was a highlight, along with catching sight of four tigers in Ranthambore National Park. It’s a must-do trip.”
Ian Lewis, branch manager, Dragon Travel Agents

Saga Holidays’ 10-day The Golden Triangle and Tiger Trail starts at £1,599, including nine nights’ B&B in a hotel, nine breakfasts and dinners, VIP door-to-door travel service from anywhere on the UK mainland, air-conditioned coach and a dedicated Saga tour manager. Price includes optional travel insurance or a reduction if it’s not required. Departures from September 16.
sagaagents.co.uk