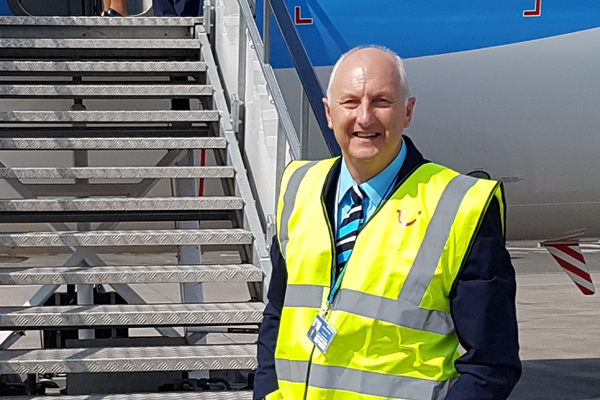 While many people in their sixties are considering retirement, Mark Heydon has just been appointed a job as cabin crew for Tui Airways.

The 62-year-old from Porthcawl in Wales said he was “thrilled and proud” to have earned his wings after deciding he wanted a career change.

He admitted to being slightly surprised to get an interview after believing he  may be too old when he applied for the role.

But the airline said Mark’s “outstanding people skills and passion for excellent customer service” made him the perfect candidate.

“The rest is history,” said Mark, who worked as an apprentice at Rolls-Royce in Bristol in the 1970s on aerospace engines.

Mark has since worked in a variety of roles including as a town planning officer for local government to helping unemployed adults get into the workplace and being responsible for child policies at Bridgend Family First.

In October last year, he decided he wanted to return to the aviation sector – but in a different role.

Mark and his family have also been travelling with Tui as customers since he was young.

Mark, who is now based out of Cardiff airport, said: “Tui always treated us like royalty so I’m really proud to now be part of a team that makes people so happy and gets their holidays off to a really great start. We want our customers’ holidays to begin the moment they step on board and we are lucky enough to make that happen.”

Tui cabin crew undergo six weeks of indepth training after making it through the application, interview and assessment centre, and receive their wings at a graduation ceremony.

Ian Campbell, director of customer delivery at Tui Airways,  said: “Age is absolutely not a boundary to becoming cabin crew with Tui Airways.

“Candidates need many key skills in order to gain their wings but most importantly a passion for delivering excellent customer service.

“Mark is a shining example of the fantastic crew we have in Cardiff and across the airline and we are really proud to have him in the team.”