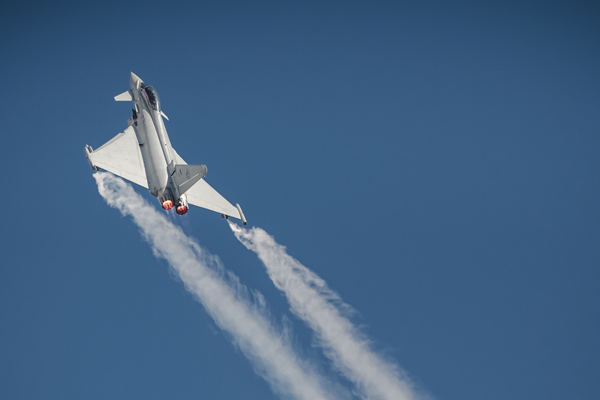 An apparent miscommunication between air traffic controllers and pilots reportedly led to two RAF fighter jets being scrambled to escort a Jet2 flight.

The aircraft, which left Stansted on Saturday evening, was flying to Turkey when there was allegedly disruptive behaviour from a female passenger on board.

The flight to Dalaman in was subsequently diverted back to the Essex airport.

The incident was communicated to air traffic control.

However, the Jet2 pilot was then overheard saying: “Flight deck secure, cockpit door not compromised.”

It appears that the Jet2 crew were hoping to reassure air traffic controllers.

But air traffic controllers apparently interpreted that phrase to mean that someone had attempted to gain access to the cockpit during the flight.

In reality that was not the case but it was enough for air traffic controllers to alert their military counterparts, the BBC reported.

Two RAF Typhoon fighters were airborne within a matter of minutes.

The new explanation as to why the two fighter jets were scrambled came from a pilot on board another aircraft in the vicinity of Stansted.

He overheard the entire conversation between the Jet2 crew and air traffic controllers and spoke to the BBC anonymously because he was not authorised to do so by his airline.

The situation was “totally over-dramatised” because of a “miscommunication”, he claimed.

The incident caused minor delays to other flights because other aircraft had to circle the airport while waiting for permission to land.

The RAF Typhoons, which escorted the Jet2 aircraft back into Stansted, caused a sonic boom.

Jet2 has not commented on the latest explanation, nor has NATS, the company in charge of air traffic control at Stansted.

The Ministry of Defence said it never discusses the detail of operational missions.

The 25-year-old woman who was arrested at Stansted on suspicion of common assault, criminal damage and endangering an aircraft, was released on bail.

Jet2 has claimed that the woman had attempted “to open the aircraft doors during the flight”.

Jet2 clarified that there was no attempt by anyone to access the cockpit.

The airline said the incident highlighted “just how serious the consequences of disruptive passenger behaviour can be”.