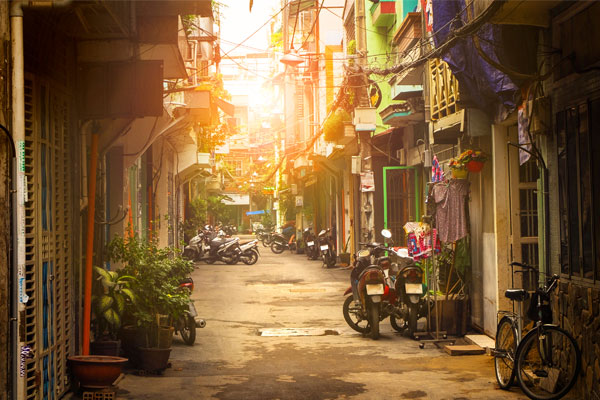 Change is afoot in Ho Chi Minh City. Whether it’s the shiny new, observation deck-topped Landmark 81 skyscraper or the constant hum of construction on the city’s first metro system, Vietnam’s southern city merits a few days of anyone’s time – even  if they think they’ve already seen all it has to offer.

If your clients are flying in to Ho Chi Minh City to embark on a tour around the country, here’s how they should spend their first 48 hours. 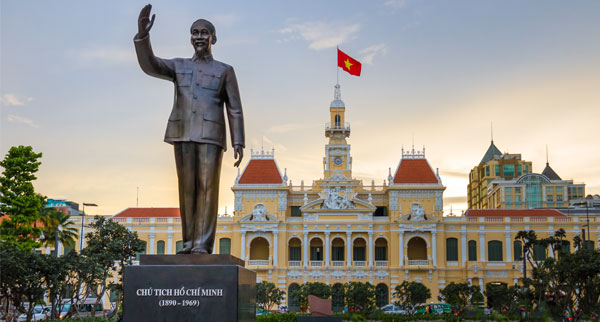 09.00: Blow away any jet lag-induced cobwebs with a wander over to Nguyen Hue street, where you’ll find a 24ft statue of Ho Chi Minh. It was installed in 2015 and is almost twice the size of the original, which depicted the former president of North Vietnam sitting down. It’s framed against one of the city’s most famous landmarks – the People’s Committee building. Built in 1901, this lemon-yellow architectural gem is at its finest after dark, when it’s spectacularly illuminated.

11.00: Continue the history lesson at the Reunification Palace, with its impossibly grand entrance, which North Vietnamese tanks crashed through in 1975. The time capsule-like interior is the reason this is the city’s biggest tourist attraction. There are five levels to explore – highlights include its underground command centres, with the  original maps on the walls,  and various artefacts, including  the Mercedes-Benz once used by president Thieu.

13.00: Time for some lunch. Thought Vietnamese food was all about pho and frogs’ legs? Think again. The banh mi is a delicious, pork-stuffed baguette that dates back to the 17th century, when French missionaries arrived in Vietnam – armed with baguettes. The French left in 1954, and the Vietnamese put their stamp on the sandwich by adding chilli and pickled vegetables. Le Méridien hotel’s Bamboo Chic restaurant does a posh one made with Iberico ham, but we also recommend Lê Thi Rieng street’s Banh Mi Huynh Hoa, a local hotspot where you’ll pay 80p for a hot, fresh banh mi. Watching the army of workers filling the baguettes with lightning-quick movements is part of the fun.

15.00: Ho Chi Minh City is expanding at a rate of knots, and to gain a breathtaking perspective on its sprawl, head to Landmark 81 – Vietnam’s tallest skyscraper – where the SkyView observatory deck opened this year. The observatory covers floors 79 to 81. It’s incredibly interactive, with virtual-reality games and, on the 81st floor, an open-air area known as SkyTouch. You’ll need (in addition to a head for heights) to don a harness to access this area.

16.00: Back on ground level, wander over to the Notre-Dame Cathedral Basilica of Saigon, built in the late 19th century by French colonists and awarded cathedral status by the Vatican in 1962. This deep red, neo-Romanesque building was made with bricks from Marseille, and its highlights include hand-carved tablets and the original stained-glass windows.

18.00: Gain a different view of the city with the recently launched Saigon Sensation dinner cruise. The extensive menu features a wide range of dishes, though the grilled crayfish with salted egg sauce and garlic fried rice is a particular highlight. Nab a table on the open-air main deck, or upgrade to a private dining room for a more intimate experience.

20:00: Toast Ho Chi Minh with a drink at the Ben Thanh Street Food Market, a popular hangout for both locals and tourists. Its wide range of delicious (and ridiculously cheap) food is guaranteed to get your tummy rumbling, but why not start with a pre-dinner drink at the tiny Fix It bar, where the speciality is the banh mi – a gin-based cocktail inspired by Ho Chi Minh City’s famous sandwich. It’s garnished with cucumber – a key ingredient in the banh mi sandwich – and the addition of chilli gives it a lip-tingling kick of spice. Sounds weird, but it works. 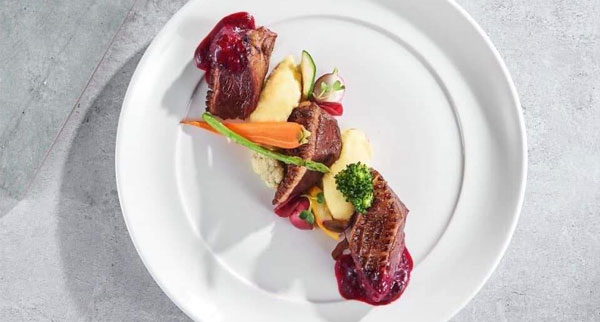 9.00: An absolute must-see for anyone interested in Vietnam’s history are the Cu Chi Tunnels on the outskirts of the city, but if you’re short on time, the city-centre War Remnants Museum provides a detailed – and incredibly harrowing – insight into the city’s darkest days. There’s an abundance of military hardware, including an American fighter plane in front of the museum, and hundreds of photographs inside focus on everything from American war crimes in Vietnam to the effects of the Agent Orange defoliant.

11.00: Decompress with a wander around Ho Chi Minh City’s Chinatown. The easiest way to get there from the city centre is via Grab, Vietnam’s version of Uber. The Thien Hau Temple, also known as the Ba Thien Hau Pagoda, built in 1760, is a Buddhist temple dedicated to the Chinese sea goddess, Mazu. It’s one of Vietnam’s most beautiful temples – the curving roof is adorned with delicate porcelain figures representing various Chinese legends, and there are enormous incense burners and beautiful dioramas. From the temple, it’s a short walk to Binh Tay Market, built by the French in the late 19th century. It’s enormous, chaotic and colourful, and there’s little you can’t buy here. 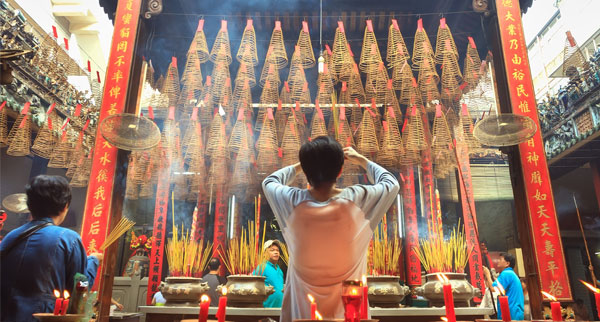 14.00: Head back to the city centre – more specifically, Anan, a restaurant on Ton That Dam street. Vietnamese owner and head chef Peter Cuong Franklin is a former investment banker with a serious passion for local cuisine. The restaurant’s famous for its $100 banh mi (it’s made with foie gras and truffle-infused mayonnaise) but there’s no shortage of more-affordable fare, such as the delicious banh xeo tacos, made with prawns and peanut sauce, and ginger mushroom fried rice.

16.00: Visit the city-centre Southern Women’s Museum – one of the city’s lesser-known attractions – to gain a fascinating insight into the accomplishments of Vietnamese women. The carefully curated collections of exhibits, which have signage in both English and French, focus on everything from traditional women’s dress to the role of women in the American and French wars and the formation of the Vietnam Women’s Union Assembly.

17.00: Wander over to the Golden Dragon Water Puppet Theatre on Nguyen Thi Minh Khai Street. Water puppetry is one of Vietnam’s oldest art forms, and has its origins in the rice paddies of the country’s north. Musicians hidden out of sight provide the sound effects while fairies, animals and mythical creatures spin across the stage. Performances take place daily at 5pm and 6.30pm.

18.00: Bid farewell to Ho Chi Minh City with a pre-dinner drink at the Caravelle Saigon, one of its most famous hotels. This was the base for war reporters during the Vietnam war. After the fall of Saigon in 1975, it was renamed the Doc Lap (meaning ‘independence’) but became the Caravelle once more in 1998.

20:00: Finish your visit with dinner at the beautiful 245-room Park Hyatt Saigon, inside one of the city’s most spectacular buildings. The menu at the Square One restaurant features a huge selection of Vietnamese and French classics, from wagyu beef pho to steak tartare with egg yolk sauce. 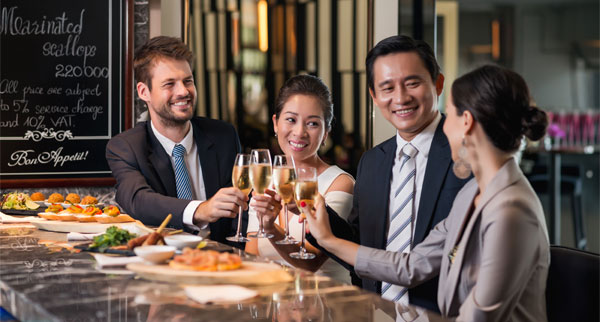 “Ho Chi Minh City played an important role during the Vietnam war and the Cu Chi Tunnels and War Remnants Museum are must-sees. However, the city also has an elegance and charm that delight all who visit. The French colonial influences are strong – it even has its own Notre-Dame Cathedral, made entirely of materials imported from France.”
Kashka Lantis, product manager, Exodus Travels

“Ho Chi Minh City is bustling and vibrant, with some of the tastiest street food in the world. It brims with personality, and has some of southeast Asia’s friendliest people.”
Linh Farid, senior product manager, Wendy Wu Tours

Exodus Travels offers a 16-day Vietnam Adventure that includes a walking tour of Ho Chi Minh City, a visit to the Cu Chi Tunnels and free time in the city, along with tours of Hanoi, Halong Bay, Hue, Hoi An and the Mekong Delta. Prices start at £1,840, including flights.
exodus.co.uk

Wendy Wu Tours offers a 17-day Angkor to the Bay package that spends three nights in Ho Chi Minh City, en route from Cambodia – where highlights include Siem Reap, Angkor Wat and Phnom Penh – to Hoi An, Hue, Hanoi and Halong Bay. The tour costs from £3,040 including flights from the UK, accommodation in four-star hotels, all meals and visa fees.
wendywutours.co.uk