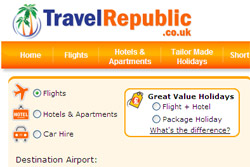 The CAA’s appeal against the not-guilty verdict in the Travel Republic case was rejected by Lord Justice Elias, who backed the magistrates court’s ruling that the online agency was not selling packages and not required to have an Atol.

Speaking to Travel Weekly, Pirie said he hoped the judgment would signal an end to the dispute and revealed he was looking forward to “normalising relations” with the authority.

“I want to develop a positive working relationship with the CAA going forward,” he said.

“We want to thank all our customers, employees and trade partners for all their support right from the start of this process up until today.”

The CAA dropped its appeal in relation to Pirie earlier this year, instead focusing on the travel agency itself.

Pirie was cleared of all charges at Westminster Magistrates Court last November.

Following the appeal, industry bosses urged the CAA to drop its pursuit of Travel Republic, condemning its decision to ask the Supreme Court to examine the case.

They urged it to focus instead on the Department for Transport’s (DfT) Atol reform.

Alan Bowen, legal adviser to the Association of Atol Companies, said: “Having lost twice, it is time for the CAA to take alternative steps to close the loophole. There is no point in bashing their heads against a brick wall.

“We need to see the CAA take urgent action to bring forward the proposals in the consultation paper.”

Abta chairman John McEwan said the disruption caused by the ash cloud from Iceland may have caused the DfT to have a rethink. “The DfT consultation will come up with some recommendations to the government although I suspect the ash cloud situation has caused some extra thinking about how we deal with that in the future.”

The CAA’s failure in the case also prompted predictions that firms would look to reduce their Atol business, but there were warnings other firms may be investigated.

The Co-operative Travel managing director Mike Greenacre said: “We will continue to use Atol for the time being, although we must now give careful thought to our competitive position set against the reputation of our brand.”

Classic Collection Holidays managing director Nick Munday said: “The likely scenario is more and more businesses will try to take themselves out of bonding, so bonding for traditional operators could go up and up.”

In 2008 the CAA said it had a “hit list” of 10 major companies it believed were operating illegally without licences.

A source close to the Travel Republic case said: “[The] judgment applies only to Travel Republic so if other companies think this means they are off the hook and have carte blanche to operate how they like, they should think again.”