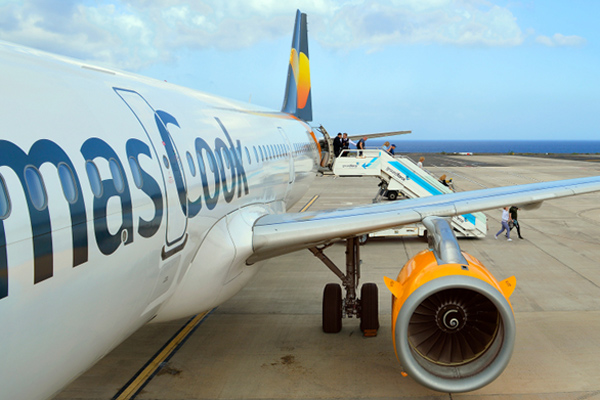 Scare stories will continue up to the point the deal is done or Thomas Cook goes under, says Ian Taylor

The last days of September were always going to prove the dog days of summer for Thomas Cook. Is the group going to fail as the media frenzy suggests? Quite possibly, though hopefully not.

The reality is Thomas Cook has faced only two possible outcomes – a deal or collapse – since May, and deal-or-bust scenarios typically go to the wire.

That reality is now painfully clear.

More: Government urged to prevent banks from pushing Thomas Cook over the edge

Friday’s media feeding frenzy, triggered by a Sky News story, may have tipped the odds nearer to bust. But whereas earlier in the summer this could have proved self-fulfilling by causing bookings to dry up, now the group’s summer holidays are largely sold.

The answer is yes – if they bought a flight and accommodation. If the worst happens the CAA will have arrangements in place to bring people home at the end of their holiday.

Reports that the CAA has, indeed, drawn up contingency plans to repatriate passengers have been presented as confirmation a collapse may be imminent. But it would be a remarkable dereliction of duty if the CAA had not done this.

The position of flight-only customers is less clear, but should they choose not to fly they lose their money. If they paid by credit card, and probably if they paid by debit card, they can expect to be reimbursed if the worst happens.

I don’t put great store by this. Thomas Cook would be unlikely to sell its interests in Europe’s third-biggest market where it is the number-one in market share.

This would throw the deal with Fosun up in the air and dilute the collateral – the 75% share in the airline and 25% of the tour operator – the banks and bondholders are due to receive for writing off Thomas Cook’s debt and putting in fresh capital.

Thomas Cook confirmed in the summer that it had received an offer for its businesses in Norway, Sweden, Finland and Denmark from private equity firm Triton Partners.

Triton is assembling a pan-European business after entering the travel sector in February when it acquired Netherlands-based online travel group Sunweb.

It has since added Benelux tour operator Corenden Holiday Group, giving it a combined turnover of €1.15 billion and 1.75 million customers. Thomas Cook’s Scandinavian operations would make it a serious second-tier player in Europe.

Thomas Cook might have been exploring a possible plan B this week if the deal with the banks, bondholders and Fosun falls through, but it’s difficult to see there being time to forge any serious alternative.

Thomas Cook largely has a rescue deal in place or did until this week. This would see Thomas Cook recapitalised to the tune of £900 million.

Chinese group Fosun would put in £450 million and Thomas Cook’s “core lending banks and noteholders” [bondholders] put in another £450 million as well as converting the debts they hold to equity.

Fosun would acquire “at least” 75% of the group tour operator and 25% of the airline. The debt held by the banks would be converted into “approximately 75%” of equity in the airline and “up to 25% of equity” in the tour operator.

Two flies landed in this ointment this week.

The first saw some bondholders threaten to resist the deal – and Thomas Cook needs holders of 75% of its bonds to agree the rescue.

Those bondholders balking were largely US hedge funds which bought into the bonds hoping to make a killing from Thomas Cook’s collapse.

They stand to see pay outs on the credit default swaps (CDSs) they have made to re-bundle the group’s debt in the event of bankruptcy and fear the way the deal is structured would see them lose out on these payments.

It was to address their concerns that Thomas Cook postponed a planned meeting with bondholders this week until September 27 and filed for Chapter 11 bankruptcy protection in the US.

Chapter 11 should be enough to ensure the hedge funds are paid out by what is called the CDS market determination committee.

If Thomas Cook fails because these bondholders oppose the deal it will have been brought down by the financial markets – and in a situation in which debt instruments such as CDSs are running at levels not seen since the financial collapse of 2008.

However, the second fly in the ointment is possibly more damaging and more difficult to swat.

Early this week, Royal Bank of Scotland and Lloyds told Thomas Cook they want an additional £200 million standby facility in place, having received a financial advice that the group could run out of cash again by November 2020.

Media reports that Thomas Cook now has just “a matter of days” to secure this financing are merely repeating what we already knew. The deal must be done by October.

A large part of the cost of its collapse and subsequent repatriation of passengers would be likely – if the Monarch collapse is anything to go by – to fall on taxpayers.

Travel Weekly has consistently pointed out that Thomas Cook could fail come October.

In May, we reported: “Thomas Cook’s disastrous half-year results put the group’s continued trading in jeopardy. Thomas Cook has until the end of September to get its ducks in a row.”

We also noted: “Thomas Cook’s woes can take on a life of their own.” That is what is happening now.

In July, Travel Weekly warned Thomas Cook is “poised to go out of business in October without . . . agreement on the recapitalisation and injection of new money.”

In August, we warned again: “Thomas Cook requires £2.5 billion to survive and sign off on it before the end of September.”

That is where we are.

Travel Weekly also noted in August: “News that Thomas Cook requires still more capital does not boost confidence.” Indeed, it does not. The odds of Cook failing have risen.

Deal could still be on

Scare stories will continue up to the point the deal is done or Thomas  Cook goes under.

The odds on the deal completing have fallen, but there are two significant reasons why Thomas Cook could still pull it off.

First, Thomas Cook’s creditor banks and bondholders are owed £1.6 billion. They will not get this back whether the deal completes or Thomas Cook folds.

Should Thomas Cook go under, the most the banks will realise of the £875 million they are owed is about £115 million, according to documents filed in court last month.

Let’s assume the bondholders see a similar proportion of their debt repaid – it would total £211 million of the £1.6 billion.

They will intend to sell the airline down the line. Thomas Cook was hoping to get about £800 million for its carriers in May. That was over optimistic in a market in which there is too much airline capacity.

But the most conservative estimate by analysts was that, even if broken up, the airlines could fetch more than £600 million and together perhaps £1 billion plus.

The banks might realistically hope to realise such an amount in two to three years. Even 75% of the lower value would be £450 million.

The banks and bondholders would also expect to realise something from their minority stake in the rest of the group. Fosun might buy them out, bring in another investor or list the group partially once more.

Thomas Cook is worthless now, with its shares priced around 3p, but its shares were worth £1.20 and above 18 months ago. They tumbled due to successive disappointing results and the group’s debt burden.

Since May, the shares have been junk given the alternatives of bankruptcy or a shareholder wipe-out, making the current value an irrelevance.

But shorn of debt Thomas Cook could prove attractive to investors, allowing the banks to recoup more of their money.

Let’s say Thomas Cook’s market value returns to just one third of what it was when Fosun first acquired a stake. It would be valued at close to £1 billion, making the banks’ 25% stake worth potentially £250 million.

An attractive deal for Fosun

A second reason is that this is a rather good deal for Fosun. The Chinese group will commit £450 million for a Thomas Cook group free of debt.

Thomas Cook may have a market cap of £69 million now, but it was valued at 33 times that 18 months ago.

When Fosun first acquired a stake four years ago, it paid 145 pence a share, valuing Thomas  Cook at about £2.75 billion. It would pay a fraction of that now.

The cost of the deal will appear relatively minor to Fosun which has considerable assets and spent $38 billion on acquisitions in a recent six-year period.

Fosun can expect Thomas Cook to complement the Club Med business it acquired in 2015 and look to use its name around the world.

The group has a huge home market to draw on to add to Thomas Cook’s existing 22 million customers in Europe, and without £1.6 billion in debt to service Cook could finally make a profit.

So Fosun has reason enough to want the deal completed.

Thomas Cook could still fold despite these two compelling reasons.

Bondholders’ objections can probably be surmounted but could nonetheless prove fatal. However, it’s the repeated raising of the figure Thomas Cook needs to continue trading that has the group on life support.

It is staggering how much this amount has swollen. When Thomas Cook first indicated it was in trouble in February with the announcement that its airline was up for sale, chief executive Peter Fankhauser insisted:

“I want to underline we have a healthy liquidity. This is a strong business.” Really?

The cardiac monitor is beeping still, but only an additional £200-million credit facility will see the group through to October.

It would be a great shame if the rescue floundered at the final hour, but it could happen.

Fosun chief Guo Guangchang styles himself the ‘Warren Buffet of China’ – Buffet being the US billionaire investor often referred to as “the sage of Omaha”.

More: Government urged to prevent banks from pushing Thomas Cook over the edge