• Teletext Holidays signed a deal with Tesco to open 20 retail outlets in the next two years, while consortia reviewed their commercial relationships with non Abta bedbanks, following a vote to make Abta suppliers liable if a retailer fails.

• Owners of The World, the cruise ship owned by its residents, was in talks with
UK agents to persuade them to sell more of its guest bed nights. 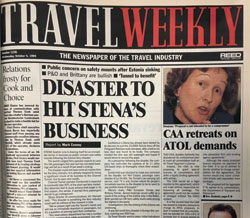 • Stena Sealink Line was bracing itself for a slump in business as public concern over safety mounted following the Estonia ferry disaster. It was a bad time for the sector, with operators resigned to losing business to the Channel Tunnel, due to open the following month.

• First Choice severed lines of communication with partner Thomas Cook amid fears the retailer’s German parent Westdeutsche Landesbank was about to make a hostile bid for the operator.

• The Civil Aviation Authority ditched a controversial plan for consolidators to hold an Atol. Instead, it proposed special licences that struck legally binding agreements with airlines.

• Five Co-operative societies stepped up their fight against the vertically integrated companies by bringing out an expanded range of own-label brochures and forming a separate company, Co-op Travel, to handle negotiations with suppliers. 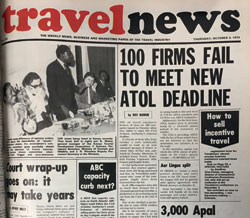 • Close to 100 companies’ Atols lapsed when they failed to meet the Civil Aviation Authority’s deadline. The list included Kuoni Travel, Wakefield Fortune, Yugotours, Alta, Frames and Rankin Kuhn. In all, 189 were due to renew for the next year. In most cases, companies failed to supply the CAA with up-to-date financial information or struggled to raise bonds to the new level of 7.5% for Abta members and 12.5% for non-Abta companies, according to Travelnews.

• Meanwhile, it was suggested the collection of money still owed to failed holiday firms by agents following Court Line’s demise could take years.