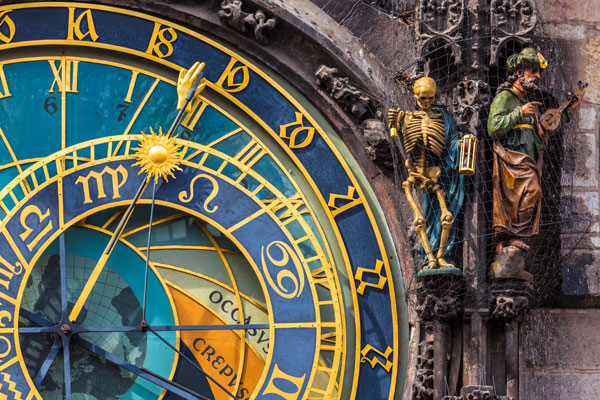 David Whitley ventures beyond the Charles Bridge to see what really makes the City of a Hundred Spires tick.

Why go? The Old Town tends to heave with visitors, but the people are there for good reason. It dates back to around the 9th century, and the system of haphazard laneways really hasn’t had much straightening out since. The medieval maze comes with some rather special Gothic and baroque architecture thrown into the mix, while the main square is one of the most spectacular in Europe. This is where you can find the Old Town Hall – the cellars and chapel inside are open to visitors, and the Astronomical Clock with its moving figurines attracts massive crowds. Elsewhere in Stare Mesto, handsome houses host restaurants and pretty churches are full of arts and treasures, while several weird little museums cover everything from Apple computers to alchemy.

What to do: Art lovers have two strong choices – the Convent of St Agnes is an excellent bet for medieval art, while Národní Galerie Praha inside the Palác Kinských has both modern conceptual pieces and Renaissance heavyweights. But perhaps the most interesting quarter of Stare Mesto is Josefov, the former Jewish ghetto. Many of the historic Jewish buildings have been preserved and brought together under the banner of the Jewish Museum. These include four richly decorated synagogues, a Ceremonial Hall and the old Jewish cemetery. Most have exhibitions inside, and guided tours are available through Insight Cities, which charges around £52 per person for a three-hour, scholar-led walk. 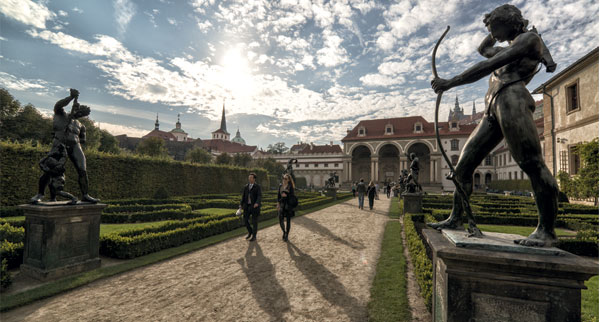 Why go? Getting there is part of the fun. Across the Vltava River from Stare Mesto, Malá Strana is reached via the ornamental, statue-dotted Charles Bridge. Once at the other side it is thronging with tourists along the admittedly pretty main streets, but dive off the main track and you’ll find gorgeous walled gardens, converted monasteries, lavish embassies and handsome palaces.

What to do: The Karel Zeman Museum is an unexpected treat, focusing on early movie special effects, while the Kafka Museum is just as disconcerting as the books of the author it honours. But Malá Strana is made for mooching. Kampa Island offers parks, boat trips and weird baby sculptures, while the Wallenstein Gardens are one of several that make for a blissful escape.

3 of the best day trips from Prague

• Cesky Krumlov: Cesky Krumlov, in southern Bohemia, is one of the most beautiful towns on earth. Built around a loop of the River Vltava, it is topped by a fairy-tale-worthy painted Renaissance castle, while the rest is cobbled streets of cuteness and frothing beer on riverside terraces. Isango sells a full-day trip starting at £72.

• Kutna Hora: This quirky 13th-century silver mining town has plenty of history to it and a fab medieval cathedral, but the real reason to visit is the Sedlec Ossuary. This incredibly creepy chapel is made with thousands of human bones, stacked up and arranged as decoration. Viator sells six-hour trips from Prague for £41.

• Terezin: During the Second World War, this former military fortress was used by the Nazis as a concentration camp for Jews. It was something of a show camp, with token educational and cultural efforts made in a bid to show the camps weren’t so bad. But almost all the Jews who arrived in Terezin were later sent to the death camps. Isango sells six-hour round trips for around £52.

Why go? This hilltop district is dominated by the Hrad – the largest castle on earth – although go beyond it and there are some less busy sights to check out. The Černín Palace is a stout behemoth that’s closed to the public, but offers access to its tranquil formal gardens, and the Loreta pilgrimage complex opposite is a contrastingly dainty baroque effort.

What to do: The Hrad is essentially a small town in its own right. Highlights include the magnificent Gothic St Vitus’ Cathedral, the Imperial Mausoleum, the cutesy alleyway known as the Golden Lane and the enormous Vladislav Hall – so big, jousting tournaments used to be held there. Do Something Different sells a guided Prague Castle walking tour, which goes into a bit more detail about the key areas than you’d get going alone, for £44.

Why go? Karlin is the antidote for when the better-known areas of the city seem overrun. The riverside neighbourhood took a beating in the 2002 floods, but the subsequent rejuvenation has been hugely impressive. The eye-catching River City complex is full of striking modern architecture, while elsewhere, there’s a heavy concentration of art nouveau buildings.

What to do: Karlin is a great area for grazing – several good quality bars and restaurants have opened up – but it’s also a place where locals genuinely hang out. Kasárna Karlin – a former barracks-turned-cultural centre with galleries, outdoor movie screenings and beach volleyball – is the coolest example of this. The twin-spired, rose-windowed Church of Sts Cyril and Methodius is an absolute beauty, too. 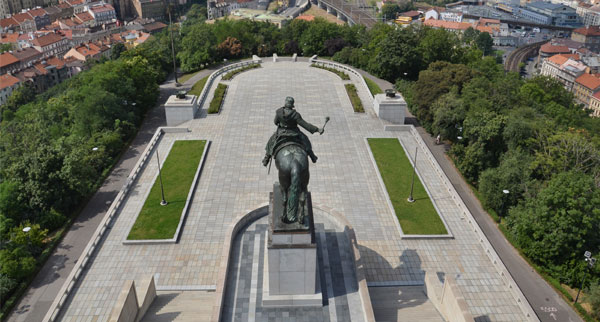 Why go? Regularly billed as Prague’s Montmartre, Žižkov manages to be both no-nonsense and quirky. The bar scene here is plenty of fun, with many having gimmicks (such as Scalextric sets or vintage arcade games) without dipping into pretentiousness. The Vítkov Hill, with its memorials and statues, offers a mighty fine vantage point.

What to do: If you want to explore the bars, then Viator sells a half-day Prague Žižkov Alternative tour for around £50, which covers the district’s history and character as well as its drinking dens. Alternatively, the stylishly brutalist TV tower is one of Prague’s icons. There’s an observation deck with superb city views and an open-air theatre outside. Look for the bizarre sculptures of babies clambering the outside of tower, too. 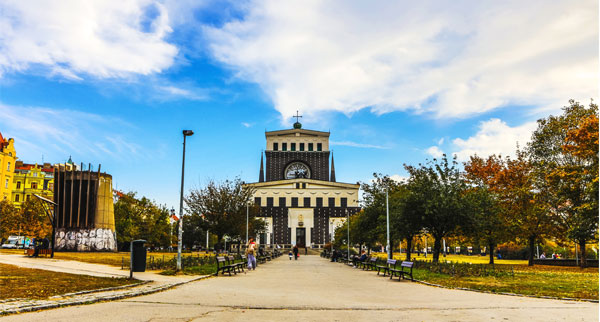 Why go? Much quieter than the centre, but still boasting plenty of magnificent architecture – neo-gothic, baroque revival and renaissance pastiche can be found within a few metres of each other – Vinohrady is where Prague’s well-heeled live. That makes for a lot of good eating and a thriving coffee bar scene. It’s directly south of Žižkov, and the two neighbourhoods make for an interesting contrast.

What to do: Vinohrady is an excellent place for just wandering round and admiring the details of the buildings, but if you’re after specific targets, then the Church of the Most Sacred Heart is a bizarre masterpiece, with a giant circular clock and what looks, from a distance, like armour plating. For a view out over the city centre, wander towards the Rieger Gardens, or in the winter months, take a stroll around its pretty Christmas market.

Hotel Amadeus: This highly affordable option in Žižkov has a few quirky touches on the way in. The entrance corridor is dotted with wine corks, while niches in the staircase have been filled with bird cages and little plastic birds. The rooms are clean, comfortable and equipped with essentials such as kettles and fridges – but it’s fans instead of aircon. Rooms cost from £32.
amadeushotel.cz

The Golden Key: On the busiest route through Malá Strana, this recently renovated joint goes in for lots of loving little features – free biscotti in the lobby, antique-look furniture in the rooms, a hidden courtyard with dangling egg-shaped chairs. The attic rooms with original wooden beams have immense character. Rooms cost from £74.
goldenkey.astenhotels.com

Le Palais: A vision of Vinohrady grandeur, Le Palais gets a regular stream of locals popping in for spa treatments. The vibe is of belle époque comfortable refinement, there’s a sizeable art collection and bathrooms come with heated floors. Rooms cost from £142.
lepalaishotel.eu