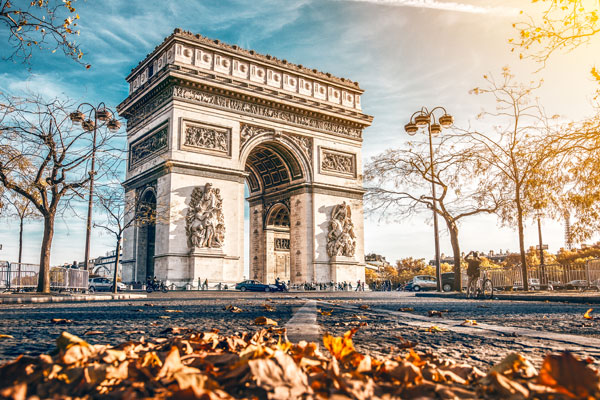 “Every day I go to work is a love story,” says our Parisian guide, Nicole, as we stroll along the Champs-Élysées, the grand Arc de Triomphe looming in the distance as we put our collars up against the chill in the air.

“Because of the people or the place?” I ask. “Both! I always say people should visit Paris at night. Paris is the city of light, and at night, everything is lit up.”

As evening draws in and crisp day turns into rather nippy night-time, I see what she means. Spotlights pick out the intricate details in the arch’s sculptured frieze, the warm lights of famous French bakery Ladurée shine out invitingly into the night, and just around the corner, the huge flagship of fashion giant Dior is emblazoned with neon-lit sayings across its impressive facade. “Dance and redefine what is beautiful,” says one.

There’s never a bad time to be in Paris, but skipping the summer crowds and coming here in the shoulder seasons, when Parisians are back from their south-of-France sojourns and the streets thrum with activity day and night, feels more like the ‘real’ city than the tourist version, making it a good idea for clients keen to squeeze in a city break this side of Christmas.

One place to start is Le Marais, a maze of twisting, narrow streets where tiny falafel carts sit side-by-side with high fashion boutiques, where diners spill out of pavement cafes and Jewish bakeries and bookshops rub shoulders with hipster stores proudly displaying the rainbow flag.

The Rue des Rosiers is at the heart of the Jewish quarter, once home to small family-owned delis and still boasting the best falafel in town (at L’As du Fallafel, if clients want to test it).

Most locals bemoan the fact that many of its oldest residents have been crowded out by mainstream brands; the sight of clothes shop Cos behind the original façade of the Hammam Saint-Paul is somewhat jarring.

Yet a stroll through this neighbourhood, stopping for pitta at popular joint Miznon or to watch locals practising tai chi in the tranquil Place des Vosges – the city’s oldest square and one-time haunt of royals and aristocrats – still feels like a link with Paris’s past.

In fact, this area is as close as you’ll get to the look and feel of pre-19th-century Paris. Le Marais was one of few to escape the sweeping renovation of the city by architect Georges-Eugène Haussmann, under the direction of then-emperor Napoleon III.

In just 17 years, from 1853 to 1870, three-quarters of the city was torn down and rebuilt, creating the wide boulevards, leafy avenues and manicured gardens for which Paris is now the envy of the world. Nearly 200 miles of roads and 350 miles of sewers were built in an effort to improve the city’s public health and – cynics might add – to get rid of the narrow streets and tucked-away meeting places where protest could foment.

Though Haussmann was dismissed in 1870, his project lived on well into the 1920s, and back in the eighth arrondissement – home of the Champs-Elysées and Place de la Concorde – his signature can be seen in the uniform façades of its six-storey buildings, a far cry from the jumble of architectural styles in Le Marais.

Art deco hotel the Grand Powers exhibits all the hallmarks of Haussmann, from wrought-iron balconies to high ceilings, and has retained its original 1920 fireplaces and mirrors in a sympathetic restoration of its former glory. 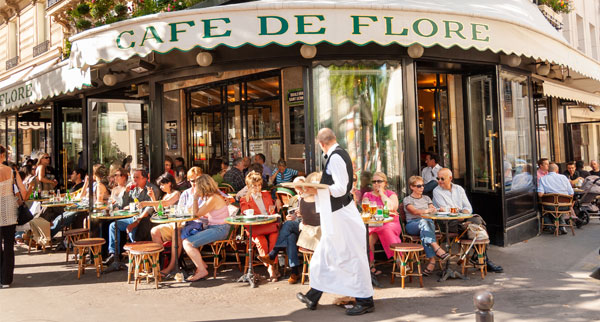 The likes of Jean-Paul Sartre, Simone de Beauvoir and Albert Camus could frequently be found at the Café de Flore or Les Deux Magots, which sit in the shadow of the 15th-century Abbey of Saint-Germain-des-Prés.

These days, the area is an interesting jumble of high-end homewares and antiques shops, art galleries alongside indulgent chocolatiers and shops stacked with row upon row of pastel-hued macarons. If clients are looking for foodie souvenirs, Tomat’s épicerie stocks a tempting array of everything from foie gras to French mustard, and lets customers try before they buy. For a sweeter treat, Maison le Roux is an Aladdin’s cave of chocolates and caramels – including the silky-smooth signature salted butter caramel – while nearby Macarons Gourmands displays every conceivable flavour of Paris’s prettiest dessert, offering a colourful way to brighten up a brisk autumn day, and the perfect end to a short break in the city of lights. 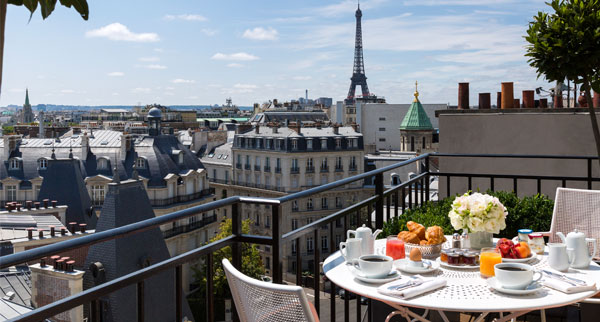 Grand Powers: This 100-year-old hotel in the heart of the Golden Triangle has emerged from its refurbishment looking more elegant than ever – all high ceilings, decorative mouldings, rich fabrics and muted decor in celadon green, dusky rose or ice blue. Expect original artworks, Diptyque amenities and a Turkish bath and spa.
Book it: Rooms start at £369.

Grand Hotel du Palais Royal: Highlights include a white marble lobby, original staircase and luxurious hammam. Its 68 rooms are decorated in a palette of pastels, some with views of the Sacré-Cœur and Palais Royal, and even the Eiffel Tower if clients splash out on the Suite Palais Royal.
Book it: Rooms start at £358.

Hotel San Regis: Managed by sisters Zena and Sara, this hotel (below) has a home-from-home feel, with 42 elegant rooms dotted with artworks and antiques.
Book it: Rooms are from £414. All hotels are part of Small Luxury Hotels of the World. Prices are per room per night and include breakfast.
slh.com

A Private Tour of Le Marais can be booked through Viator, from £170 for four. A food tour of Saint-Germain-des-Prés starts at £80 booked via the concierge in the hotels from Small Luxury Hotels of the World.
viator.com
slh.com

Exploring historic Toulouse in southern France
Northern France: Sailing the River Somme
Top things to see and do in Corsica