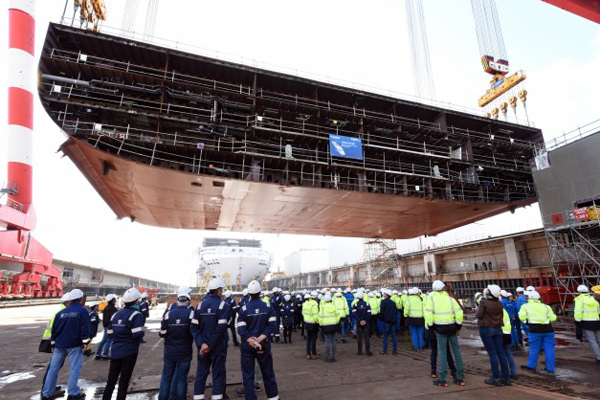 Royal Caribbean International has revealed its next Oasis-class vessel will be called Wonder of the Seas and will based in Shanghai.

The line claims the ship will be the largest in the world when it launches in 2021 and will have the seven-neighbourhood concept which its sister vessels have.

Michael Bayley, the line’s president and chief executive, said: “Royal Caribbean is known for its innovation and constantly pushing the boundaries of what’s possible and an Oasis-class ship in China is proof of that.

“Wonder of the Seas will redefine the ultimate vacation and be revolutionary.”

Today (October 10), the ship’s keel was lifted into a building dock to mark the beginning of the construction process at Chantiers de l’Atlantique in Saint Nazaire, France.

Royal agreed a deal with the shipyard earlier this year for a sixth Oasis-class vessel, due to launch in 2023.

The line’s first Quantum Ultra ship – Spectrum of the Seas – was deployed in China after its launch earlier this year.