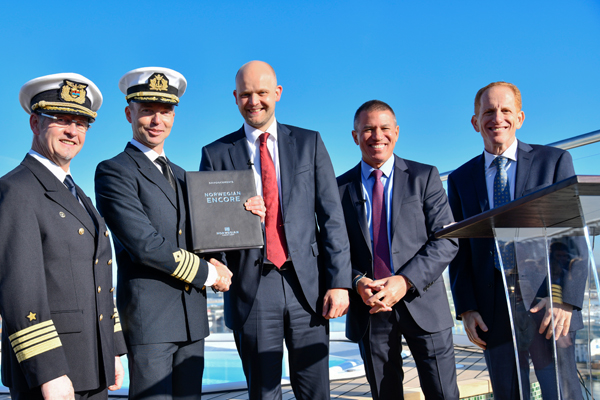 The 3,998-passenger vessel will now embark on a month-long tour of preview events across Europe, New York and Miami.

These include a two-day preview sailing to arrive in Southampton on Saturday and the ship’s naming ceremony on November 21.

Singer and TV host Kelly Clarkson will perform at the naming in Miami as the ship’s godmother.

Modern Italian restaurant Onda by Scarpetta, expanded virtual reality space Galaxy Pavilion and the largest open-air race track at sea are some of the onboard features.

More: NCL in ‘much better’ position after sales promotions shake-up

Theatre production Kinky Boots will also be part of the entertainment programme.

Norwegian Encore is the first ship in the NCL fleet to eliminate single-use plastic bottles.

Speaking at the delivery on Wednesday, Andy Stuart (pictured), NCL’s outgoing president and chief executive, said: “Today we celebrate the delivery of our 17th ship and the close of our history-making Breakaway-Plus class.

“Our dedication to creating next-level offerings on board, will allow us to continue to deliver meaningful experiences for our guests when Norwegian Encore arrives home to Miami.”