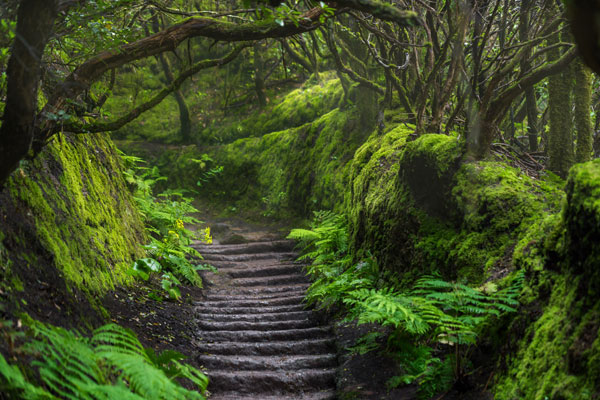 Tenerife has sunshine and beaches galore, plus so much more, finds Helen Ochyra.

I feel like I’m strolling through a children’s book; thick branches twist up from the path on both sides, joining in a thicket of greenery that dapples the sun overhead, while all around I can hear birdsong. This is the Anaga rainforest – and you might be surprised to learn that it’s in Tenerife.

The popular Canary Island may be best known for its year-round warmth and sun-baked beaches, but its dramatic volcanic landscape also lends itself to adventure. And to getting off that sunlounger.

The main temptation pulling visitors away from the island’s resorts is Mount Teide, the soaring volcano at Tenerife’s heart. This is Spain’s highest mountain and the perfect place for a hike. For the experienced, there’s the five-hour trail from Montaña Blanca, which climbs steeply through the black lava to reach the crater; while those seeking an easier ride can hop aboard the cable car and reach the 3,555-metre summit without breaking a sweat.

From the upper cable car station it’s just an hour’s walk to the crater and you’ll be rewarded with sweeping views across the Atlantic to neighbouring islands La Gomera, El Hierro and La Palma. No matter how you get to the top, you can descend on the cable car and be back at the beach in time for sundowners. 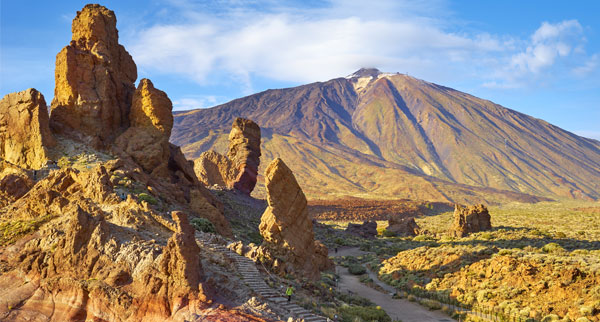 Don’t fancy standing atop a steaming volcano? Strike out among the Roques de García on an easy two-hour hike around a weirdly wonderful landscape of twisted, cooled lava. Here the Finger of God reaches up to pierce the sky and the vast cathedral stands alone in the badlands. This is the sort of landscape you imagine might appear on the moon, and a myth persists that Star Wars was filmed here (it wasn’t).

Alternatively, delve into that storybook rainforest on a walk from Cruz de Carmen towards Llano de los Loros, a viewpoint reached in about 15 minutes; or continue to Las Carboneras village before looping back through the trees on a four-hour rainforest exploration.

Rather be in the water? Tenerife’s sandy beaches and perpetually warm waters make the island an enticing playground for watersports enthusiasts. Head to Playa de la Tejita, near the town of El Médano, and you’ll find reliable waves and wind for surfing and kitesurfing. The schools strung along the sands offer lessons for beginners and the beach is ideal for those first stumbling forays out to sea – the bottom is sandy, making the inevitable falls far less fearsome. 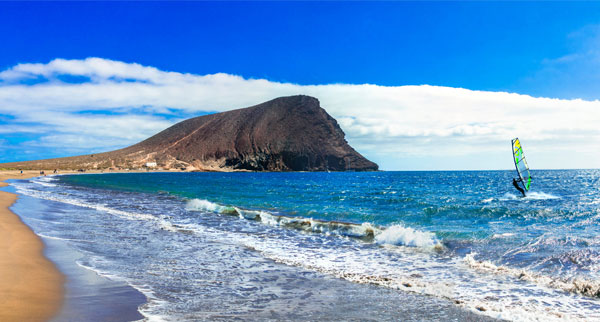 There are also reliable surf breaks for beginners offshore from Playa de las Americas at El Conquistador, while the experienced should head to the north and northwest coasts for more powerful waves at spots such as El Socorro and Baja de Martiánez.

Tenerife’s waters are also home to spectacular marine life, especially between the west coast and La Gomera. Several operators lead kayaking tours in these waters – if you’re lucky you might see dolphins cruising along beside you – while Los Cristianos is the jumping-off point for whale-watching cruises in search of pilot and sperm whales. Find a spot to stand on deck and survey the sea – you’re looking for the tell-tale puff that often comes before a whale emerges, or takes a dive, flicking its tail in greeting as it descends.

There are so many adventures to be had in Tenerife but, for me, the best was a walk beneath the lava at Cueva del Viento. It’s Europe’s longest lava tube and 250 metres of it is open for tours. As I followed my guide into the bowels of the island I switched on my headlamp. Tiny blisters of lava covered every surface including the earth underfoot, and the roots of a bush growing above ground hung in mid-air beside me. This is a tunnel forever frozen in time, formed by molten lava in an ancient volcanic explosion. It’s like nothing I’d seen before and, I can safely say, it was worth getting off my sunlounger for. 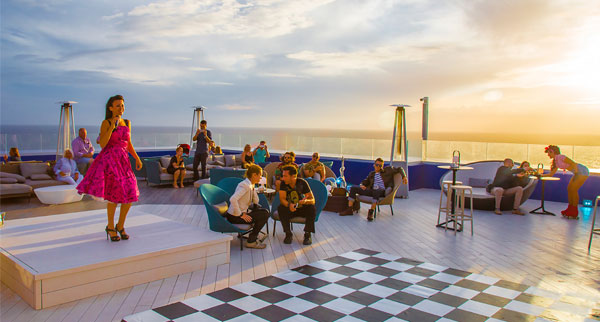 Best for families: Kids will love the Cinderella-style castle that dominates the pool area at the Fantasia Bahia Principe Tenerife, while parents will be delighted with the kids’ clubs. From £171 per night all-inclusive.
bahia-principe.com

Best for romance: The Hotel Botanico is surrounded by tropical gardens and has plush rooms plus the island’s best spa (complete with massages alfresco). There are good dining options too, including The Oriental, which serves Asian haute cuisine. From £161 per night B&B.
hotelbotanico.com

Best for fun with friends: Hotels don’t get more rock ‘n’ roll than the Hard Rock Hotel Tenerife, with live music at the Beach Club, poolside DJs and even the chance to borrow a guitar for an in-room party. From £158 per night B&B.
hardrockhoteltenerife.com

Off-season escapes to see the authentic side of Majorca
48 hours in A Coruña, Spain
Traditional wine-making in Lanzarote