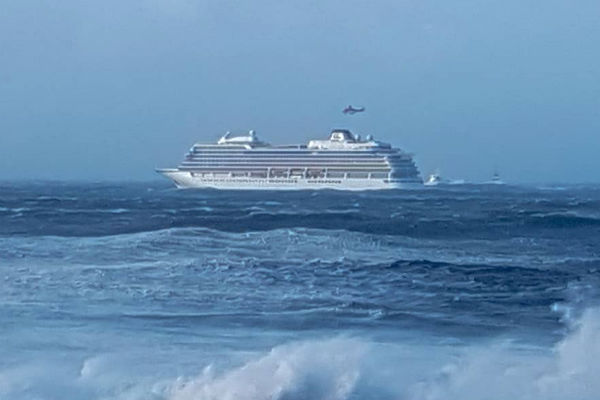 Viking Sky came “within a ship’s length” of running aground along a dangerous stretch of Norway’s coastline during a storm, according to a report.

The vessel was manned by 458 crew and carrying 915 passengers when its engines shut down while trying to sail from Tromso to Stavanger on March 23.

An interim report by the Accident Investigation Board Norway (AIBN) found that all three operational diesel generators shut down within 19 minutes of each other, causing a blackout and loss of propulsion.

They had shut down “as a result of the loss of lubricating oil suction due to low sump tank levels, combined with pitching and rolling”.

The report said the lubricating oil sump tanks of all the diesel generators were maintained at 28%-40% capacity – but the manufacturer’s recommendation was to maintain them at 68%-75%.

Without power, the ship drifted to the shore in an area called Hustadvika, described as “notoriously dangerous” because it is exposed to the weather and has extensive off-shore shoals.

AIBN estimates that Viking Sky came “within a ship’s length of grounding, having passed over or in immediate proximity to 10-metre shoals, before propulsion could be re-established”.

A mayday was broadcast and both anchors were dropped but they did not hold.

Passengers and crew began to muster and a major rescue operation began, with helicopters evacuating those onboard.

The vessel was out of danger by the next morning, after 479 evacuated passengers had been received at an emergency centre ashore.

On March 27, the Norwegian Maritime Authority issued a safety message which asked “all shipping companies to take the necessary precautions to ensure the supply of lubricating oil to engines”.

The interim report supports that advice and added: “All vessel owners and operators are recommended to ensure that engine lubricating oil tank levels are maintained in accordance with engine manufacturer’s instructions and topped up in the event of poor weather being forecast.”

The investigation will continue and will look at other aspects of the incident including planning, evacuation and safety management.

Among those rescued, 20 passengers suffered injuries. A total of 200 passengers were British.

Footage posted on social media from inside the vessel showed it moving violently and passengers in life jackets.

Viking Sky evacuated after loss of power in bad weather