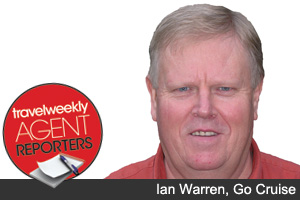 According to ACE director Flo Powell, 1.65m cruises will be taken this year by UK passengers, with the figure forecast to hit 1.77m in 2011. The most popular destination for them is still the Mediterranean, but Northern Europe has now overtaken the Caribbean to move into second place.

Personally the numbers don’t surprise me, as I find that cruising from the UK is growing in popularity, following the recent problems with the ash cloud and BA strikes.

ACE is the training arm of the PSA, explained Flo, and was responsible for training 20,000 agents in 2009. I use the online training myself, and can recommend it to anyone who wants more knowledge about selling cruising; not just the mainstream cruise lines, but also the niche lines. The section on destinations is also very useful.

Flo then went on to announce details of the 2011 UK Cruise Convention, which will be held in Southampton again, and will take place from 3rd – 5th May. We were told that we will be able to visit Balmoral, Independence of the Seas, Queen Elizabeth and Aurora.

The subject of e-ticketing does seem to divide cruise lines from agents. Cruise lines have found a way of cutting (and passing on) their costs, but many agents feel that a lot of customers still expect to receive a ‘real’ ticket.

It was good to see that on this occasion none of the cruise lines tried to make the environmental case for going to e-ticketing, as this argument doesn’t really stack up when agents or passengers end up printing them anyway.

CCS’s Giles Hawke made the point that CCS had managed to save £3m per annum by the move, yet Tom Britton (owner of Marble City Travel) countered by saying that his printing costs had consequently gone up by between 500% and 600%.

Creative Cruises director Jason Peters felt that even if proper tickets and wallets weren’t provided by the cruise lines for all passengers, then they should be for the higher grade cabins.

Fred Olsen’s Nigel Lingard admitted that his target market was more likely to want traditional printed tickets, as they are less likely to be computer-literate. He did add though that research has shown that more of their passengers are researching on the internet before booking, and his marketing budget on social media is being increased for 2011.

My personal view is that it often depends if the client is ‘new to cruise’ or an experienced cruiser. The ‘new to cruise’ clients (a) don’t know any different, and (b) are likely to be younger, and are either computer-literate themselves or have young children able to do it all for them.

Many experienced cruisers are of an age where they don’t have easy access to the internet, so aren’t able to make use of online check-in, and pre registration for excursions and alternative dining.

Moreover, I have often heard comments that receiving the documents in a nice wallet is part of the whole cruise experience. Having to print pages off the web devalues the holiday – especially if the customer has paid several thousand pounds per person.