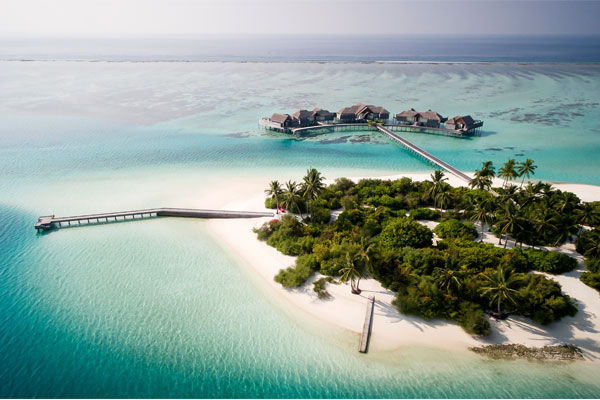 Laura French combines chill with thrill on a trip to two of the Maldives’ most exclusive resorts.

It’s the colours that hit you first in the Maldives: electric-blue lagoons flecked with rings of jade, glaring green palms silhouetted against swimming-pool skies, and pink-gold rays bouncing off powdery sand so dazzlingly white you can’t look directly at it.

At sunset, swathes of violet, peach and red descend in smooth, painterly strokes, and it’s all so vivid and surreal it’s like stepping into a Monet painting, or looking at the world through a photo-enhancing filter.

A week spent at two of its most exclusive island resorts – Naladhu, in South Malé atoll, and Niyama, in the Dhaalu atoll – was as close to quintessential paradise as I could imagine, showing me two very different sides to this archipelago; one totally peaceful and charmingly rustic, the other edgily trendy and enjoyably lively.

They also showed the Maldives is far more than just its beaches, with outdoor adventures, local excursions and cultural activities on hand for those wanting to go beyond the fly and flop. Here’s how to sell them to luxury-loving clients after a break they’ll never forget. 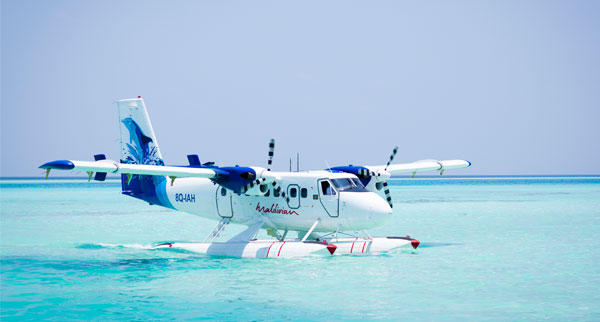 The vibe: Trendy, buzzy and a little quirky (which makes it a hit with Hollywood A-listers, I’m told), Niyama is all about the experience, and that was true from the get-go. It started with me soaring over the Indian Ocean in a seaplane, engine whirring, seat jittering, world shrinking, as islands glowed below in luminescent rings from a sea coloured deep indigo.

Split into two connected isles – ‘chill’ and ‘play’ – it’s the third-biggest island in the Maldives, so it feels more like a village than a single resort. It’s also surprisingly green, with jungle-like canopies arching over rustic, sandy trails. You’re given a bike so you can amble along them on two wheels, and buggies are also on hand to shuttle you around.

There are overwater and beach villas – all ultra‑modern and Bond-level sleek, with remote-controlled blinds and shiny, mirrored minibars – plus quirky hangouts like the laid-back Surf Shack, where wooden beach swings look out over ocean sunsets. 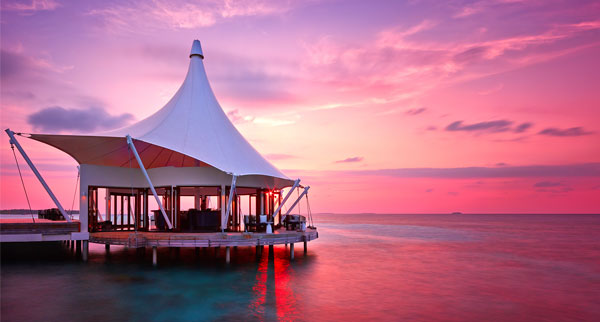 Playtime: Activity is at the heart of this place, and surfing is one of its fortes – it’s the only resort in the Maldives where you can surf straight off the shore, drawing pros from across the world. There’s something for all levels: we had a beginners’ lesson that saw us learning the basics in a calm, lagoon-flat stretch of water, gentle ripples passing under the board as we glided serenely along.

Beyond that there’s waterskiing, jetskiing, wakeboarding and more, but I opted for parasailing and found myself taking off beneath a huge parachute to float wistfully through the sky, island below turning into a blob of forest-green, vast expanse of teal stretching below like a giant pool.

But my highlight had to be sea-bobbing, which saw me nose-diving into the depths of the ocean while being pulled along by a tiny, colourful jet.

Downtime: It’s not all about intense activities here. Among my highlights was a Turtle Quest snorkelling trip in search of these graceful creatures. We spotted three gliding through the water beside schools of colourful fish and rocky, jagged coral, before witnessing a dolphin flip in the air and belly-flop back down.

I also took part in a Maldivian cooking class, whipping up a three-course lunch of fresh tuna soup and coconut-infused curry against a backdrop of glittering ocean (the classes take place at beachfront restaurant Blu).

But the most serene experience was the spa, an outdoor pavilion set amid exotic greenery, where treatment rooms faced the lagoon so you could see the water. Treatments were personalised – I was asked which oil and music I wanted – and there was a huge menu of Thai, Ayurvedic and other options, plus a relaxation garden where I sat feeling positively Zen for a good hour afterwards. 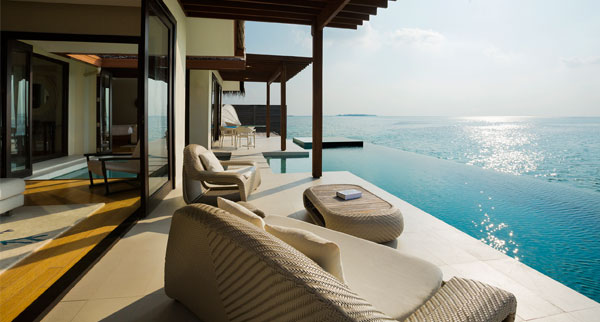 • Subsix: Doubling up as a glow-party club, this underwater restaurant has
spiky leather chairs that look like sea urchins, fluorescent-blue lights replicating
the sea and quirky touches that feel as surreal as dining on fish while watching
them swim through the surrounding ocean.

• Nest: A wooden deck perched in the treetops (pictured), this had us eating
Asian-fusion dishes including exquisite sushi, hoisin spring rolls and sweet chilli
prawns amid the jungle canopy. There’s also a teppanyaki bar downstairs, where
a local chef whipped up fresh seafood with theatrical flourish.

• Edge: Reached by boat, this experimental restaurant – set on a jetty – is all
about romance. Dishes were outlandish and creatively presented, with the likes
of oysters, blue crab and white chocolate panna cotta served beneath a starry sky. 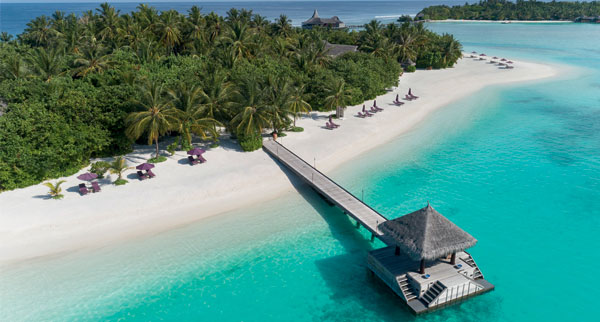 The vibe: Quiet, understated and low-key, Anantara resort Naladhu felt a world away from Niyama, with a remote, peaceful setting in what felt like the middle of nowhere. It is set on a long, empty stretch of chalky white sand, with a secluded, mirror-flat lagoon on one side and the crashing waves of the Indian Ocean on the other – and it felt deserted the whole time I was there.

With just 20 houses – rustic Maldivian and colonial-inspired in design, complete with private gardens, infinity pools and open-air bathrooms – it’s known as one of the most exclusive spots in the Maldives, and it’s easy to see why. Every guest gets a butler, so the service is impeccable, and it has a back-to-nature feel with thatched roofs, weathered-wood furnishings and clusters of palm trees. 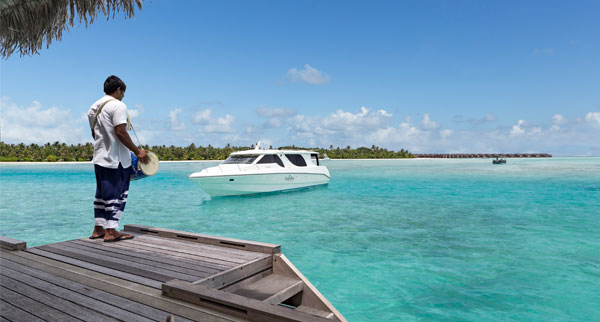 Playtime: The resort neighbours two other Anantara hotspots – adult-only Anantara Veli, connected by a footbridge, and family-friendly Anantara Dhigu, reached by a short boat trip across the lagoon – meaning there’s plenty going on for those who want to explore.

Dhigu is the place to go for active pursuits, with a diving and watersports centre hosting the likes of kitesurfing, sailing, flyboarding, surfing, waterskiing and more.

There’s also a lengthy list of excursions, from whale shark and manta snorkelling to dhoni fishing, dolphin watching and a ‘tea-time’ trip to a nearby inhabited island, where you can meet local Maldivians to hear about their way of life.

I opted for a diving trip and it was exceptional. We spotted hundreds of exotic fish – patterned with black and white polka dots, bright yellow rings and fluorescent-lit purple strips – gliding around an underwater universe glowing magenta, red and iridescent blue.

One turn took us into a dark, cavernous tunnel, where thousands of minuscule fish darted frenetically under the light of my instructor’s torch; another revealed a purple clump of rock that looked like a huge gaping mouth, before a turtle whooshed past beside tree-like plants swaying in the current.

Downtime: The real selling point here is the tranquillity. This is the type of place where you come to disconnect from the world in your own little piece of paradise – and it’s seriously therapeutic.

I was pampered with a deliciously aromatic coconut massage at the jungle-clad spa on Veli, and it was blissful. I also indulged in some exceptional food, including tuna at Maldivian-themed The Living Room, and exceptional Thai at Baan Huraa.

But the most relaxing moment came when I took a sunset dip in the lagoon. Gliding along beneath a golden sky, bath-warm water soothing my body, had me feeling a million miles from anyone or anything – which is really how I felt throughout my stay here.

I’m not sure I’d really understood the term Zen – that is, until I wound up on this deserted beach, turquoise ocean lapping my feet and rippling blues blending into the horizon.

• The Living Room: A handful of tables on the beach make up this exclusive, boutique-feel restaurant, with the sounds of swishing sea accompanying a gourmet menu (think poached lobster with mango, local tuna with foie gras and chocolate fondant bursting with a lavalike sauce). It’s exclusive to guests of Naladhu, but they are free to dine at any of the three resorts’ nine restaurants.

• Sea.Fire.Salt: It’s all about the setting here, with fresh reef fish, lobster, prawns and steak served on elegant white tables set on a deck overlooking the lagoon

Nightly rates at Naladhu Private Island Maldives start from £1,177 per room on a B&B basis.
anantara.com/en/naladhu-maldives

The best new hotel openings in the Maldives
Indian Ocean honeymoon destinations
From Muscat to the Maldives: A twin thing