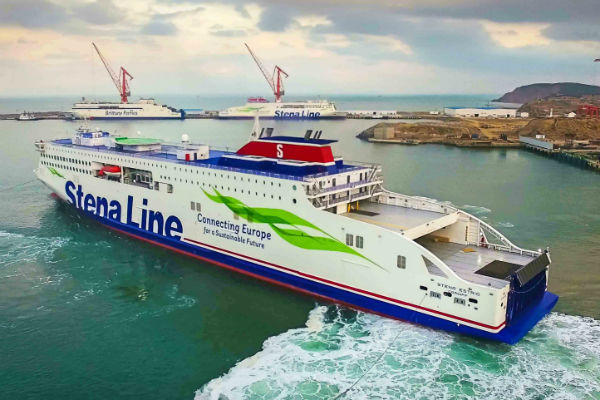 A new Stena Line ferry has embarked on a 10,000-mile journey from a shipyard in China to the UK.

The next generation Stena Estrid is being delivered with a crew of 27 on board and is due to enter service in the new year.

The 1,000-passenger ferry is set to enter service in January on the Dublin to Holyhead route.

The vessel set off from the Weihai Shipyard in north-west China on the first stage of its voyage, a week-long 2,657 nautical miles trip across the South China and then East China Sea to Singapore.

The ship will refuel and stock up with provisions before travelling at a speed of 15 knots through the Malacca Straits to Galle in Sri Lanka, before crossing the Indian Ocean and making its way to the Suez Canal.

Stena Estrid will then head west across the Mediterranean for another fuel stop at Gibraltar where more crew will join to undertake familiarisation and training during the final leg across the Bay of Biscay to the Welsh port of Holyhead, where it is expected to arrive just before or after Christmas.

Final preparations will then take place to get the vessel to start service on the route in mid-January.

A further two of the new ferries are to be deployed on the Irish Sea with Stena Edda expected to sail from Belfast to Liverpool next spring and Stena Embla on the same route in early 2021.

Senior master Matthew Lynch said: “After six years of planning and construction, we are so excited to be finally on board Stena Estrid and departing China on our way home to Britain.

“We obviously have a very long way to go but we’re really looking forward to it and to meeting with our colleagues in Gibraltar, before embarking the final leg of our journey to Holyhead.”