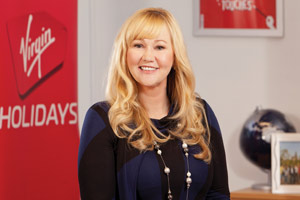 Amanda Wills met me in the Virgin Holidays’ reception in Crawley hardly able to walk.

“Who else would take kids trick or treating in Jimmy Choos?” she asks, as she hobbled forward.

It won’t have helped that she was on her feet all day the day before helping at Virgin Holidays’ concession within House of Fraser in her home town of Liverpool.

Or indeed that she’s trying to raise money for Virgin Holidays’ new school for entrepreneurs in Jamaica – all while running one of the most successful divisions in the Virgin empire.

Wills lives and breathes her role as managing director of Virgin Holidays – and her passion is as strong now as it was when she first took the role 10 years ago.

“I love it here,” she says. “I never wake up not wanting to come to work. I always said that this was the job to have in travel and I’ve got it!”

Her office is adorned with thank you cards from customers, suppliers and staff and it’s clear that excellent products, great value and outstanding service define what running a holiday company is about for Wills.
That, and doing it profitably.

“I can’t understand people who run businesses for years never making any money,” she said. “I was never worried about 2009-10. I was more concerned about the year we’re in now. We’re on track to achieve even higher profits than we did last year.”

This is some achievement considering the period covers the ash cloud and the introduction of higher Air Passenger Duty (APD).

“Summer 2011 is selling really well. Travel agents love selling us early as we have access to inventory others don’t and because of the extras we offer early bookers.

“We reckon we lost about 8,000 customers because of the ash cloud, but they all appear to be coming back for 2011.”

Wills is confident that this week’s APD rise won’t affect bookings. “It upsets me that destinations such as the Caribbean will be hardest hit. We’re lobbying against it, but as a business we will have even more competitive prices and more added value, such as upgrades of rooms and cars, access to our V-Rooms and our new Virgin lounges in hotels. Everyone else is taking stuff out, but it’s about giving more.”

“The trade/direct split has inevitably changed, but the agent sales are still growing,” she says.

“Research we’ve just carried out shows customers research online, but instead of calling our sales centre, they go to a travel agent. Far from trying to cut out the middle man, customers think agents can negotiate the best deal.”

Wills is hugely proud that Virgin Holidays is now much more than just a long-haul tour operator.

“We have cruise, tailor-made journeys, through Bales Worldwide, a budget brand following our acquisition of Travel City Direct, a sustainable brand in Human Nature, a successful retail network and still one of the coolest brands in travel. We do so much now I’m thinking of calling it The Virgin Holidays Group,” Wills jokes.

As if this wasn’t enough, Wills has pushed for Virgin Holidays to fund its own version of the Branson School of Entrepreneurship.

The school, in Montego Bay, Jamaica, will open in June 2011 with Wills on the board. Partners will donate into a seed fund to pay for between 30 and 40 places each year for Caribbean nationals.

“I come across so many people with great ideas who just need a break. I want to have satellite offices all over the Caribbean so they don’t all have to come to Jamaica to present their ideas,” Wills said.

Wills has already devised a reward scheme for staff in Crawley that allows them to earn two weeks off work to teach at the school.

“Everyone who works here knows what we’re all about. We have to look after the destinations we operate in and sell the best holidays, and do it profitably.”