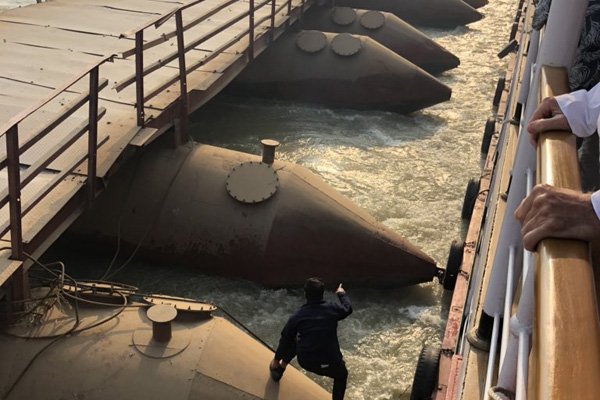 River line Pandaw has evacuated passengers from Kindat Pandaw after the ship hit a bridge on the Ganges.

The collision is understood to have happened on Wednesday morning as the 36-passenger vessel was sailing on the upper section of the river to Varanasi in India.

A spokesperson for Pandaw confirmed all evacuated passengers were safe and described the incident as “a very minor collision”.

It is not known how many passengers were on board at the time.

Tug boats are understood to be at the scene.

The spokesperson added: “It is very minor and a frequent occurrence on river ships. There is no danger at all.”

But journalist Sue Bryant, who was on the ship at the time of the crash, tweeted: “Major crash on the Ganges and Kindat Pandaw has ripped a pontoon bridge off its hinges.

“All passengers ashore but we’re shaken.”

Pandaw moved Kindat Pandaw to the Ganges from Myanmar earlier this year.

More:  Pandaw to move third ship to India from Myanmar