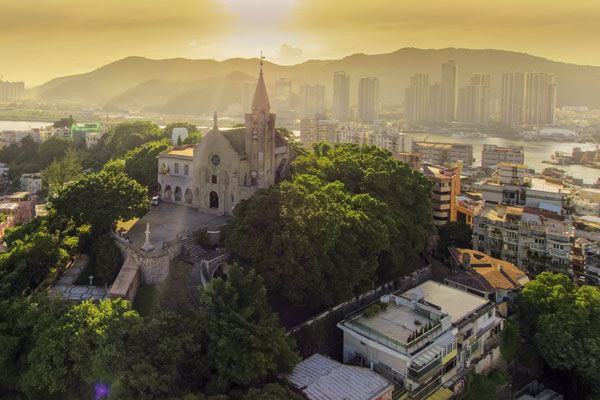 From colourful colonial architecture to a world-class culinary scene, Cathy Toogood ventures beyond the casinos on a trip to Macao.

Ambling around Macao’s Suzhou-style Lou Lim leoc Garden, with its lotus ponds, towering bamboo and snaking bridges, it’s easy to forget that I’m in the ‘Vegas of Asia’. The only noise is the rhythmic hum of cicadas and a rehearsal of Chinese opera by musicians performing in its central pergola.

I’ve walked here from the Three Lamps District, through a busy market selling everything from spiky durian fruit to mounds of glistening sweets. I popped into a Taoist temple en route, then grabbed a coffee from a Portuguese cafe.

“This patchwork of culture is one of Macao’s most beguiling features, and shouldn’t be overshadowed by its glitzy high rises.”

On the garden’s edge, I go into a canary-yellow colonial building, home to the Macao Tea Culture House museum, to look at a selection of late-20th-century teapots, then explore the St Lazarus Church District, where colourful Portuguese buildings and cobbled streets are the perfect backdrop for photographs.

This patchwork of culture is one of Macao’s most beguiling features – and it shouldn’t be completely overshadowed by the bright lights of its glitzy high rises or the blackjack tables in its casinos.

Clients who love glamour and gambling will be wowed by the luxury and service in its world-famous resorts and hotels. But they can also complement this indulgence with a couple of days discovering a unique destination where European and Asian influences meet, and where attractions range from a giant panda pavilion to the world’s highest commercial bungee jump at the Macau Tower. 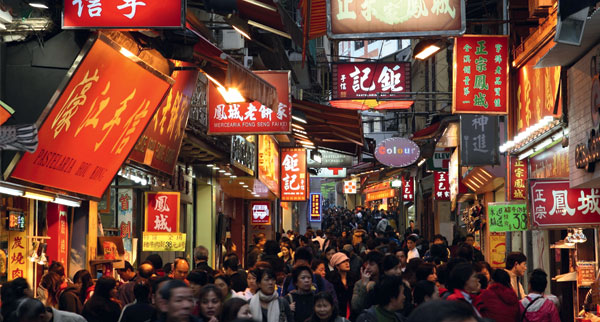 Located on a peninsula attached to the Chinese mainland and made up of two islands, Taipa and Coloane, Macao was under Portuguese administration for more than 400 years. Having been handed back to China on December 20, 1999, the city is now celebrating its 20th year as a Special Administrative Region of China. But its history as the last European colony in Asia is still evident, from its architecture and hotels to its food.

“The city is now celebrating its 20th year as a Special Administrative Region of China.”

But clients don’t have to spend a lot to eat well, as a walk around Taipa Village demonstrates. On Rua do Cunha, known as the area’s food street, I buy one of Macao’s most famous sweet treats, an egg tart from Lord Stow’s Bakery.

With its original outlet on Coloane Island, Lord Stow’s Bakery was set up by English industrial pharmacist Andrew Stow, who invented his own version of pasteis de nata in 1989. Now, more than 20,000 of the tarts are sold in Macao every day.

On the same street, I watch alua (a sweet made with butter) being hand-made, see piles of beef and pork jerky for sale in neon-lit shops, and sample almond cookies. 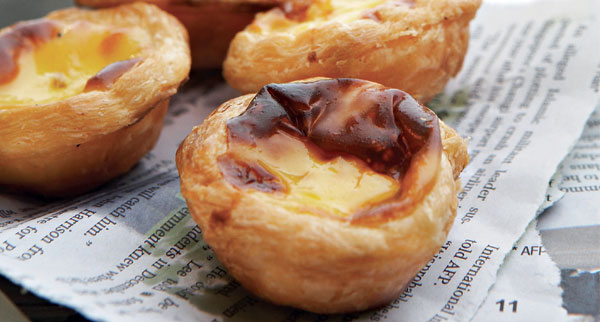 Just off Rua do Cunha is traditional Portuguese restaurant Antonio, where fado music plays out against a yellow-and-blue-tiled interior. The aim here is to serve authentic Portuguese cuisine. “I leave the nouveau cuisine to the hotels,” larger-than-life owner Antonio tells me, chuckling, when I visit.

Clients should also sample some Macanese fusion cuisine. Combining Chinese ingredients and techniques with those from Portugal, plus spices brought to Macao by Portuguese merchants, Macanese dishes are rich and spicy. Must-tries include African chicken (marinated in a spicy, coconut sauce) and minchi (spiced minced beef served with diced potatoes and a fried egg).

“But clients don’t have to spend a lot to eat well, as a walk around Taipa Village demonstrates.”

As well as being an area to sample some of Macao’s best food, Taipa Village is the perfect example of old and new Macao sitting side by side. A short walk from Rua do Cunha, you’ll find Taipa Houses-Museum – five pastel-green, colonial houses dating back to 1921, one of which is set up as it would have been when it was lived in.

Equally colourful is the street art on Taipa’s buildings, such as a cartoon mural of locals going about their daily tasks, on the side of souvenir shop Cunha Bazaar. 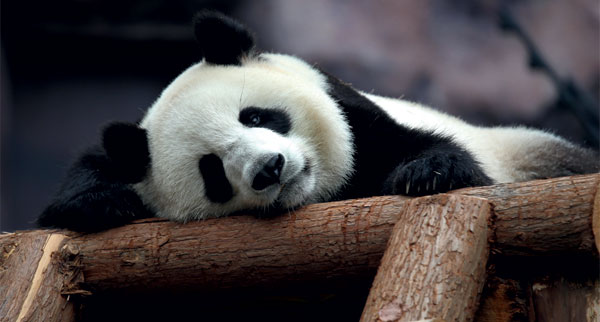 Macao’s other island, Coloane, is located just south of Taipa. Despite its proximity to the dazzling resorts on the Cotai Strip, this is a place to slow down. “We say Coloane is our lungs,” Jenny explains as we walk along a trail next to Hac Sa Beach, with rock formations either side.

Protected from overdevelopment, Coloane has two beaches (Hac Sa and Cheoc Van) as well as Coloane Village, which is home to the original Lord Stow’s Bakery, alongside charming, colourful, corrugated-iron fishing huts.

Among the island’s most famous attractions is the Macao Giant Panda Pavilion, which is home to Kai Kai and Xin Xin, and their young twins. Advise clients to visit between 3pm and 4pm, as it’s feeding time, so they are most likely to get a good look at the playful creatures. You can’t help but smile while watching them chomping bamboo, lolloping around and cheekily doing forward rolls. 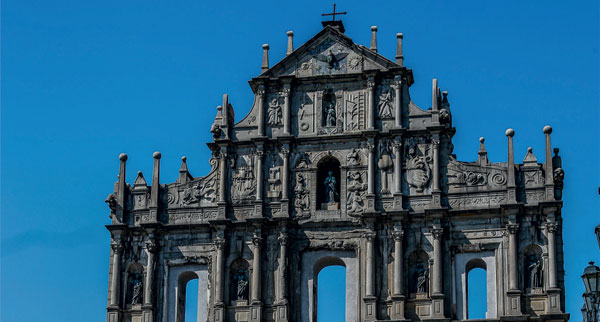 Macao’s historic, Unesco-listed centre is not to be missed either. It’s home to some of Macao’s biggest sights, including the ruins of 17th-century St Paul’s church, tiled Senado Square, and A-Ma Temple, which is where, legend has it, Macao was given its name.

After a walking tour of the attractions our group ventured down the pretty, pastel-coloured Lover’s Lane, where couples inscribe their names for luck. Another colourful street nearby is Patio de Chon Sau, an arty spot with brightly decorated shops, cafes and bars.

“Among the island’s most famous attractions is the Macao Giant Panda Pavilion, which is home to Kai Kai and Xin Xin.”

These small, colourful pockets were what made Macao most memorable for me, and I loved that I could dip in and out of them, complementing quieter moments with famous sights, over-the-top shows with fascinating history.

Macao may be small, but its distinct character will make a big impression.

Five of the best foods to try

• Chinese dim sum: From elaborate creations in Michelin-starred venues to simpler versions, these bitesized dishes are a must try.

• African chicken: Head to a Macanese restaurant to sample one of Macao’s most famous spicy meals – Restaurante Litoral is a good option.

• Pork chop buns: These marinated pork chop sandwiches are served all over Macao as a street-food snack.

• Minchi: This is another must-try Macanese dish, made from spiced minced beef and diced potatoes, topped off with a fried egg.

Macao has escaped the disruption caused by the protests in neighbouring Hong Kong, but most travellers will reach Macao by flying direct to Hong Kong. The Foreign Office advises that some Mass Transit Railway (MTR) metro stations in Hong Kong are closed as a result of the protests, and there are reports of “greater scrutiny” at border crossings. Sue Whitehead of the Macao Government Tourism Office says: “It is business as usual in Macao, which combines perfectly with destinations throughout the region.”

Cathay Pacific offers three routes between the UK and Hong Kong, with five flights a day from Heathrow, and daily flights from Gatwick and Manchester. Economy return fares from Heathrow start at £659. Get to Macao by hour-long high-speed ferry ride or a 40-minute drive across the new road bridge.
cathaypacific.co.uk

Cox & Kings offers a five-night trip to Macao from £2,195 per person next autumn, based on two sharing. The price includes British Airways flights from Heathrow to Hong Kong, ferry travel to Macao, five nights’ B&B at the Sofitel Macau at Ponte 16, transfers, a half-day coach tour and services of a guide.
coxandkings.co.uk