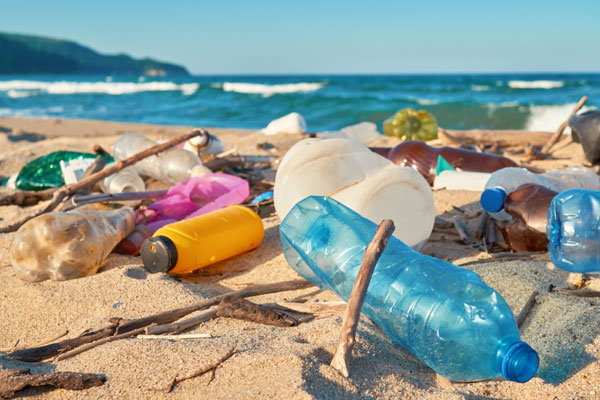 Tourism is at the forefront of the “global emergency” in plastics waste and the industry needs to act urgently, with the Mediterranean among the worst-affected areas.

Manufacturing it “produced two billion tonnes of CO2, 6% of the annual global total”, she said. Yet vast quantities of plastic rapidly end up as waste.

Von Munchhausen told the GSTC conference in the Azores: “There are 150 million tonnes of plastic in the ocean and a truck load enters the ocean every minute.

“Mediterranean countries are the fourth-largest producer of plastics, and all of it becomes waste in under a year.

“Most plastics aren’t biodegradable. By 2030 we could have more plastic in the oceans than fish. It is toxic for the environment and for tourism.

“In the Mediterranean, only 72% of plastic is collected and disposed of – 550,000 tonnes a year goes into the sea, equivalent to 33,800 plastic bottles every minute.”

She contrasted the islands of Mallorca and Zakynthos in Greece, saying: “In Mallorca, plastic waste doubles in summer. Mallorca is drowning in waste, [but] it has passed a law banning a list of single-use plastics from 2021.

“Zakynthos can’t cope. In summer, the waste increases two and a half times. Measures are urgently needed to reduce plastic use.”

Von Munchhausen said: “Destinations can’t wait for investment in infrastructure [and] many hotels have reached a dead-end replacing plastic with paper or wood, merely replacing one problem with another. [But] the industry can contribute to alleviating the problem.

“We can have as a first goal that we don’t have any more leakage [of plastic] into nature.”

She insisted: “A luxury hotel should mean a waste-free landscape, clean beaches and a healthy ocean. No one wants to lie on littered beaches or swim between plastic bags.

“The value of a trip is not gauged by the variety of products in a hotel wrapped in plastic. Clean beaches and healthy seas are more likely to be remembered.”

Rachel McCaffery, director of industry campaign group Travel Without Plastic and senior sustainability advisor to G Adventures, told the conference: “There are things the industry is doing to remove plastic bottles and take out single-use plastics, but it’s not enough.”

She said: “We have an opportunity to get a success story here. Plastic pollution is simple. None of us like it. We all want to see less of it.

“It’s not something one company or organisation can do on their own. [But] we have the potential for a movement for change.”

However, McCaffery said: “There is a lack of knowledge of solutions and of where to start. Some businesses think it will be expensive to transition. In fact, there can be cost savings. Also habit and laziness are holding things back.

“There is a lot of confusion and a lot of miss-selling, particularly of biodegradable cups. These often need to be collected, sorted and industrially processed.

“Health and safety [regulations] are one of the reasons [often given] for single-use plastic items, but this is sometimes used as an excuse. It can also be about brand standards or star ratings.”

Yet she insisted: “Customers’ expectations have changed. We have lobbying power. If you’re given a plastic straw [in a hotel], if you think there is too much plastic, say something.”

Nguyen Dieu Thuy, oceans programme coordinator at WWF Vietnam, described the problem on the Vietnamese island of Pho Quoc which has a population of 120,000 but attracts 2.5 million tourists a year.

She showed a photograph of a beach covered in plastic, explaining: “The local government just put up a fence to block the view of the plastic on the beach.

“We began a project with hotels that recognise the issue and try to influence others through the hotel association.”