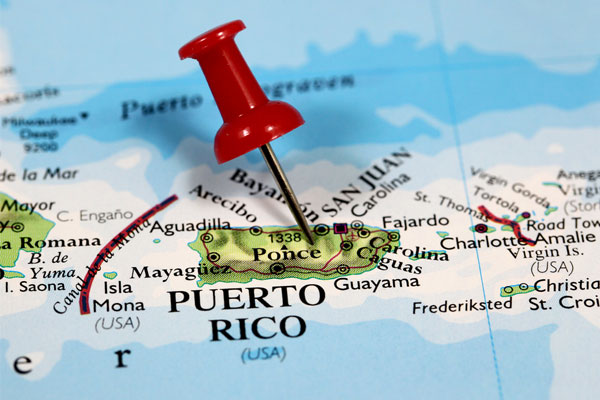 A nationwide state of emergency has been declared in Puerto Rico after a series of damaging earthquakes.

A 6.4-magnitude quake that struck near Ponce on the south of the island on Tuesday is the strongest to have occurred in more than a century.

Governor Wanda Vazquez announced the state of emergency as it emerged that at least one person has been killed and others injured.

Hundreds of thousands of people are without water in addition to extensive electricity cuts after power plants were damaged on the south of the Caribbean island.

Structural damage and landslides have also been reported nationwide.

Authorities have warned that aftershocks are likely.

Disruption to travel and business operations are expected to continue as damage is assessed and the emergency response continues, according to local reports.

Puerto Rico was hit by a 5.8-magnitude quake on Monday that destroyed a popular tourist rock formation, damaged homes and caused power cuts.

Cruise ships are continuing to call into the capital of San Juan.

A Carnival Cruise Line spokesman said: “We are closely monitoring the situation in Puerto Rico following the earthquakes that were reported and are in touch with local authorities and the US Coast Guard.

“The U.S. Coast Guard issued a news release confirming that all ports in Puerto Rico and the US Virgin Islands are open for business.

“There are no changes to our itineraries that call at San Juan or to sailings of our San Juan-based ship, Carnival Fascination.

“The epicenter and most damage are on the south side of the island, away from where our ships call and our guests visit.”

Discover Puerto Rico said: “While most hotels are operating with generators, power restoration across the Island has already begun and been restored in some areas.

“Power is being restored first to hospitals and areas of primary need.

“There are no major disruptions to tourism as it does not appear that areas outside the southern region of the Island were impacted.

“Some properties in the southern region of the Island have reported damage. These include Hotel Copamarina, Ponce Plaza, Hotel Guánica and Costa Bahia. Their main priority right now is ensuring guest safety.

“Two tourism sites, Punta Ventana in Guayanilla and the Ruins of the Lighthouse in Guánica, reported damages as well.”

The US territory has been rocked by hundreds of quakes since December 28, including ten of magnitude 4 or greater, the US Geological Survey said.