The 9/11 Memorial & Museum is a sobering experience, but one that helps visitors understand its devastating impact on the city, finds Samantha Mayling.

Nearly 3,000 people were killed in the September 11 terror attacks in 2001. Ten years later, a memorial opened on the site of the twin towers, followed in 2014 by a museum telling the story of 9/11 and events before and afterwards.

Arriving by subway, I emerged into the white, bright Oculus shopping mall, with a strange oyster-like roof and upmarket shops – quite a contrast to the sombre mood ahead. Heading outside, I saw One World Trade Center, the single skyscraper that stands near the site where the twin towers once stood.

The buildings’ footprint is marked by the memorial, which features two large pools surrounded by the names of those who died. Some names have white roses placed on them, poignantly marking that person’s birthday. 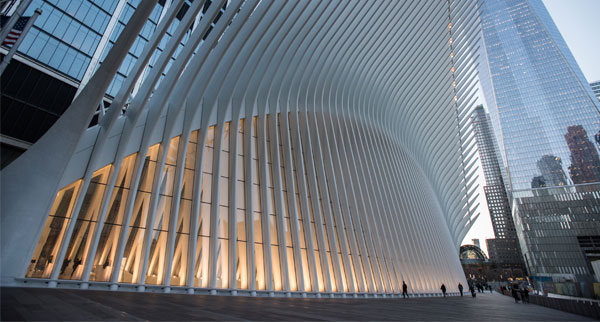 As you enter the museum, the first image shows the Manhattan skyline with the famous twin towers in a photo taken at 8.30am on September 11, shortly before the first attack. Next, a map of the US eastern seaboard shows the timing and locations of the four hijacked planes – two at the twin towers, one at the Pentagon and United Airlines’ flight 93, which crashed in Pennsylvania.

Remnants of the towers are displayed – twisted metal beams, stairs and the ‘last column’ of steel, inscribed with messages from emergency crews, volunteers and victims’ relatives. Inside the dimly lit building, the atmosphere is sombre and respectful – hardly anyone spoke and even if they did, it was in a whisper.

“Some images are familiar but others are less so, such as the Pentagon, and artefacts including clothing, papers and a melted phone.”

The timeline of events includes touching testimonies from fire crews and survivors, plus a message of love from a doomed passenger on flight 93.

Some images are familiar – dust-covered survivors and photos of people falling from higher floors – but others are less so, such as the Pentagon, and artefacts including clothing, papers and a melted phone.

Another section explores the rise of al-Qaeda, and plans devised by the terrorists who carried out the attacks. It is a moving experience and it’s an important insight into a global event that continues to shape life today.

Entry costs $26 for adults, $20 for over-65s or 13-17-year-olds, and $15 for under-12s. Admission is included in attraction passes such as The New York Pass, New York Explorer Pass and New York CityPass.
911memorial.org
business.nycgo.com/travel-trade