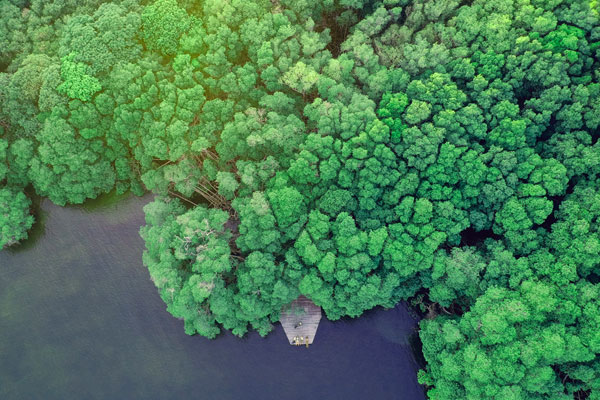 Take another look at beach paradise Tobago to uncover its wilder side, says Kirsten Henton.

Lying on my back, legs in the air, enjoying the peace of the ‘happy baby’ pose, it struck me how very pleasant it was practising yoga in this thatched, open-sided studio. The trickling water feature, chirping birds and fragrant herbs at boutique residence Kariwak Village all added to the ambience, so it was impossible not to feel right at home in this holistic hideaway.

No great surprise when you consider connecting with the natural world is what Tobago is all about. Forget large, branded hotels and intensely developed resorts – nature, wellbeing and the great outdoors are at the heart of what makes this island so appealing.

It’s a place where the beaches, colonial history and easy-going vibe are distinctly Caribbean, while the biodiversity, affordability and authenticity are uniquely Tobagonian.

Fruits of the forest

Main Ridge Forest Reserve sprawls over the island’s mountainous spine to the north. A symbol of Tobago’s long-standing relationship with the environment, some 15 square miles of Main Ridge formed the world’s first legally protected forest for the purpose of conservation, having been granted protected status by the British in 1776.

“The air, heavy and humid, hummed with birds and insects, and William delighted us with accurate renditions as he conversed with birds.”

Stopping at the park’s entrance, we were met by William Trim of Nature To and Fro Tours (prices from $100 per couple per day), whose vast experience and knowledge shone through instantly. After equipping us with wellies, he guided us along a trail, thick with gloopy mud and slippery stones.

Cocooned under this dense canopy, it was as though someone had fired up a sounds of the rainforest playlist. The air, heavy and humid, hummed with birds and insects, and William delighted us with accurate renditions as he conversed with birds in the trees above. Highlights included a great black hawk, which watched intently as we walked beneath his perch, and a leisurely tree frog. 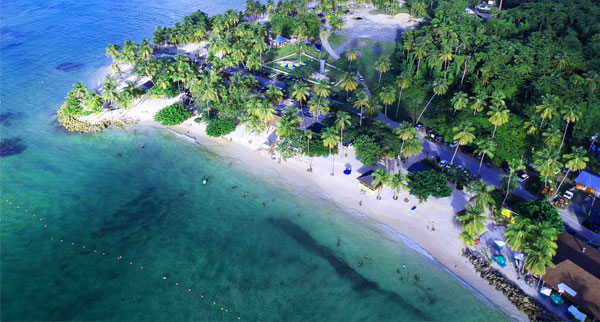 While much of the flora is protected, there’s still work to be done to protect the island’s wildlife, which is where Corbin Local Wildlife comes in. Part rescue and rehabilitation centre, part breeding reserve, it was opened in 2015 by hunter-turned-conservationist Roy Corbin and his English business partner, Ian Wright.

Their aim is to safeguard the future of Tobago’s native species, as well as the wider ecosystem. Residents, such as the curious nine-banded armadillo that gave my ankle a quick sniff with its wet nose before retreating to the safety of a cosy log, are often rescued injured or from captivity. Their passion is palpable and the fee ($25 for up to two hours) to see boa constrictors, caimans, red-tailed squirrels, manicous (possums) and agoutis, goes straight back to the organisation.

The diversity of Tobago’s birdlife, meanwhile, is no secret to avid twitchers. It attracts enthusiasts keen to catch a glimpse of some of the more than 260 species that call the various land and seascapes here – including the uninhabited isle of Little Tobago – home.

But you don’t have to don camouflage or sit in a hide to see some of the most dazzling passers-by. A look skywards was rewarded with gliding frigate birds and, out to sea, with bobbing brown pelicans, but it was at the Adventure Farm & Nature Reserve that we were introduced to Tobago’s superstars, via a frenzy of tiny fluttering wings that darted loudly past. This is where dozens of iridescent hummingbirds – no fewer than five of the island’s six species, including the scarlet-topped ruby topaz – come for their daily sugar fix from the feeders.

We were reliably informed that maintaining these feeders is no mean feat, as the savvy birds are quick to tap on the window with their beaks if the feeders run dry. Other feathered forest dwellers such as red-crowned woodpeckers, blue-gray tanagers and oh-so-exotic blue-crowned motmots also dropped by for the fresh fruit skewered on surrounding branches. 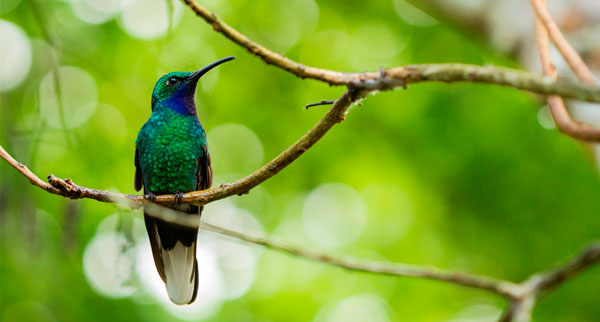 Hypnotised though we all were, Tobago’s natural beauty isn’t confined to its interior. Its coastline is edged with beautiful bays and beaches, some accessible by car or on foot, some only by boat.

While I love the look of a good beach, I’m not very good at lounging on them. Rows of sunloungers can be a big turn-off, so I was happy to see no such sight on the wild, untouched shores of the west coast, away from the busier southern stretches in and around popular Pigeon Point. I was itching to be let loose on these curves of golden sand, a wish granted at the secluded spot of Englishman’s Bay.

Tiptoeing barefoot across the small car park, we emerged through a clearing in the palms to this near-empty beach, the only sound the slow, rolling waves of the blue-green Caribbean Sea. There are no facilities here, just a shack selling snacks and a few souvenirs.

“Rows of sunloungers can be a big turn-off, so I was happy to see no such sight on the wild, untouched shores of the west coast.”

We drove on to dry out at our treetop lodge, and if ever a place was designed in harmony with its surroundings, it’s Castara Retreats. Less traditional hotel, more laid-back luxury dwelling for beach, nature and yoga lovers (classes are held each morning along with dedicated workshops throughout the year), there are 16 self-catering bungalows of varying sizes, featuring balconies that peek through the trees above Castara Beach.

The affable owner, Porridge, seemed to know everyone in the village, if not all of Tobago. Dinner, a tasty affair of fishcakes and curried shrimp, was largely spent contriving scenarios that would give me an excuse to pack up and move there. 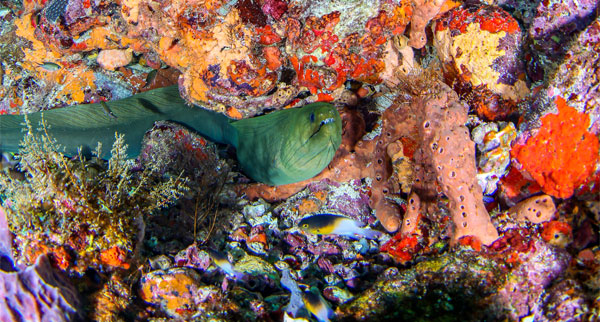 On our final day, we scooted out to sea on a boat trip with Alex Nedd, the cheery founder of Waterholics. From his base at Pigeon Point, he runs a variety of private trips including glass-bottom boat tours, stand-up paddleboarding and watersports, but we were there for the coastal tour ($120, 10am-4pm).

Stepping aboard his motorboat, we were soon bouncing our way up the west coast, with the warm, salty sea air whipping my face. This trip gives a good sense of perspective: from the water, we were able to look back at the island, and appreciate the gradual ascent of its mountainous core.

“Tobago stands in almost splendid isolation in the Caribbean for its lack of an overdeveloped tourist industry, something that truly sets it apart.”

The tour includes snorkelling stops; a leisurely dip at Nylon Pools, where we waded waist-deep half a mile off shore; and lunch in a glam set-up on the sandy peninsula of No Man’s Land Beach that wouldn’t look out of place on Love Island – bean bags and home-made rum cocktails included.

It’s one of the few ‘touristy’ experiences you’ll find here, and even this feels enjoyable and authentic. Tobago stands in almost splendid isolation in the Caribbean for its lack of an overdeveloped tourist industry, something that truly sets it apart and allows its real selling points – unspoilt nature, exotic wildlife and the warmth of its people – to continue to thrive. 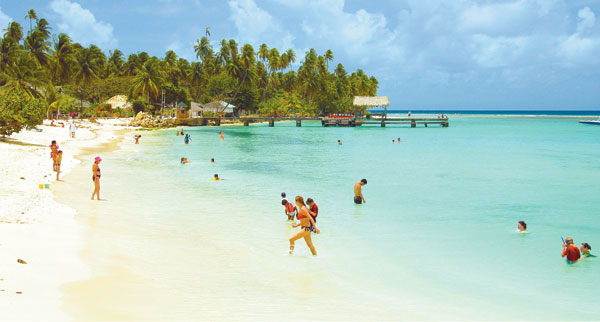 Tobago might be known for its famous Blue Food Festival (celebrating the root vegetable dasheen, also known as taro), but there’s plenty on the menu across this island. Try curried shrimp at The Seahorse Inn and cheesy breadfruit pie at Jemma’s Treehouse, then finish with homemade ice cream at Z’s Grill Shack. Also make an effort to try homemade hot pepper sauce anywhere and everywhere, as the recipes vary hugely in terms of heat and taste – it’s divine.

Travel 2 features a seven-night holiday at Mount Irvine Bay Resort from £889 between May 31 and June 21 , based on two adults sharing on a B&B basis. The price includes flights with Virgin Atlantic, transfers, 20% spa discount and one round of golf.
travel2.com

Caribtours offers seven nights’ B&B in a poolside room at Kariwak Village from £1,215, or room-only in a Firefly one-bedroom apartment at Castara Retreats from £1,085, based on two adults sharing. The prices include flights with British Airways, private transfers and access to a UK airport lounge.
caribtours.co.uk 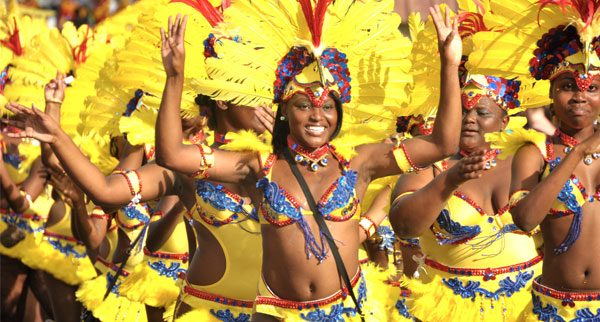 Three of the best festivals

Tobago Carnival: This festival of dancing and drinking takes place in mid-February each year, but travel and accommodation must be booked well in advance to avoid disappointment.

Buccoo Goat & Crab Racing Festival: This typically Tobagonian event, which involves goat and crab racing, is a proud island tradition that is held the Tuesday after Easter Monday each year.